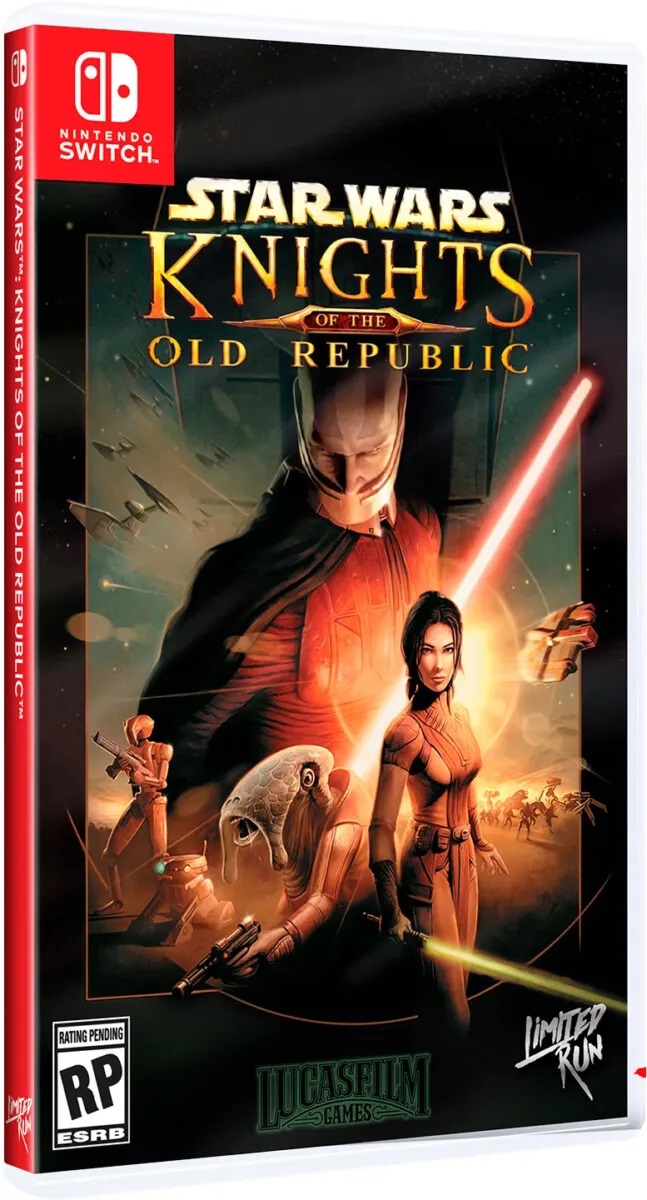 This was always one of the most well known Star Wars games. It’s pretty much a living legend and for good reason as it is a very detailed action RPG with a ton of mechanics and a detailed story. I would say it lives up to the hype as I had a blast with it. Get ready for a very difficult final level though, the more you train the better.

The game starts off by introducing us to the main character who has amnesia and is aboard a republic ship that is crashing for some reason. He manages to escape with Carth, a reputable republic soldier. They end up rescuing a Jedi Warrior known as Bastila and the three of them have a very uneasy alliance. The main objective is to stop the Sith and to do that they need to find out how the villains have amassed such an unending army. There has to be foul play at work here but finding the source of that won’t be easy. The only clue they have to go on is something called the Star Forge but what that is remains a mystery.

Right away one of the things I enjoyed about the game is all of the dialogue options. You can constantly act like a jerk, take the nice guy approach, or just go for pure chaos. The dialogue options also have a big impact on the game itself so it’s not like you’re just fluffing out the game length. I ended up not getting to recruit two members to the team because I didn’t say the right things. The ending was also very different because of the route I went. It helps to make the whole experience feel a lot more authentic to me.

The story here is also very long so you can expect to be playing this game for a long while. There is a lot of time for the characters to develop and there are tons of side quests and extra content to play. For the most part I stuck to the main story beats but you could easily add several hours onto the play time if you want to go and explore. It can also be useful for EXP as this is one game where it’s not so easy to grind. Most worlds don’t allow enemies to respawn once you defeat them so you will be stuck after you have defeated them all. I recommend beating as many enemies as you can.

The gameplay is pretty much that of an auto battler where you keep changing the moves as they fight. Think of it like you’re the head coach and the fighters have to do whatever you tell them. I would have liked to actually do the battling myself so that part of the gameplay can be a little weak. The whole “Let the A.I. decide what to do” angle usually isn’t really my thing. That said, I would say the game has a good amount of polish to it so it works out well enough. There is definitely a whole lot of depth to this system as well.

Whenever you level up you get to decide which stats and skills to increase. It’s a bit overwhelming with the amount of options so usually I would do the auto level and just let the computer decide. This can make the end of the game even more difficult so it may be worth researching what the optimal build is. Of course it can be fun to just go with your gut so choose the option that seems like it will be the most enjoyable and you can’t go wrong there.

The graphics really hold up here. I like the designs of the levels and characters. Then the actual combat looks good too and it’s all got a very distinctive style to it. It really holds up while playing this port. I also liked the soundtrack well enough although it doesn’t stand out as it’s mainly the kind of Star Wars themes you’d expect to hear. Perhaps they are iconic but at this point you’ve really heard them all before.

The character cast is one of the biggest strengths here. The main character gets a lot of development and of course because you can decide how he develops then that makes the whole game more interesting too. In fact, your choices even determine how you will fight the final boss which is massive. I had to break out all of the cheese strategies for him including using some rather villainous tactics. Look, this guy was going to keep regenerating all of his health over and over so I had to put a top to that. I succeeded and then ran away a while to regain my strength. The final boss ended up being really long but I won in the end so that’s what counts right?

The game also has some quality of life features that I would highly recommend using. For starters you can save the game anywhere. I highly advise having several backup slots at different points so you don’t get stuck. There is one game breaking bug after all which I got trapped in but fortunately I had a backup save just a few minutes away. In one of the final temples just save a lot because the glitch room is the one where there are two light towers. I can’t say I remember the exact planet though so just keep your guard up.

Then for the final boss, don’t be afraid to just run a lot. It may take a while but you’ll win in the end and that’s what counts. The Star Forge itself is incredibly difficult but one thing you should know is that the enemies actually aren’t endless. After a bunch of waves they do finish so just heal up and save between waves. Eventually you will beat them and can move forward. It had to be one of the most challenging final areas I’ve played through in a long while so it felt nice knocking that one out.

As for the other characters, Carth was one of the big ones. I like how he can’t really trust anyone and always seems like he’s about to pick a fight. The guy may not use the Force but he can defend himself and knows how to fight. He was responsible for a lot of the great banter along with Bastila. Bastila is a Jedi who is very by the books so naturally she tends to have a lot of disagreements with the main character since I tend to be more on the impulsive side. I would say the script was always at its best when these 3 were fighting.

Then you also had characters like Canderous the Mandalorian who naturally didn’t get along with Carth due to their respective backstories. Malak also made for a good villain. He perhaps gets a little overshadowed by some of the heroes but he was a very imposing presence all the same. There are a lot of other characters who get big roles here so you’ll want to play the game to see them. The game is also long enough where you really feel like you’ve gone on a full adventure by the end of it.

Overall, This is a great Star Wars game that you don’t want to miss out on. You feel like you were watching a movie here and this could really be adapted for the big screen. It was definitely a lot of fun playing it on the Switch and I can also confirm that it’s the hardest one that I’ve played. An RPG with limited leveling up functionality is definitely not something to take lightly. That said, just fight smart and have a lot of backup saves. You’ll be just fine by the end of it and if you absolutely need to, you’ll be able to go back and level up. Just don’t use up all your saves in the final dungeon because then there really is no way out!

2 thoughts on “Star Wars Knights of the Old Republic Review”