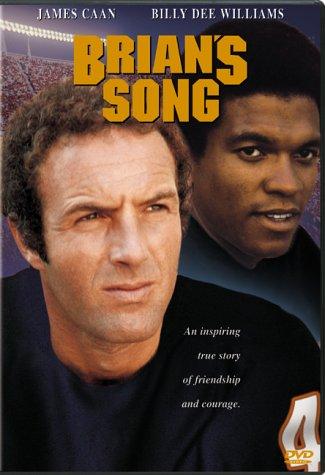 It’s been a little while since I saw a film based on a true story. Brian’s Song is a story about two NFL running backs and I have to say that I didn’t really know about either of them before the movie. They were just a little before my time but it was cool to see the NFL highlights and learn more about them through the film. I’d say that the movie does a good job with the adventure. Of course I can’t speak to how accurate it all may be, but as a cinematic experience it does the job.

The movie starts with Gale heading to practice as this will be his first season with the Chicago Bears. There he meets up with the veteran Brian who is currently the running back but he’s been in decline a bit. Brian starts off by messing with Gale a bit with some pranks but eventually they get to be good friends. Gale even ends up becoming the starter right away because of his incredible talents rushing the ball. Brian fortunately takes this in good spirits and they even get to share a room and help each other to succeed further. Sadly this cannot last as Brian becomes incredibly ill and may not make it. Can he be saved or is it all over?

As this is based on a true story I suppose it isn’t really a spoiler but at the same time if you don’t know about these events, I figured I’d keep them under wraps just in case. Either way you can bet that this is a very emotional film as movies based on true stories usually tend to be about dramatic events. Why make a movie about an every day situation right? The movie is fairly short as it’s just barely over an hour so the movie doesn’t need to try and stretch the premise out much. It’s able to just go from scene to scene fairly quick.

Of course I would have liked to have seen some more Football highlights but as it stands we got a good amount of them. The main cast is also fairly small as the true focus is on Gale and Brian. The coach gets a decent role as well and I thought he handled all of the situations well. You could tell that he was a good guy and was always willing to do what was best for the team even if it meant that he might be a bit unpopular with some of the players. He just did his job and kept it moving.

I give Brian a lot of credit for not being jealous of Gale as well. A lot of times with movie like this and even in real life you’ll see jealousy start to emerge when the starter is overtaken like this. In any sport there is a lot of pride involved and even more once you’re at the top. You know that Brian wished he could be out on the field but he would just use that as motivation to work even harder as opposed to trying to take any shots at Brian. It was the right attitude to have and it was a real credit to his character.

That brief time where he got to be the starting fullback while Gale was the starting running back was definitely the deal point in their careers. Meanwhile Gale did everything the right way too. He kept on going with 100% effort on all plays and didn’t hold back just because he was friends with Brian. Gale was as supportive as he could be and they really did get along quite well. Gale even overcame his fear of public speaking to give a good speech about Brian later on.

The talent never went to his head and you could see how Gale was incredibly good at playing during his games. One of the fun parts of Football is making friends and getting that feeling of comradery and this movie really handled that quite nicely. Whether you’re a fan of Football or not I think you’ll be able to appreciate the film’s strong writing and solid main characters. The pacing is good and it’s just a well made movie.

It would be nice if the film could have had a happier ending but at the end of the day when you’re based on a true story there is only so much that you can do. Ideally it would be fun to change things a bit so that everyone runs off into the sunset but doing that would likely not go over very well with the viewers. You’re expected to follow the path wherever it takes you and so this film did that.

Overall, Brian’s Song is a good movie. There’s not a whole lot to say about it in part because of how short the film is but also because the plot is very direct. It’s not the kind of movie where there is a lot of lore to talk about or scenes to explain in detail. It’s really a film about bonding over Football and dealing with life’s challenges as they come. So if you’re up for a rather heavy film then this is a good one to check out and the timing is good since we are in Football season right now. It can help you pass the time by until the next games start.