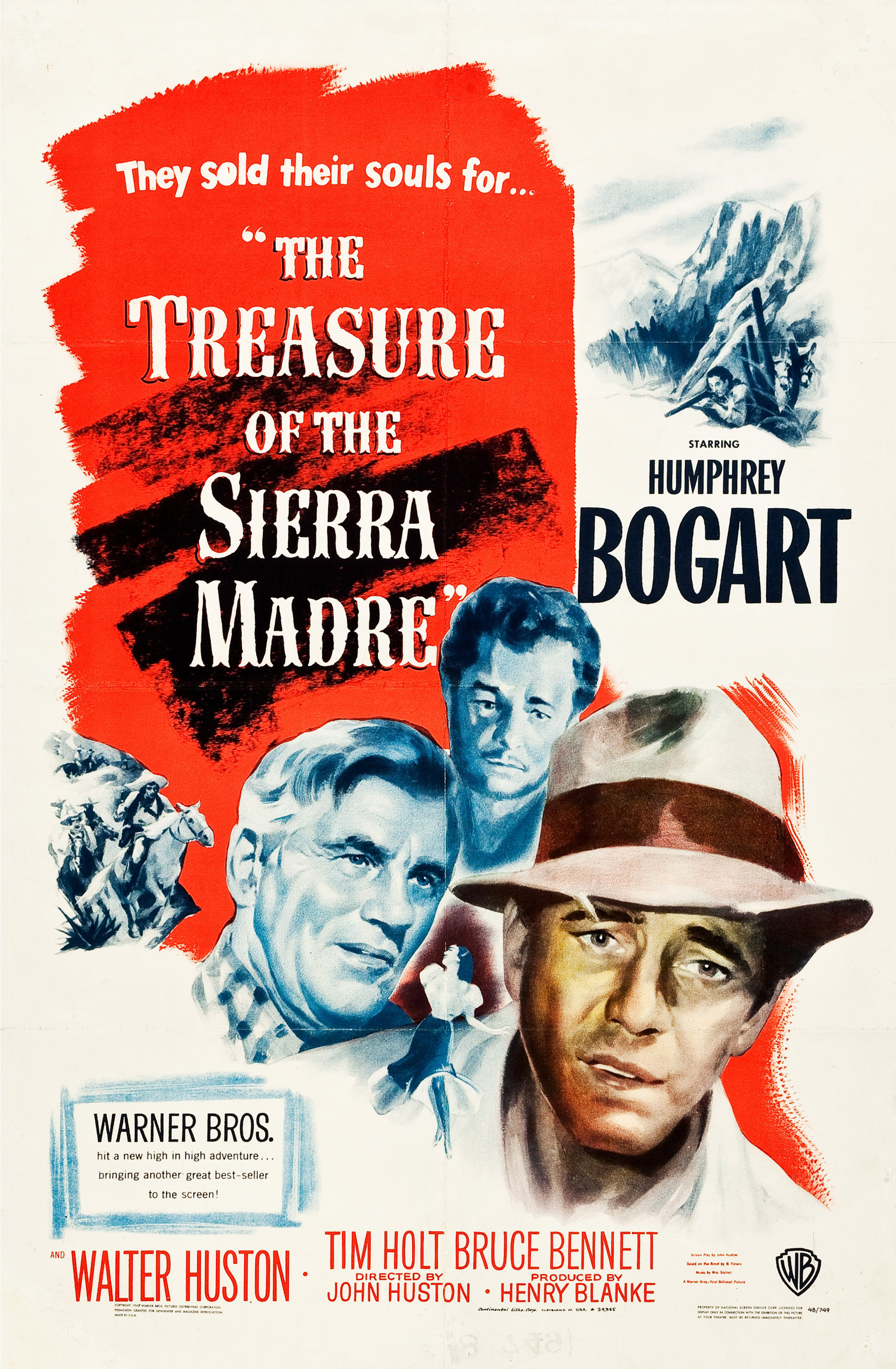 Now this is what I would call a very good western. We’ve got an interesting cast here with a main character who is very quickly turning crazy. Usually it’s a slow descent into madness but this guy is on a speed run and nobody’s gonna be stopping him. It shows how greed can really take you out if you don’t keep your guard up at all times. Also if you aim to be rich, be careful about making this a team sport.

The movie starts by introducing us to Fred and Bob who are really down on their luck. They’re basically penniless and just got scammed by someone. Just when it looks like they are doomed to be on the street for good, they run into a guy named Howard who says that he used to be great at gold digging and even got rich but he spent his fortune away. Fred and Bob figure they’ll take their chances with him and things go well…almost too well. Now that they are taking in all of the gold they don’t know when to stop. Can they stop?

Now this is one of those films where the conflict only happens because one of them is completely insane. If not then this would have been simple. You make enough money to last the rest of your life and go home. It’s easy and now you’re all set. Unfortunately Fred just wants more and more while also growing more paranoid. As the film goes on he basically becomes the villain here. It’s a little hard to just leave as well for most of the film because there’s always the chance you’ll get shot in the back. All 3 characters have a gun after all.

Now, I do think Bob should have just shot Fred after a point. Once he realizes that Fred is out to murder him, you have to move first. If he doesn’t want to cross the big line then he could just shoot out a leg and tip the authorities to come and find him later on. I think those would have been very safe options that would have really done the trick here without just being in harm’s way the whole time. In the end he was just a little too merciful which nearly got him several times.

Bob is a nice guy and he deals a fair hand to everyone. He likes money and gold as much as the next guy but he doesn’t let it control him or anything like that. It’s why it’s easy to root for him. Fred on the other hand is one of those guys who gets corrupted real easy. I like how he’s a total tough guy and tries to intimidate the others in every scene but it’s just too bad that he couldn’t keep this in check. Ultimately there is always someone tougher out there and so he just put himself on a path where there was absolutely no winning. Things get a little tricky for him.

Part of why the film succeeds though is because it is always tense with all of this happening without trying too far with it. A lesser film might have had Fred get tortured by the end or completely broken as commence for what he was doing but this one just stuck to the basics. I’d say Fred got his just desserts well enough without dragging things out. The movie doesn’t have any horses getting blown up or making the usual western mistakes. Instead it played things by the numbers and did well for itself.

The cast was also solid which helped a lot. Fred was a great villain and I liked Bob as a hero. Howard was a solid wild card as I can’t say that I trusted him at all as the film went on. He always seemed a little off and it was nice to have a crazy wild card like this guy. He always said the silent part out loud about how the main characters might want to double cross each other. He seemed to enjoy increasing the stakes and messing with them the whole time. He was playing with fire but the guy never seemed nervous. Howard really was an old pro.

Finally you had Cody who is not nearly as smart. The guy wanted to get rich as well and didn’t care how many times he was told off by the others, he just kept on coming and trying to shoot his shot. On one hand I do think it’s impressive just how determined the guy was but at the same time I just don’t think it was worth it. Is getting rich really worth putting yourself in the line of fire with 3 guys who all seem dangerous? Fred wasn’t exactly subtle with how he was threatening Cody after all so it’s not like this was a vague danger. It was a very specific risk that he would lose his life in this endeavor.

Additionally you also have a lot of bandits and other villains running around. It’s no exaggeration to say that there was danger around every corner. Not the safest place to be so it’s another reason why you want to grab your gold and run off. The local cops actually looked really good here by the end as well. It may not be possible to stop the bandits all of the time but once they have their sights on them, it’s only a matter of time. They run a tight ship in that town.

Overall, I was pleasantly surprised by this film. It did very well for the genre and the writing was just really consistent the whole way through. If you’re looking for a tense film that also speaks to the risks of riches then this is the one for you. The characters really get to learn why getting rich can be a danger in itself. The ending also works well with the theme of the movie. It may not be the happiest ending out there but it gets the job done and you’ll feel satisfied with how the movie turned out.