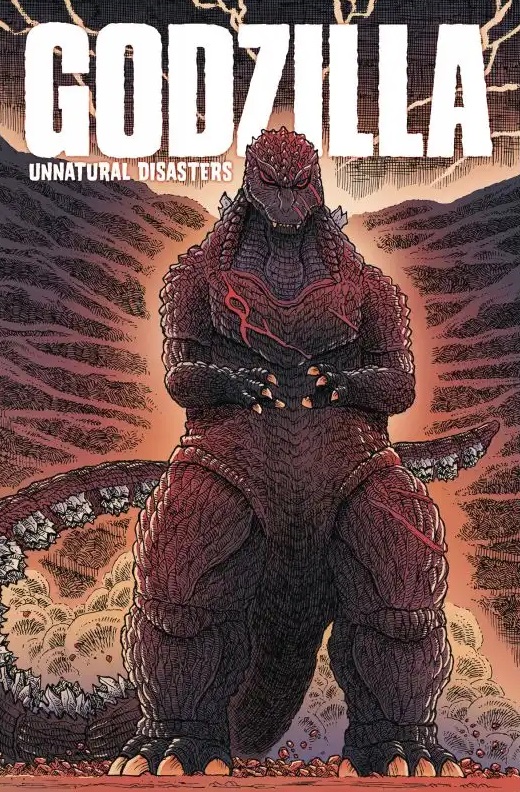 Godzilla has returned to destroy everyone who gets in his way. He has long been known as the King of the Kaiju but in this collection he has to go up against all kinds of opponents. It’s a pretty solid collection with a whole lot of stories within it. I had a good time here and I would definitely recommend it to any Godzilla fan. You’ll get all of the action that you could want and more.

From the 3 titles in here I already read the Godzilla in Hell saga so I’ll go over that one a bit quicker. See Godzilla gets taken to hell by some kind of demon and it’s heavily implied that Godzilla has to overcome every challenge of hell in order to escape. This means overcoming physical threats as well as mental ones. Nothing is particularly effective against Godzilla though and he just continues to barrel through the place with ease. It’s impressive just how powerful Godzilla is. The guy is absolutely unrelenting and looks really impressive here. A lot of the monsters he fights with have very unique designs as well. Part of the hype here is that the whole saga is shrouded in a lot of mystery. Even by the end you have to use a lot of headcanon to decide exactly what happened.

The art is very solid and the pacing is good so I didn’t really have any issues with this one. It’s also very unique so I’d say that any Godzilla fan should really appreciate the experience. You know that you probably won’t be seeing anything quite like it any time soon. I think this would be the perfect story to turn into a movie because it would just be so out there that it should catch people’s eye right away. How could you turn away from a film with this kind of premise right? Now for the other two story collections they have a more traditional approach with humans running around but not all of them. We’ll dive into the Legends issues first.

The first Legends issue focuses on Anguirus who is a super big underdog but the humans talk fondly about how he never backs down from a fight. You can take this as a positive trait in that he’s super brave or you can take it as a negative one in that he is very bad at understanding power levels and jumps into flurries that he knows he can’t win. It’s a solid first issue but man does Anguirus need a power up. It feels like someone is giving him the McDonalds combo every time he steps into a fight. When’s the last time he got a definitive win against anybody? Because I can’t think of a single win for his character and that’s unfortunate.

The second issue is definitely a lot weaker though. So this crazy scientist has a Rodan egg and gets obsessed with it. The government isn’t happy because of how dangerous it is and get ready to destroy it so he runs off. His son gets picked on a lot and wanted to show off so he helps his father keep is secured but then the Dad gets arrested and the kid is potentially bumped off. This was probably the only issue in the collection where the Kaiju was completely put to the side in favor of the human plot and that’s what hurt this one quite a bit. The humans were just super annoying the whole time and that’s not what you want to see here. In general the humans are usually not great in the Godzilla comics as you sort of tune them out and wait for Godzilla to return but these guys really stuck out as being rather annoying.

Now the third issue is definitely one of the standouts here. So we have these telepaths across the world who can control Kaiju and the main character is taken to one of these schools to be trained. It’s like something out of Assassin’s Creed as they emotionally manipulate him the whole time and we get a real solid twist involving aliens. The humans were actually rather interesting this time around and it’s a shame that these are all one shots because this could have had a real solid continuation. Titanosaurus got to look good as well, well maybe not in the sense that he was being mind controlled but he looked good in a power context and that’s what you want to see. Throwing in a solid cliffhanger like this one did was pretty effective.

Issue 4 continues on a very solid note as we see Hedorah enter the fray. This time the humans have a Mecha Godzilla at the ready but are still unsure if he will be enough to really help them be victorious this time around. The story has a good amount of tension and they have to decide which monster to take down when Godzilla appears. What I liked about this one is that Hedorah really got his respect. He’s one of the few Kaiju who was actually more powerful than Godzilla when they first fought and so I wanted him to look powerful here. That definitely did happen as the humans had to get involved. It was an emotional story and one that has a satisfying conclusion. I dare say fans all around will have a good time with this one.

The final story is a bit more low key as an old danger climber goes on one last hike. This time he’ll be climbing Godzilla and it’s the most daring thing anybody had done. Godzilla’s filled with radiation so this gets dicey but it’s interesting to see someone hanging on like this. I’m sure Godzilla could have removed him a any time but just wasn’t bothered enough to do so. He knows that no human can hurt him anyway so what would be the point right? It’s a reasonable attitude for Godzilla to have when you really think about it. It works as an emotional climax here especially with the final scenes.

Now we dive into Rage Across Time as we see that Godzilla has been terrorizing the world for centuries at this point. He’s just built different and not even time can get in his way. In the first issue we have him going up against a bunch of samurai/ninja which makes for a pretty unique setup. Personally I tend to like trips to the future a lot more than trips to the past but I get the concept of the series. If a modern military had trouble with Godzilla, imagine back then right? Fortunately other Kaiju are around as well so this leads to a lot of big fights.

Then in the second issue we have the Greek gods trying to unite in order to fight off Godzilla. Thing is they’re really bad at that. None of them get along at all and you can throw the lion’s share of the blame onto Zeus for this. Zeus is just being mean for no reason right out of the jump and it only gets worse from there. Since the gods power comes from the prayers of the mortals he enters the fight in a weakened state because he has been distant for so long. No johns though, Godzilla would have beaten him anyway. There is a good reason why he is known as the King of the Monsters after all. It was nice to see how out there these fights were. It really felt like a very hype supernatural encounter and not just Godzilla beating up on other Kaiju and humans. A very solid issue.

The third issue was a bit different than the others. So it had the knights of the olden days and there was a plague around so they go to Mothra for help. We get a nice fight with Mothra and Battra while the corrupt people across the kingdom mess the knights up. It was interesting but just felt a lot different from the others since Godzilla didn’t get to do a whole lot. A decent issue but Mothra isn’t able to hold her own issue quite as well as some of the other Kaiju. Regardless you should have a good time here.

This 4th issue may be the weakest of the set so you can see how it’s losing a bit of steam here. Godzilla shows up but this time he actually has trouble against humans as they put a lot of snow on him. It may be a tribute to Raids Again but this one suffered from the main issue of the humans getting too much screen time. Nobody really cares about the humans here…no offense to the humans. But I’m reading Godzilla for the Kaiju and the fights and this was the only one that didn’t really deliver in that respect.

This last issue gets real crazy as a bunch of Kaiju all appear and it becomes a whole nonstop fight from all sides. That was great and definitely the right way to end things off with. You barely even remember the story of this one beyond everyone just duking it out and that’s fine by me. Throw in Orga and then you’d really have a party. One issue for the future would have been nice to show that Godzilla is never over but I suppose it just wasn’t to be this time. Maybe next time.

The artwork is mainly solid during the issues. It fluctuates a bit but on the whole I was satisfied with it. You get to have the Kaiju with solid proportions and the fights are on point so that’s the important thing. By the end of this adventure you will be having a good time all around. The writing is good and there is a whole lot of content here so you will be able to enjoy Godzilla in his full glory the whole time.

Overall, If you haven’t read this comic yet then you definitely need to change that. All big fans of Godzilla owe it to themselves to check this out because it is just such a great collection of issues. You’d be missing out if you missed on this one. I would like to see more of a proper ongoing return with some really big plots in the verse but think of these like best hits and stories that could have certainly been movies in their own rights. Look at the issues through that lens and then you’re really all set. I have another Godzilla comic to check out pretty soon so that’ll be hype.