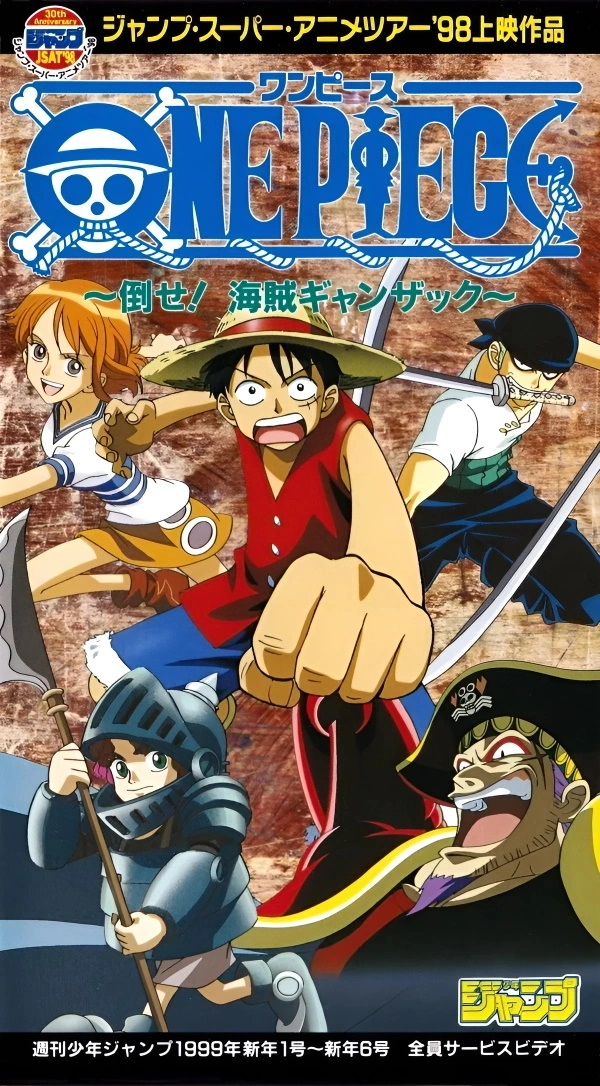 It’s time to jump far into the past with this one for a retro One Piece adventure. It’s a full original story with just the first 3 Strawhats so that’s pretty fun. The team has grown a lot over the years but there’s still something special about seeing the first crewmates team up to take a villain down. The special goes by very quickly but makes the most of its roughly 30 minutes. We get some good action here and Luffy gets one step closer to being the King of the Pirates!

The story starts with Luffy and the crew chilling on a boat when they are attacked by a giant monster. Unfortunately they are at sea so Luffy isn’t able to fight once he hits the water and this prevents Zoro from claiming the easy victory because he has to save Luffy. So Nami is kidnapped and eventually Luffy finds himself on a mysterious island. He saves a girl named Medaka from two pirates and finds out from her that the pirate known as Ganzack has taken down the whole village. They no longer have enough food to survive and need someone to save them. Luffy may not be a traditional hero but he likes his food so he is ready to help.

Ganzack actually does rather well as the villain here. For starters he actually takes down Luffy twice which is likely way more than anyone was expecting here. He just takes him down like it’s nothing and you may expect that once, but twice? Granted Luffy was much weaker back then but it’s still fairly unheard of to be taken out like that. Ganzack also talks about being the King of the Pirates several times which helps to really establish him as a big threat. He’s not someone who’s just playing around here but trying to accomplish his dreams.

There isn’t much more to his character beyond this but it’s enough to still make him a solid villain. I liked his fighting style with the little crab arms. It wasn’t something that you’d quickly forget. I dare say Zoro would have had a tougher time beating him though. This was early enough in the series where you could make the case that Zoro was stronger than Luffy. Some would say Luffy didn’t truly pass Zoro until he obtained Gear 2 but it would be a fun debate either way.

Regardless Zoro definitely looks great here though. He commands a lot of attention as the pirate hunter and pretty much takes down the whole army on his own. He didn’t need any help and he didn’t take any Ls. He was just around dominating the whole time with his 3 sword style. Meanwhile Nami is surviving as bet she can with a little trickery and it makes sense as a strategy. When you can fool the villain really easy then you may as well do that right? Luffy and Zoro should still have enough confidence in her not to think that she has actually turned evil or anything like that. I’m cool with the plan because it didn’t seem super risky and it’s not like she had to do anything villainous in order to gain Ganzack’s trust. So it worked out pretty well.

Meanwhile this is probably not Luffy’s best appearance since he was getting wrecked so often but I guess we can chalk it up to him being overconfident. By the end he was ready to make his comeback and start winning. It just took him some time to really get settled. Luffy gets credit for not backing down from a fight although that’s the bare minimum for any good lead.

It’s definitely interesting seeing One Piece with such a different animation style. It feels extra retro and not having the same sound effects when Luffy does his attacks will take a little getting used to. Still, I think this group could have done a fine job with the series. I liked the speed showings they gave to the characters and the action scenes are on point. I wouldn’t call this high budget but it has aged well enough so it works on that level. The soundtrack is more on the forgettable side for the most part. There are a few scenes where it feels like the music is about to pick up but then the scene ends real quick before that can happen.

The special is really short as I mentioned but it does work well. You’ll be engaged from start to finish and it’s really just a chance to see the characters get to fight some villains. It would have been nice if Ganzack had a right hand man or something so Zoro could fight him instead of the normal minions though. That would have helped make the film even cooler but this way at least they had Zoro taking on the whole army.

The original character here was also not bad. Medaka may just be a kid who wants to help her town but she doesn’t get in the way and actually saves Luffy twice. Once directly and the other indirectly by triggering his rage mode. So she really did a good job here and was likable which isn’t always easy for the heroes made up for the movies and specials. In general the writing here was on point which really goes a long way to making this a solid special.

Overall, If you’re looking for more One Piece content then this is a special you will want to check out. Ganzack makes for a memorable villain and there is a lot of action here so that’s all you really need. There is never a dull moment here and everyone gets something to do. It’s too bad they don’t make short specials like this quite as much nowadays. Personally with how One Piece sells I’d be trying to generate one of these every year. I’m sure the profits would be enough to cover the expenses each time. Maybe have a dedicated company that would handle these so it doesn’t impact the show.