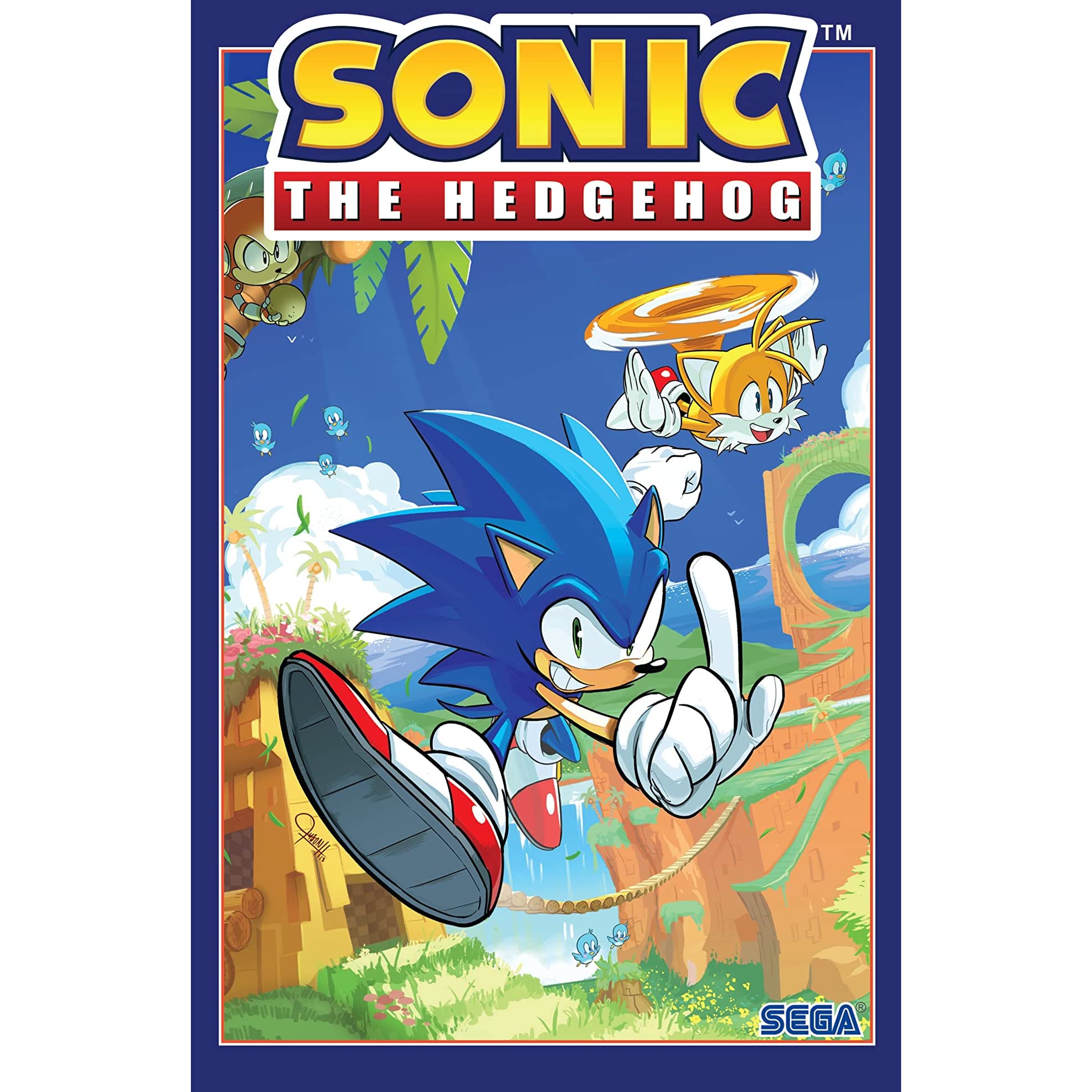 It’s time to finally jump into the world of Sonic in the more recent comic series. Sonic has had a ton of epic comics over the years and you’d expect no less from the greatest video game series of all time. After playing Sonic Frontiers it was pretty good timing to be reading this comic. It really is a great way of starting off the saga. I had a blast and look forward to seeing how things go from here.

The story kicks off fairly quick as Sonic takes down a bunch of Eggman’s robots. After the events of Sonic Forces Eggman vanished but his army remained. They now randomly attack across the planet and so the heroes must all join forces and do their best to stop these bots. The problem is the sheer numbers of them and more are built by the day. So while they may not be a threat to Sonic and friends, the world is quite large and people will continue to be at danger until they’re all taken down. This volume brings 4 issues and right now they’re all fairly stand alone as we start to learn more about the overall threat.

The first story involves Tails as Sonic teams up with him to stop the robots. Then we have one for Amy, Knuckles, and finally Tangle. In each comic Sonic shows up to save the day but it becomes clear that the robots do have some kind of a master now. The attacks have grown coordinated and more powerful robots are also showing up. Sonic is as confident as ever but the rest of the heroes are getting a bit nervous at this point. Can they really hold out against such an onslaught forever?

My first big praise for the series will be the action series. Perhaps it’ll feel like a given that the series has great fights but there is a lot of detail to the action in each issue. There will be whole pages of no text, just action as the heroes use combo attacks and take the enemies down. I like that there is a lot of choreography here and actual back and forth. These aren’t one hit KOs or anything like that. Instead you’re getting actual battles through and through which is a great thing. Sure the robots aren’t a real threat to Sonic but that’s not really the point anyway. You’re here to see what he can do with his speed and I like the combos are are used all the time.

The writing here is also great as you would expect. Sonic is as confident as ever and takes all the villains down easily but he has the skills to back it up. He’s never overconfident and he’s also still very mature. When the other heroes want to get deep or talk about something important he doesn’t brush them off and still has a reasonable answer. His conversation with Amy about joining the resistance was a very good conversation. Nobody jumped to conclusions or anything, just a solid talk where they each explained their points of view and that was the end of it.

As a result I’m happy to report that all of the characters were solid here. Tails also looks good and while he may still be a little on the nervous side, he can still fight and defend himself. This is Tails closer to his best like in Adventure 2 Battle and I like that because he absolutely has proven himself many times at this point. It’s fine to be a little nervous especially with Sonic being taken down by Infinite and pals in the past but he’s not whining about it or anything like that.

Meanwhile Amy looks really good here as well. She’s keeping her feelings in check and doing a great job as the leader of the resistance. (She’s basically the leader at this point) She can still fight a lot and of course she would love to go with Sonic but she chooses her responsibilities first. Amy has come a long way and this really makes her a much more endearing character. You can also sympathize with her one sided romance towards Sonic more now that it’s not portrayed as this crazy gag that’s always around. Holding herself back and just trying to go about things normally is a great move. Even if Sonic were to vanish again, I think she’d be able to keep the resistance in good shape.

Then we have Knuckles who is on point here. He always has a great dynamic with Sonic and you know that the two of them can take on any threat that gets in their way. They have a good fight against two new fighters who showed up and I would take these two against just about any villain combination. I can also see why Knuckles is eager to go back to Angel Island since actively running around and getting results is really his thing. He’s not the kind of guy who usually just sits behind the desk and it fits in with his character.

Finally we have Tangle who is new for the comics and she’s been a fun character so far. I know apparently there is a reference for her within Sonic Frontiers as well so she may even get to the games soon. Her tail makes for a very handy weapon in combat and she can take care of herself. I’m not sure I totally have a read on her personality yet but she’s strong and is a quick thinker as she helped Sonic and Blaze take out the enemies. I look forward to seeing more of her later on.

Meanwhile Blaze did get to appear as well which was fun. She shows up rather suddenly but that’s the fun part of time travel. The comics are already hinting that something major is about to happen and I’m absolutely ready for it. Imagine if Infinite returns soon? We already have a mysterious villain talking tough in the background and planning things out so I’m looking forward to seeing who that is. Shadow hasn’t appeared yet either but there will be time for that. The comics are slowly re-introducing all of the characters which is a good way to start things off. I also like how they show that the Egg robots can be a decent threat when there are enough of them.

I was always skeptical about the world being taken over without Sonic and I still am to be honest since the game never gave a good reason for why Shadow wasn’t around taking everyone out. I consider that to be a bit of a plot hole but the comics are doing good damage control here. I also just like the continuity being present here because it just adds a little extra immersion to the whole experience.

It almost goes without saying but the art is really solid. All of the characters stand out and the colors are bright and vibrant in general. This all looks fantastic all the way around and it makes reading the comics a breeze. I hope they keep this artist for the full run if possible because it would be difficult to top this.

Overall, Sonic is off to the races once more. I always thought the Archie comics were fantastic as well so I was sad to see them go but hopefully this new ongoing will continue for a very long time as well. I think Archie had something like 700 issues so for me I first want to see 100 total issues and then after that I’d like the series to reach 1000. Of course that will take years to do but it would be a really fun goal. If you haven’t read the comics yet then you definitely should. It’s got everything that a Sonic fan could possibly want!