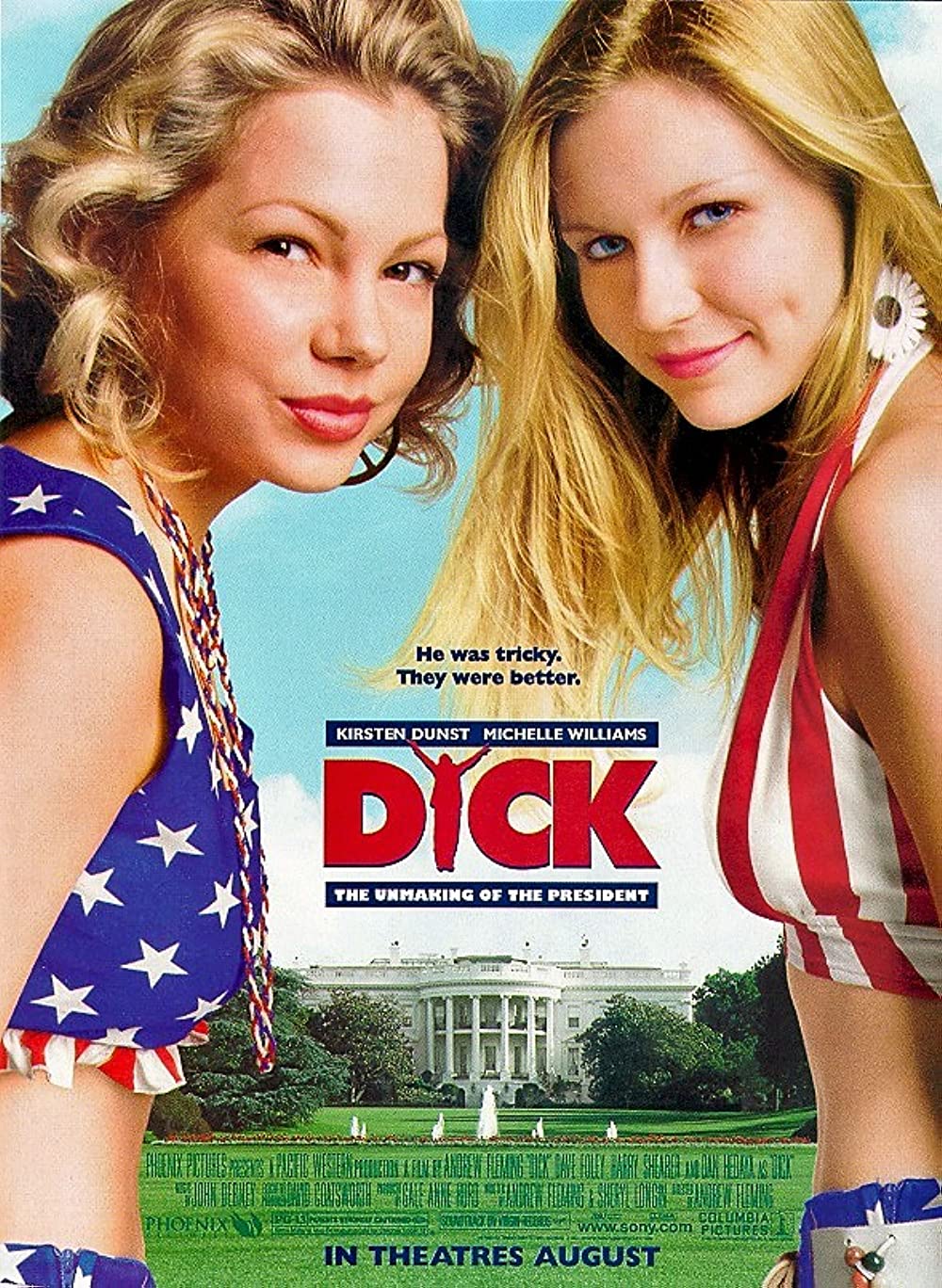 The concept here isn’t bad since you could think of it like an alternate version of Bill and Ted. The real problem is really just that the movie isn’t too clever. It goes for the obvious jokes right away but after that there isn’t much left. Even the obvious joke doesn’t work since I know a Richard who still goes by the short version so the name isn’t dead yet. There was a good amount of potential here but right from the jump you get the feeling that it won’t live up to that.

The movie starts with a flashforward as a news guy tries to trick Woodward and Bernstein into revealing their source for the whole Watergate scandal but they don’t fall for it and then we find out what happened. The movie revolves around two teen girls, Betsy and Arlene. They aren’t very smart at all and can’t keep a secret for more than 5 minutes. One day they happen to be near a heist which ends up becoming a big deal and the White House staff has reason to believe that they know more than they should about Watergate. So President Nixon decides that the best way to keep them quiet is to keep them close and hires the two to be his official dog walkers. They have fun with that since who wouldn’t want to walk a dog in such a prestigious place right? Arlene even falls for Nixon but little do they realize that he is as corrupt as they come.

The film has fun making Nixon as big a bad guy as you can imagine. He is practically making evil plans in every scene that he is in. The guy is always planning something negative at the very least but the girls just never notice. It would take a whole lot to get them to realize that he is the villain so of course he keeps pushing the envelope further and further until they have to notice. If he would just pretend a little harder and not make obvious mistakes like leaving the tape recorder active then he would probably have gotten away really easily. Ultimately he wasn’t the smartest character either.

It’s always intense to see how the White House used to look though. It’s hard to imagine people just walking in and going upstairs like you see in this movie. It’s just all very lax and Betsy/Arlene really have the run of the place by the end. One unfortunate subplot for the whole staff is that they start making spiked cookies unintentionally and of course everyone loves them. This even helps with global peace so it shows what a strong meal can do.

From the main two I would say Arlene is the main weak link. She just gets crushes on people way too quickly as she already had another crush at the start of the movie. Just jumping from crush to crush like that in an instant is definitely a bad move. Then for Betsy she is a lot more outgoing and aggressive but that can be a detriment as well like when she has an affair with a random guy just to buy time for the tape to be stolen. It’s a really desperate plan that’s for sure and one that’s not worth it. Better to even try knocking him out but otherwise he seemed like the kind of guy who wouldn’t mind if the two just ran in and stole the tape. He probably wouldn’t even realize that was happening at that point.

The main focus of the film is how the two girls manage to have a massive effect on the president’s office and how every big decision actually went through them but it’s not a premise that can stand on its own without any backup. I don’t even think you need to make the two girls smarter necessarily because you can absolutely have a fun film with the characters not knowing anything. You just need a really clever script though and this film doesn’t have that.

Then you have the two reporters. I actually thought Woodward was solid and he did a good job of getting intel and always trying to be on top. I liked that guy but his partner was on the annoying side. Bernstein never really helped on his own and would only show up to steal the credit. Seems like an annoying guy to have around and I can see why Woodward was always upset. Here he is putting in a lot of work to grab the biggest story of the century and he’s only going to get 50% of the credit. That’s rough.

In a way it worked out that Nixon was the villain because if the president was a good guy then he may have been in trouble with how the main two immediately started spilling all of their secrets out to everyone. They did not hold the secret at all and that’s a shame. It’s another moment where they look really bad even if that is part of their characters. This is exactly why you need more than just the two off them wandering around and having stuff just happen. Maybe throw in a paranoid White House worker who starts following them or have the girls live at the White House instead of going there part time. They could keep hearing new confidential topics over and over which would cause more issues to keep occurring.

You need something to keep the film fresh for longer than it was. Without the writing improving it’s possible that this would just drag the film out instead of saving it but that’s really the best way to try and start working on making this one better. There is barely a plot here beyond the original premise so there isn’t really a whole lot to discuss here either. Either you will like the main dynamic the girls have or you won’t. That will make or break the film for you and it’s really that simple. There just aren’t a lot of other things going on here and the film can largely be aimless.

Overall, This movie isn’t all that good. It may give you a smile once in a while but there was just so many more things they could have done with the film. It wasn’t nearly as funny as it should have been and that’s really fatal for a comedy movie. There really isn’t much replay value to be found at all here. This movie could absolutely use a remake to see if they can do the premise a little more justice. I definitely think they would do better this time but we’ll see. It’s always a fun line of making things funny without making it too forced.