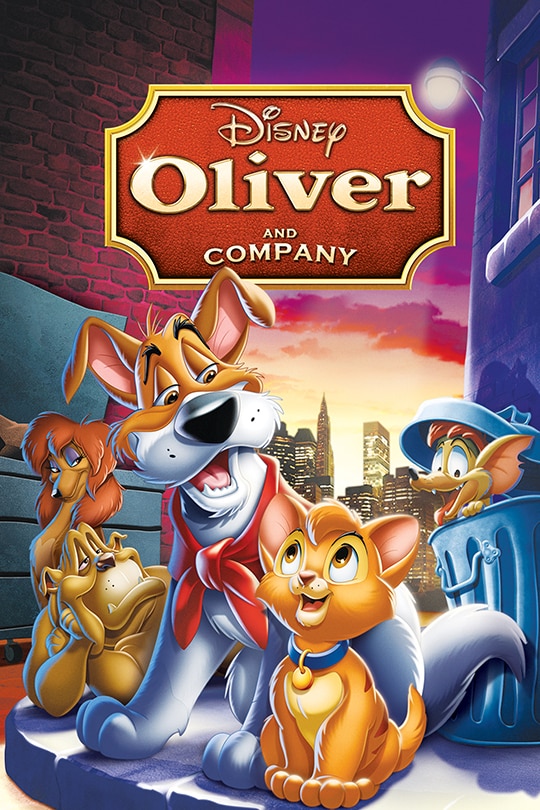 It’s time for a fun animated movie that I don’t recall hearing about back in the day despite it seeming like a fairly big deal. The animation is on point and it seems to have a good budget at any rate. It’s a fun film and one that can be surprisingly intense with how things go for the villains. It has aged well and the movie has really good pacing. There isn’t much to find fault with for this title.

The movie starts with a cat named Oliver not being adopted so now he is lost and alone in New York City. It looks like things will be tricky but he quickly meets up with a dog who is very street savvy. This guy’s name is Dodger and he seems helpful at first but tricks Oliver into helping steal a hot dog and then runs off. Oliver corners him at the home base but Dodger has quite a lot of friends there. Fortunately they’re a little nicer and so Oliver is entered into their group. Basically they find lots of little gizmos and knick knacks for their owner Fagin. He is in a tough spot and owes money to a tough guy named Sykes. It’s a fun enough job for the pets but then Oliver ends up meeting a little girl named Jenny who is super rich. He can now have the time of his life but can he really leave these other animals who were so good to him? It’s a tough call.

This is one of those movies that feels like it’s always moving. Each new plot development doesn’t take much time to stop as it just keeps going. It’s a good thing and so while this may sort of be the basic plot, there’s always more going on but you don’t want to give away too much. At the end of the day it is a bit of a tough call but you could make the case that Oliver didn’t have many doubts. And he shouldn’t. He got into this situation because he wasn’t adopted so finding a nice owner is really perfect for him. Sure it’s rough for the other pets not being able to have an easy out like that but they shouldn’t begrudge Oliver his opportunity.

Things worked out perfectly for him and that’s a great thing. Hopefully the situation will continue to go like that and then maybe the others will have their shot. Dodger was the most petty about this. For the most part the other members of the crew were actually understanding on this but Dodger just got way too offended. I get that it was a shock but I would have liked him to have been a bit nicer about this right up front. It did hurt his character a bit with how hard he made things on Oliver.

Oliver was a good kid. He may be young and not know as much about city life but he still did his best at every opportunity which is what counts. His owner Jenny also did her best. She takes a big risk in heading outside to try and help Oliver when he’s held for ransom and she is a nice kid. In the end that’s why this is such a nice situation for Oliver.

As for Dodger’s friends, Tito is more on the annoying side. He’s one of those guys who talks really tough and is always picking fights but he can’t really fight. So it’s closer to just being full of hot air. Look I do like confidence in general but you have to be able to back it up. His flirty nature can also get out of hand a whole lot. Einstein is a decent dog but doesn’t do a whole lot in the story next to the others. Georgette is the spoiled dog who is Jenny’s first pet and doesn’t appreciate having another member of the family there.

You get it since that would be a big change and she has always lived a really pampered life. It would take a lot of adjusting and so she wasn’t really my favorite character but gets better as the movie goes on. Rita seems to be the wise member of the hero group who never really panics and tries to de-escalate things. She did a good job there and then you have Francis who is a bulldog so you know he can fight but unfortunately he is usually outmatched against Sykes’ two dogs.

Sykes is the main villain here and he has two rottweilers that are powerful enough to threaten the entire group. They’re definitely not to be messed with and make for very intimidating villains. At any point they could crush the heroes if given the order by their boss so the group always has to hope that this doesn’t happen. Occasionally the heroes will try to hurl some kind of insult but they usually regret it right after.

Then Sykes himself is a very impressive villain. He has complete control over the situation right from the start and is clearly not someone to be trifled with. He was really close to winning it all and he didn’t get to be the top mobster around by being nice. This guy earned a lot of respect from the underworld and rightfully so. He made for a very entertaining villain but perhaps because he was so mean the film didn’t mind really going in against him during the climax.

As I mentioned before the climax is really serious for this film. They definitely weren’t trying to scale things back for the kids. At the end of the day it’s a level that I think is fine for a kid’s movie, I was just surprised by it. The film is never too detailed or anything so it avoids my usual animal violence issues. Would I change a few things about the climax? Sure I definitely would but it’s still a fun film that I could easily recommend. It doesn’t even try to force a bunch of songs into the mix to destroy the pacing.

The animation for the film is also fairly sharp. It’s very expressive which I like to see and you can always tell what is happening. I appreciated the detail here and the movie really got a good budget backing it up. It’s very smooth and so I definitely have no issues with it. It really helps to enhance the movie which was already solid.

Overall, Oliver & Company is a good movie. It has some fun humor and quality characters but at the end of the day the main strength is that it’s a well written title. It doesn’t have any real issues that would end up hurting it down the stretch. It’s the kind of movie that you can watch at any time so whenever you have a good moment you should check it out and see what you think. Maybe eventually this one will be more popular and be widely known across all of the animated movie circles.