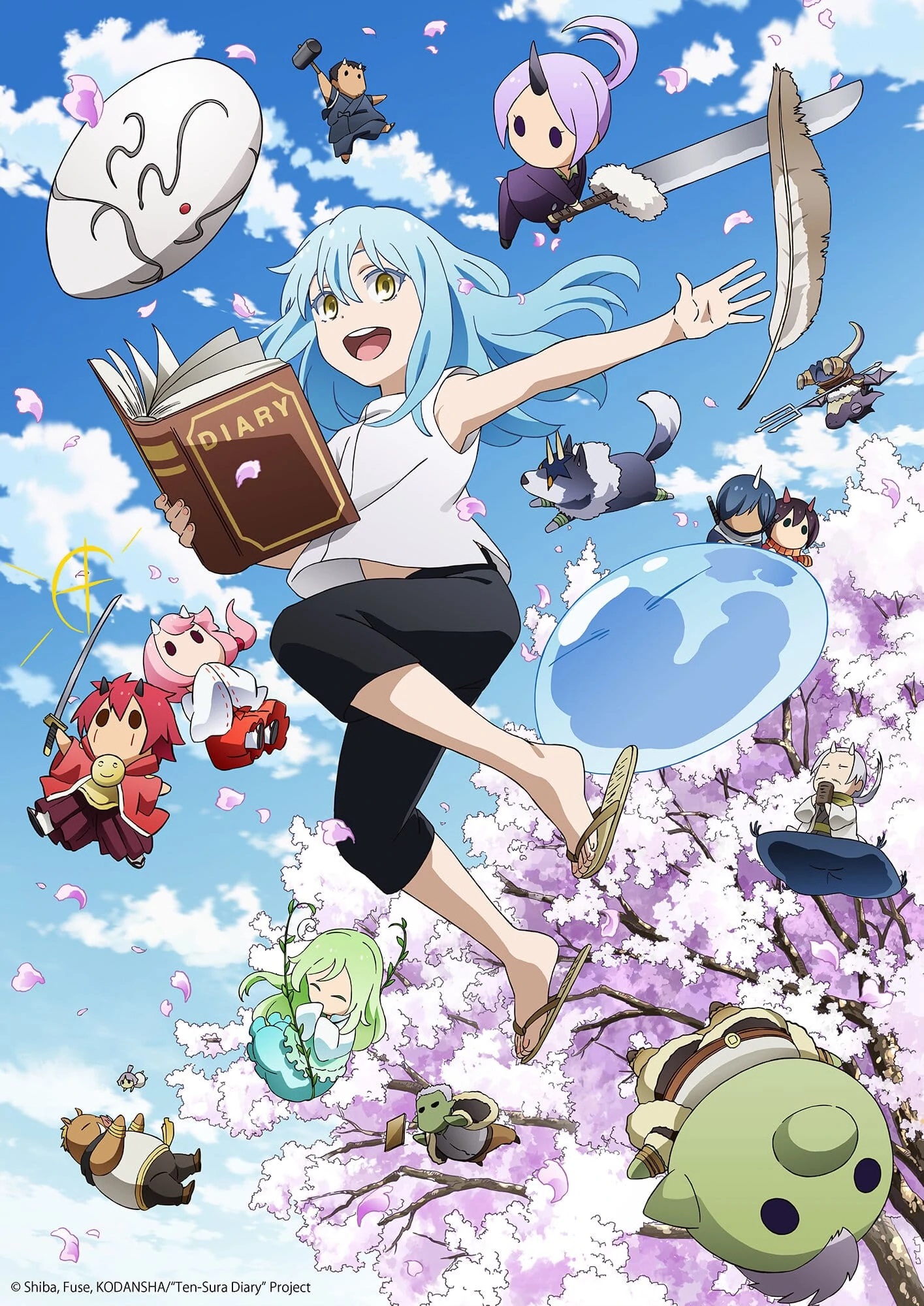 Slime is one of those series I always mention as having improved greatly from the start to be one of the premiere light novel adaptions. Well this spinoff is more like a return to the old days. It’s more of a slice of life adventure about the cast hanging around the village and having fun which can absolutely be a fun angle to have on this. The only issue is that when the series isn’t focused on the action it always gets real tempted to just focus on fanservice instead and….well this one falls into that trap as well. The fanservice is pretty much a constant in every episode and so this one was a bit doomed from the start. It can still be a lot of fun but it’s certainly not a title you would recommend to someone to enhance their view on the main show.

As the title would suggest this series is about adventures that Rimuru has written down in his diary. During the rare times when the heroes aren’t defending themselves from another kingdom or fighting off demon lords they get to have a whole lot of parties. The village loves their parties and why not, they’re a great way to build up morale and get everyone excited. Quite a few of these episodes have some kind of a party to the point where it is almost a running gag. As someone who likes making a big deal out of just about any kind of event I can definitely get that.

So the show is completely revolving around how interesting the day to day life of the characters can be without the fights. Because there are no big fights here, this is all about just having fun around the village. Slime’s cast is pretty solid but I would say they got more of the good characters to the cast by season 2. This one doesn’t have Veldora as a main member yet or Diablo but Milim is here a lot and she’s always a real highlight in the show.

The show’s humor is typically fun too. You have Rimuru having to teach the monsters about Christmas and New Year’s which results in some fun scenes. The holidays probably do sound a bit odd to someone that’s never heard of them before but simplifying things to just say that it’s a big party works for the cast. Milim is also a lot of fun because she can end the whole kingdom with a punch and is thousands of years old but she still acts like a kid the whole time so Rimuru has to be careful how he talks to her about anything really. If she gets the wrong idea or gets upset then it can all be over for them.

Now as mentioned the fanservice is the main issue here. It feels like quite a few episodes through in the obligatory hot springs type moment. Shion’s outfit has never been the most practical one but this show certainly makes sure to jump in with the zoom ins from time to time. Every episode will have some iffy fanservice moments like that. I wouldn’t say the scenes are ever super egregious and the light hearted comedic nature of the show ensures that it never gets too serious or anything. It’s just the sheer frequency with which they happen that really bogs this one down. It’s always the low hanging fruit, the easy way to try and generate clicks but the show should have more confidence in its own humor and characters to not have to rely on this. Instead of being another advantage it just works against the show. 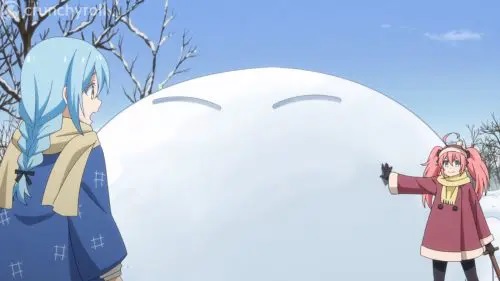 It’s also been a while, maybe ever since I saw a show that had both Christmas and New Year’s in a single season. So that was nice to see. As a slice of life I wouldn’t say that the show is able to keep up with the bigger titles like Kanon or Clannad though. Maybe in part it’s because the characters are more suited for action and aren’t built for comedy or maybe it’s just that the setting doesn’t work as much. I’ve thought about this and a lot of times the best slice of life casts and circumstances are in worlds that are more like real life. Of course you could make the case that it just makes sense statistically because a lot of them take place there. It’s hard to make such a sweeping generalization there either.

So at the end of the day it just comes down to writing and character dynamics. There are a lot of fun dynamics within the cast and Rimuru is a good main character so that makes for a lot of good humor. I do think the show would have absolutely have been able to hold its own well enough if it focused on the humor entirely. Probably not an award winning show or anything but it had enough pieces there.

The animation is decent. I wouldn’t say that it’s great or anything but it’s good enough and you can always tell what is going on. I wouldn’t say they’re trying to make this an S tier title with animation and you can certainly tell that but it’s still good. Part of the show is about seeing the seasons in the village and you can clearly see the differences the whole time so the animation succeeds there. The soundtrack is much more on the forgettable side though. There aren’t any big emotional or action tunes to really focus in on.

In a way there also isn’t a whole lot to talk about in this show compared to most since there isn’t as much of a plot here. So you can expect this show review to be shorter than the last few. As it is when a show is only around 12-13 episodes like this one then it’s always going to go fast. It works in this sense though because then the show doesn’t drag on. I also think they would have had a hard time thinking of more ideas after a bit because it’s not like there are any other holidays to grab. If the show went too much further in the timeline then you would be questioning how they are able to have this much time before the next attack. 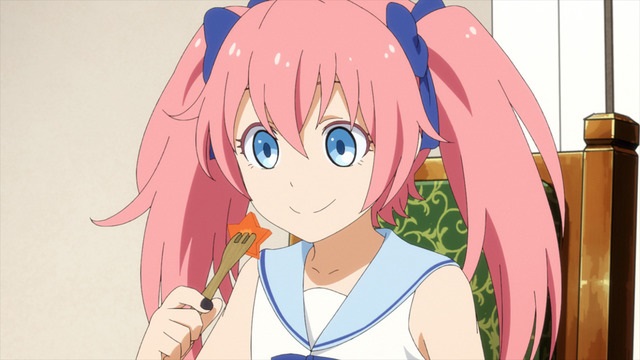 I don’t think the show needs to worry about continuity and being in canon too much to be honest but it’s still something they were probably trying to keep in mind. I do think that a season 2 would benefit from taking place later in continuity because then you can have Veldora as a main character and he could have a lot of fun interactions with Milim. That would be a recipe for greatness right away. As it is Milim does a lot of the heavy lifting here already. Throw in the fun Veldora and then things will get even better. After all he’s one of the only characters who can hold his own against her in power so they’re able to have even conversations.

Plus he’s another immortal who acts rather young but I feel like he’d end up being a bit of a father figure to her. Shion and Milim have a bit of a rivalry going but it’s so one sided in terms of power level that it just doesn’t work nearly as well. It does help to show that Milim is still fairly nice on the inside. No matter how heated things get it’s not like she blows Shion up or anything which would be easy to do even accidentally with how powerful Milim is. It was nostalgic seeing the old Rimuru though. He gets teased for looking like a girl quite a bit here as a result though and his old design could seem like that at times so it’s not super surprising. I feel like this pretty much stopped once he got the cool black leather jacket so in a season 2 if it takes place late enough then Rimuru can probably look forward to the teasing ending.

Plus later on he ends up being strong enough where he is finally in Milim’s league so he doesn’t have to be quite as nervous either. I mean Rimuru is a bit nervous just due to his personality so he’ll still be panicking a whole lot but it’s a different kind of panic. The village idolizes him so much that you’d think it would have improved his confidence more though. I get that it can be a bit weird to have everyone making statues of you and everything but Rimuru needs to either embrace it or find a way to stop it. By meekly accepting it, that just means that nothing will be changing anytime soon.

It doesn’t go to his head though so at least I don’t really see the harm. It’s something for the village to unite around and it gives them hope. Rimuru directly saved most of their lives from futures that would have been way more dire after all so this is still an upgrade. The average townsfolk is living a near perfect life in the village protected by powerful fighters all around. Who wouldn’t want to live there? None of them take this for granted. 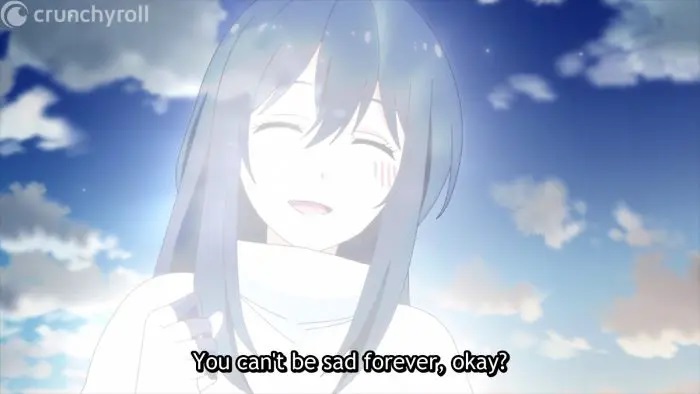 Overall, Slime Diaries is a reasonable show to pass the time by. The fanservice is what keeps me from giving this one a positive score and being able to recommend it though. It would be interesting to see this get a season 2 though and if they can build on the good aspects of the show to make it better. Imagine a jump in quality similar to the main Slime seasons 1 and 2? That would be great and also a fun coincidence. I also think there is an audience for this kind of a show as just a very calm slice of life title. You can watch it as something peaceful in the background or something to watch before bed. A show filled with good feels can be fun so I’ll be rooting for the series to surpass its limits.