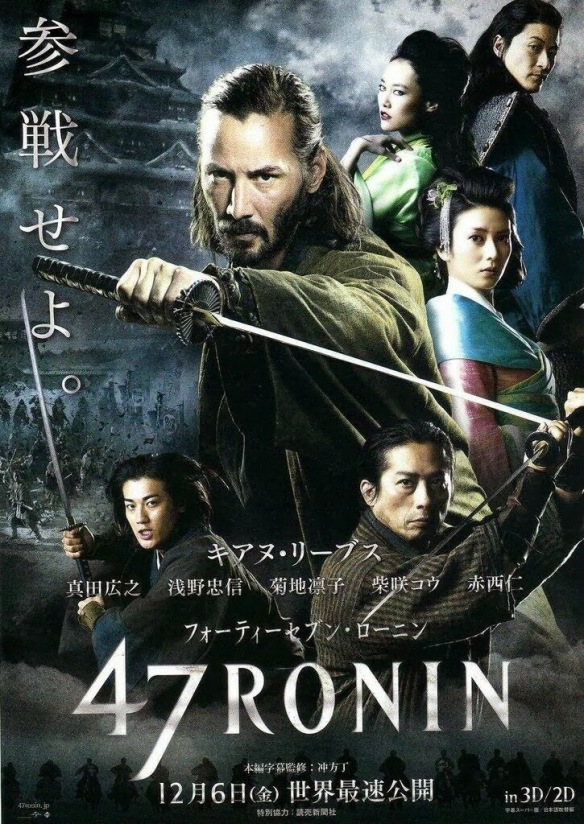 I remember seeing the trailer for this film in the theaters a while ago. The trailer had a lot of action, but on the other hand..it was mythical action set in the olden times of the Hobbit. If you’ve read my reviews of that film series, you know that this isn’t a positive thing. The film confirmed my fears as I watched it and it’s time to see why the 47 Ronin could not even score a 4.

The film’s plot is pretty basic. Kai is a “half breed” and nobody likes him. Unearthly creatures raised him, but Kai fled because he didn’t want to be a villain. He decided to work for a Samurai group in Japan, but they treated him as a slave. Undeterred, he warns one of the samurai that a witch has infiltrated their ranks. The samurai fumbles for a quick excuse so that he won’t have to face her and he says that Kai just has a crush. Their master is put under a spell and tricked into incriminating himself so that he destroys himself with honor! The main villain is the leader of another tribe, Kira. Kira decides to take the main heroine for himself and the feudal lord of Japan forbids the samurai from doing anything about it. The samurai are quickly beaten and thrown around. Time skip! The samurai decide to come together to save the heroine. Hopefully she’s still okay….it’s only been a year right? They head out and get ready to win it big or go home in pieces.

If the plot feels like it was just thrown together…then it’s time to read it again. I’ll admit that it’s not my greatest plot summary, but it’s hard to make it sound interesting. None of the characters were likable and the villains were terrible, but not in a “Look how epicly evil he is” but in a “this guy’s extremely weak and evil, he wouldn’t last a second against Barney with prep time) Let’s get into the various reasons as to why this film did not become enjoyable.

Slow pacing. The film is around 2 hours and the plot doesn’t even start until over an hour has passed. (By plot, I’m referring to the Samurai becoming Ronin and 47 of them going to attack the villains) The first hour is about the heroes getting beaten up and a lot of sad things happening to them. One thing that I’ve never liked is when a film dwells on the sad parts for too long. We get that the character’ life is pretty awful right now…let’s move on. Kai gets beaten up in almost every scene and it gets pretty tiring after a (very short) while. Nothing really happens in the first half and nothing good really happens in the second half.

Classic animal violence is another problem with the film. It’s to be expected which is why I don’t like when films take place in the olden days. We have horses that are injured and slain during the battle with the Chimera. I’m not talking about one or two horses, but a whole lot of them! The Chimera is also animal like in appearance, which definitely does not help matters. Even the final boss is an animal! (Once again, the trailer shows off some of the final scenes of the film…)

Boring fight scenes is a big problem for this film. The Hobbit, Prince Caspian, Lord of the Rings, and Pirates of the Carrabean suffer greatly from this issue. You know that a fight scene is bad when a comedy like The Secret Life of Walter Mitty has one that is many times better. The problem with sword fight scenes in the olden days is that they are typically boring. You need good choreography and preferably a cool sword as opposed to a generic one. These fight scenes just have people stabbing each other and all of the “grittyness” will make you snicker or cringe. If you want a good sword fight, check out Bleach!

Unnecessary grittiness is pretty self explanatory, but it’s still a negative. To trick the head of the Samurai into getting himself into trouble, the witch puts a spell on him and he sees that Mika is in danger. He quickly attacks Kira, but then the illusion wears off and his life is basically over. There were so many other ways that they could have handled this, but they made sure to choose one of the worst ones possible. This kind of scene will never help a film and it will only make it lose more points in my book. That was just awful.

There can’t be any other negatives right? Well, we’ve got a minor one at the ready and that would be the soundtrack. It’s one of the most forgettable soundtracks that I’ve seen in a while and I can’t remember a single theme. That’s pretty sad and while it’s minor compared to the others…it’s definitely not a good thing. How can you enjoy a film without a good music playing in the background?

The cast is also terrible. I don’t like a single living character in the film. They’re all mean or unlikable. Kai is the main character and we’re supposed to feel bad for him since he’s always getting beaten up. His “friends” also beat him up because they don’t want to stand up to the villains. Kai is then forced into slavery and fights death matches for a year. He’s a changed man by the end, but he still refuses to use his super powers…even though they could end the war and help a lot of people. He still doesn’t want too use them for no discernible reason. Using these abilities is not going to turn him evil and a lot of people died because he wouldn’t make the tough call. (The Kai from Cardfight Vanguard would be ashamed!)

Oishi is one of the big “heroes” by the end, but it’s really hard to root for him. He was mean to Kai for the entire beginning and he only acts nice to him once he needs Kai’s help. Oishi also spent a year in solitary confinement, but he’s actually doing pretty well considering. (Unless it was less than a year, but I believe that it said one year) Oishi has his big fight at the end, but…that’s not going to change anyone’s mind. Oishi should have stuck up for himself!

The only character that could be considered cool is the samurai made out of steel. He’s not actually alive as he seems to have been created by the witch. His power is incredible and he feels no pain. He caused an entire squadron to retreat in fear of the very sight of him.

Kira is the main villain and he’s completely unlikable. He’s smug, but he’s not even a great fighter. He can fight, but he is usually hiding behind the witch and his henchmen. He kidnaps people and he doesn’t have any goals that I can get behind. In short…he’s a terrible villain. He’s a generic character that is evil for the purpose of being evil.

Mika is the main heroine and she gets a pretty sore deal in this film. She can’t really fight so the villains take her pretty easily. She is then left to fend for herself for a very long period of time. Her situation is pretty depressing and the ending isn’t great either. She has to hope that the rest of the citizens aren’t corrupted and I would quickly try to move to America if I were her.

Mizuki is one of the big villains and she does most of the work for Kira. She frames the old leader of the samurai and she also beats up a lot of the samurai while she’s in her serpent form. She’s not very powerful in that form, but she’s still a match for the humans. She’s not likable either as she’s just there to help Kira. There’s no reason to root for her and you just want her screen time to end.

Asano was the old boss of the samurai and he wasn’t very likable. He was too old to fight, but he did try his best. He didn’t go down like a man and his untimely demise was not very epic. That’s partially why Asano just didn’t rank in the end. He should have tried harder and he could have been cooler, although he definitely made the right move during the illusion. No one can fault him for that.

Finally, the ending is terrible. It cemented the fact that I wouldn’t like any of these heroes. They took the easy way out by taking a quick exit instead of living for the consequences. A true hero would have fought the odds and tried to stay alive. Better to die on your feet than die on your knees right? The ending is pretty sad and you’ll leave the theater on a sad note. That tells you that the film is doing something majorly wrong. No matter what the genre is, you should leave a film humming or feeling pretty epic about yourself. This film doesn’t accomplish that since I don’t see myself discussing it that much in the future.

Overall, this is a film that I would strongly advise skipping. You won’t be finding a fun samurai experience here and you’ll be better off watching the Rurouni Kenshin series. The film makes about as many errors as it could make and there really aren’t any redeemable features about this movie. The undead samurai was decently cool, but his very limited screen time isn’t worth checking the film out. Not to worry, the new Godzilla film is almost upon us and I recommend preordering your tickets for the big event instead of renting this film from Netflix.