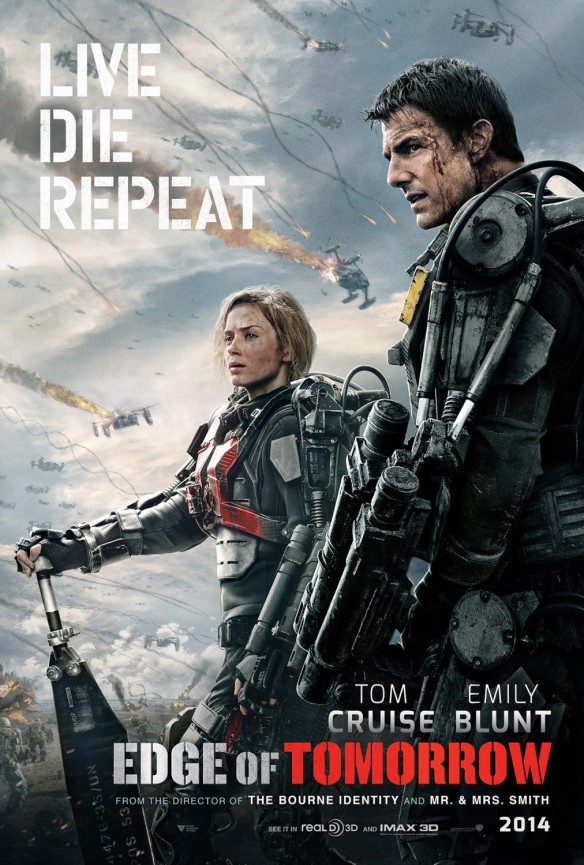 This film is definitely way more recent than some of the others that I’ve reviewed as of late. (With the exception of Assault on Arkham) It’s time for a good ole 2014 film and this one looked pretty good when I saw the trailer in theaters. I’m always up for an alien invasion film and it looked to have the exciting explosions from Battleship while being a few pegs ahead in terms of writing and character development. It was about as good as I expected although it was also a little lighter on the action than I had anticipated as well.

William Cage is the protagonist of this story and he didn’t really want to get involved in the big battle against the alien invaders. He was happy to report on what was happening, but getting on the frontlines was for the soldiers. Unfortunately, he upsets an army general who forces him to go to the frontlines and things can pretty tough for him from there. He dies. Luckily, Mr. Cage managed to take out a Mimic first, which has allowed him to enter the timestream.

To provide some more background on this, the alien leader has a complete mastery over time. It’s why the aliens are crushing the heroes so easily. Whenever one of the alien Mimics is destroyed, it can go back in time to relive the day and to inform the other aliens of what is going to happen. So, by destroying one of them, Mr. Cage now acts as a Mimic and he gets to relive the day whenever he is destroyed. It’s really not a bad deal, but dying all of the time can be pretty sad as well. I have some issues with this part of the plot, but I’ll get to that later. Mr. Cage realizes that his only way out is to end the invasion once and for all so he will have to locate the war hero (Vrataski) in order to vanquish the aliens once and for all.

Okay, let’s talk about the parts of the plot that I find a little hard to believe. One is that nobody has ever destroyed a Mimic at close range before. I find that really hard to believe considering how long the war has been going on. From the start of the film, they act as if the war has been going on for years and years. America didn’t even join in at first, but we hit pretty hard when we did go in. So, there should be other humans that have obtained this ability. By “more” I’d say at least 10-100. The odds of finding a Mimic are apparently 1/1000 or something like that, but that’s not a terrible odd when you’re involved in a war.

Another dicey part is the hiding place of the master alien. Let’s just say that it picked a very iconic and legendary position to set up shop. How could nobody go to this area during the entire war? It’s not very feasible to think that the alien can easily escape and its travel speed is likely very slow. The heroes were definitely slacking off here and the governments should have been on top of this.

William Cage is a pretty good main character. Unfortunately, he still does suffer from the negatives that plague most mainstream leads. No matter how serious the situation is, he quickly thinks of romance and comes up with some terrible reasons to try and jumpstart this. It’s played for laughs of course, but it certainly doesn’t help his case. I do like how he immediately resorted to blackmail though since that felt pretty “American.” No offense intended of course, but he just did what seems natural to many people at his level. Why risk his life for our planet? He eventually learns how to fight though and he does a pretty good job of taking on the enemies. He’s a little slow on the draw at first, but he becomes a pretty capable warrior by the end. The film takes place over a span of around 1 year based on the amount of days that he had to relive. That’s a lot of time and it’s a wonder that he kept it together. Cage is a pretty decent lead, but I guess he’s pretty interchangeable. I’ll take him over James Bond or Jack Sparrow though and that’s already a pretty solid step up. For the most part, he really he is a solid character, but he’ll strike you as just being very generic.

Ms. Vrataski is the hero who has slain many aliens and she is supposed to be virtually unstoppable. There is a plot twist about this that really eliminates most of her reputation though. I suppose that a figure head is always necessary to win the big battles, but she’s only pretty good at fighting. I wouldn’t call her legendary or exceptional. Especially at one point towards the middle of the film where the aliens continue to best her. I have to say that she was pretty underwhelming although you may have already surmised that from this paragraph. She tries really hard to be the next fan favorite character who’s as emotionless as Mikasa or Sai, but it just doesn’t work here. I assume that she has some kind of tragic past, but the film (thankfully) doesn’t explore this and you just wonder why she’s so mean to the main character. I would be too if I was in her position, but then she needs to back it up a little more while on the field. We also can’t forget how she left Cage to die in one of the first scenes. She’s just not hero material.

It’s time to mention another part that I found hard to believe. A lot of those in this film, but keep in mind that it’s an alien invasion film that deals with time travel and both of those genres already tend to have this “weaknesses”. Mr. Cage knows way more than he should. I don’t see how he would ever learn about someone’s true name through their origin. Most of the other pieces of intel that he acquires off screen are pretty believable, but at the same time it is still hard to picture for others. Even knowing so much about the Secretary was a little dicey at this point. Reliving a day an infinite amount of times is great, but there’s still so much that you can do in a day. Would someone really trust you with their ultimate secret after a single day? I don’t think so.

Aside from that, the film does a good job of avoiding the mainstream film holes. No animal violence, and the slight bits with romance are purely through dialogue and nothing is shown. That’s always a good thing and the action is pretty fun without being over the top in a negative way like we’ve been seeing recently with blockbusters.

The fight scenes aren’t a huge focus of the film, but they were very well done. The aliens are actually some of the fastest creatures that we’ve seen in this kind of a film. I’d actually take one of these against a Xenomorph, Predator, Chitauri, or a number of others. They don’t typically use projectiles, but they’re incredibly fast. If anyone’s seen Attack on Titan, they use a similar spin move to Levi’s. If you haven’t seen it, just picture a top once you spin it. Then imagine that the aliens can keep up this speed as they slice and dice throughout the war. I really liked these guys! The aliens are strategic and very deadly. It’s hard to imagine the army winning a single battle, but the film actually does provide us with an acceptable answer to that question.

Overall, Edge of Tomorrow is a pretty good alien invasion film. I would have liked to have seen the actual battle against the aliens some more or maybe our government leaders and how they plan out their next strikes. I think Cage’s plot was actually less interesting than those would have been, but it’s still good for what it was. We learned that you never trifle with the government as seen in one of the early scenes. I do applaud Mr. Cage for attempting to run though since at least he didn’t go down without a fight. I recommend Edge of Tomorrow as a solid alien invasion film, but don’t go in expecting this to be as thought proboking as other titles in its two genres.It’s a fun summer blockbuster and that’s good enough for me.