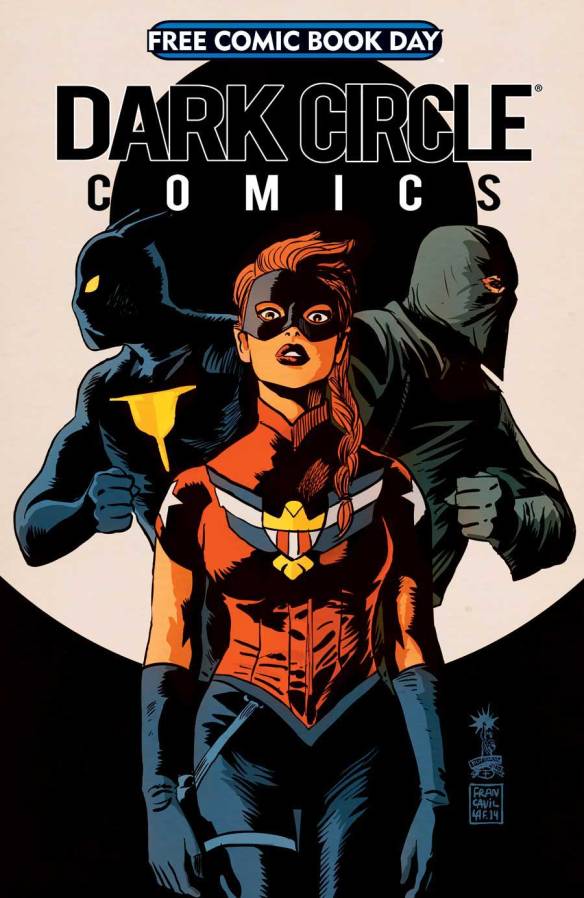 All right, let’s continue on with the Free Comic Book Day reviews. This comic theoretically brings three different stories, but something must have happened behind the scenes as the third one is not included. It’s a little odd as the table of contents acts like it is there and even the intro page towards the end of the collection. Unfortunately, the comic that is gone is the one that looked like it would have been the most interesting. Ah well, perhaps next time.

The first comic is about a cop who gets shot as he takes down some thugs who were over by a local school. It’s certainly the most violent comic of the bunch although it’s not too over the top. The cop’s face is now disfigured and he must learn to adapt to his new situation. Given the situation over in Baltimore, I don’t see things ending well for this series. It’s just a matter of being in the right place at the wrong time. Anything mainly dealing with cops and especially with schools as well will likely be controversial.

The art is decent although it has that gravelly look to it. It’s hard to describe, but gritty comics typically have it. So, even in a happy scene, there’s always the nagging feeling that something could happen at any time. This wasn’t my kind of story and I wouldn’t be getting the trade, but that’s why they make double packs right? The second story was better so we’re in a similar situation to the Teen Titans Go combo.

The second story deals with a guy who retired from being a superhero. It just wasn’t for him and he can now move on. Unfortunately, mysterious things start to happen and he is forced to don the costume once more. We don’t get a real feeling for what the plot’s going to be, but I’d expect it to be your average old aged hero comeback story. He’ll have some doubts, but he’ll ultimately save the day.

Again, there’s that feeling that things may not end well here, but it’s a decently interesting story. It’s definitely the highlight of the group and the costume is fairly neat. The hero looks like a mix of Batman and the Wildcat. Hopefully we will get some references to those guys at some point and it will be good to see who the villain is here. The hero has already been kidnapped so he’s off to a rocky start. The art is a little more mainstream than the first comic and it certainly makes the story easier to read. We’re not at Marvel or DC level yet, but we’re getting there.

Overall, This comic couldn’t quite hold up to the others, but the collection was missing an issue so maybe that would have been able to help it. The cop story wasn’t very good, but the hero one has potential. The main character seems to be likable so far and his son is a reasonable supporting character. As long as the comic plays its cards right, we could have a winner here. That being said, the main character needs to get free quickly or the son will likely figure out the dad’s secret identity. That would certainly throw a wrench in his plans.