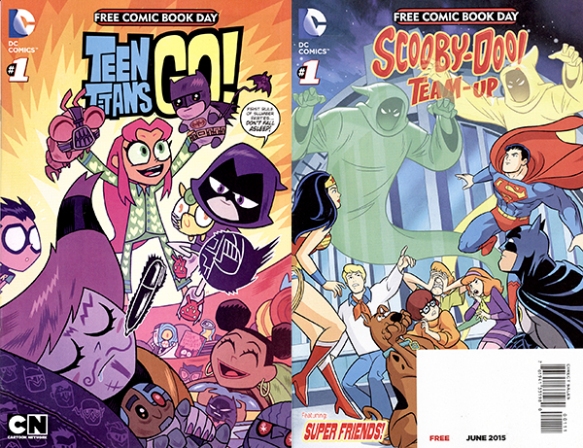 It’s time for DC’s counter to the Marvel comic! This is a double comic as the title suggests and those can always be interesting, but they also mean that each story will be a little on the short side. In this case, I wish that the Scooby Doo comic could have gotten more pages as it was infinitely better than the Teen Titans adventure. Ah well, it can’t be perfect right?

In the Teen Titans comic, the girls decide to have a slumber party. Naturally, no guys are allowed so Beast Boy and Cyborg decide to have some fun bowling. Robin disappears…to do some spying. His role is pretty bad here and it is sad that he would go to such lengths to spy on Starfire. His help is almost valuable against Trigon, but not quite. In the end, we realize that even Trigon can’t infiltrate a slumber party and get away with it!

The art was decent I suppose as it looks like the TV show. Teen Titans GO is a cartoon that really varies from episode to episode. Some episodes can be genuinely good while the majority of them range from decent to downright terrible. This would be one of the weaker episodes if it was animated. There are no scenes that will get you to laugh and seeing as how this is a comedy…that’s a bit of a bad thing. The sideplot involving bowling was better than the main one for me and that’s considering that the food distractions weren’t up to snuff. Cyborg should have led off with pizza and donuts!

The Scooby Doo team up is worlds better than the Titans story. The Mystery Gang are enlisted by the Super Friends to vanquish the ghosts that have taken over the headquarters. They would do it themselves, but even Superman was no match for these guys. The Man of Steel was disintegrated by a single ray blast. Impersonating former Super Friend members, (From the big Showcase book that I read, which was neat since I apparently read that collection in the nick of time!) the mystery gang must stop the ghosts at any cost!

The body count continued to rise in that story and the whole group of Super Friends was taken down. The ending is both startling and unsurprising. It’s still a superb ending and you can bet dollars to donuts that I am interested in finding out how the story ends. Scooby Doo Team Up looks like it has the makings of an incredible comic series and I hope that it goes on for a long while. This story was just about perfect and it was both interesting and funny. The Mystery Gang were all in character and they have always been enjoyable individuals to have in an adventure. Since I also like all of the Super Friends, it makes sense that this comic would be an all star.

The art was very good as well as the issue looked like a retro Super Friends adventure. It’s not quite as high budget as those comics, but it looks fairly authentic. You’re definitely missing out if you don’t read this half of the comic so don’t let Teen Titans GO stop you. This story is worth it even if it is just to see Superman get taken down by a ghost. Who would have ever thought that Scooby Doo and friends would save Earth’s mightiest heroes?

Overall, This was a collection that was hampered by the first story. The Scooby Doo one could have gotten an easy 8, but it will have to sacrifice 2 stars to hang onto Teen Titans. Teen Titans wasn’t terrible so you shouldn’t get that impression, but it just wasn’t that good. I probably would have given it a 5 on its own. I’m still glad that I’m watching Teen Titans Go as it has certainly had its moments, but the comic would likely work better if I was reading a whole collection. That way there’s more of a chance that there would be good stories along with the bad ones. Just grabbing a random story is like gambling. You don’t always come out on top.