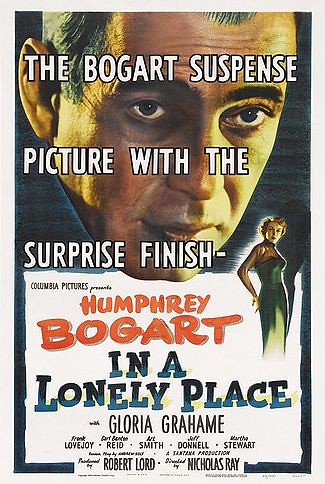 It’s time for another sad “classic” that doesn’t end up aging well at all. The film definitely leaves you in a lonely place and you have to wonder if the film’s solid reputation is only fleeting at best. The characters once again aren’t all that likable and the film ends up dragging on for quite a while. Well, I suppose that the title is fitting, but that’s the only compliment that I can ultimately give the film. It fails at everything else.

Dixon is a guy who has a very bad reputation of losing his temper and starting trouble. His movie scripts have also not done very well in a while since he tends to have writer’s block and refuses to make any more remakes. One day, a girl he invited home to read a manuscript is murdered on the way home. He is placed under suspicion due to how uncaring he is and the suspicious circumstances surrounding her murder. Meanwhile, Dixon’s neighbor, Laurel is brought in and the two very suddenly get attracted to each other. Unfortunately, Laurel may have picked the wrong man as Dixon seems to get further and further gone with each passing day.

Let’s start off with the fact that none of the characters here are likable. Dixon is obsessed with murder to the point where he doesn’t mind cracking a few jokes upon learning that the girl was murdered. He doesn’t really care even though it’s indirectly his fault for inviting her to his home. I say indirectly because you can’t totally blame him there and she seemed to be in a relationship with a pretty crooked fellow. This result may have happened either way. You’re supposed to sympathize with Dixon, but he’s too far gone. He makes no real attempt to control his anger and nearly murders a guy for simply shooting off an insult. The fact is, he would have murdered the guy had Laurel not stopped him. He injures his manager as well and then tries to strangle Laurel until the phone stops him. That’s two murders that he would have committed had he not been stopped.

As I said, Dixon is way too far gone to be even remotely likable. There’s no way a positive relationship could have ever occurred if he doesn’t respect Laurel enough not to force her into things. Even the marriage proposal is only accepted because of the very implied threat had Laurel not accepted. Laurel isn’t great either. Refusing in the beginning would have been the safest choice, but why did she get involved in the first place? She went from being a rather cold individual who claimed not to rush into things only to get serious about the relationship the very next day. It was a very fast turnaround and the romance really made no sense from the get go.

Now, we’ve also got the cop who seems to be a friend of Dixon’s although just barely. He invites Dixon over for the guy to help explain the murder. Dixon is fascinated with murders and writes about them a lot so he’s sure to be an expert. Sure enough, Dixon figures it out and has the cop use the murder method on his wife as part of a demonstration. All right, there’s nothing bad about that as it’s all pretend right? Wrong, the cop gets so much into it that he starts to seriously squeeze until his wife lets him know that it’s hurting. Even then it takes the cop a few moments to notice before he stopped. Once again, we’ve entered crazy town. You’re not seriously tell me to consider the fact that the murder is so interesting that you would start to seriously use the method on your wife for even an instance right? I mean, the wall between fake and real is quite large and anyone with a speck of common sense would not apply the squeeze at all past safety limits. The cop was doomed from there.

Dixon’s manager wasn’t bad even if he probably shouldn’t have put up with this abuse for so long. He’s just being a good friend so I don’t hold that against him. He’s probably the best character by default although he really shouldn’t encourage Laurel so much since it’s all right to put yourself in a dangerous position, but never anyone else. That’s where you’ve got to draw the line.

As a result, the film is just not enjoyable in the slightest. That’s what happens when a film has a bad plot or commits any of the big 3 errors. (excessive violence, fanservice, animal violence) There are two kinds of bad films by the way. Ones that are simply hard to watch like this one and those that you can enjoy watching in the moment while recognizing their flaws and placing it as a bad movie. I’ll give you all an example of this.

Pixels also got a 1 like this movie. The big difference is that the film was still a lot of fun. I had to stifle a laugh many times, there were great action scenes, and the characters could be likable. Why was it terrible? Well, there were a lot of inappropriate jokes and terrible writing. That may not sound like enough to give the film a 1, but trust me…it was. When the writing is overloaded with those kind of jokes you can bet that I’ll give the film a terrible review. It’s a shame because the film could have been good with so many solid moments, but that’s how it goes. Regardless, I’ll take that kind of film any day over one like this. Pitch Perfect, Bring It On, Tower Heist (to a lesser extent), etc are examples of films like this. I don’t like them and I certainly don’t plan on watching them again, but if I had to choose between them or films like this one, (Sucker Punch, In A Lonely Place, Haunting in Connecticut, Amityville Horror, etc) I would definitely go with the former.

That’s because films are made for you to have fun. I still say that is the purpose of all forms of media. If you’re not even having any fun in the movie and it’s just dragging on and on with content that is not enjoyable, then it has failed. For films that are not enjoyable intentionally, then it is a failed film right from the start. Criterion seems to like approving films like this, which is definitely regrettable. They’ve had some good films in the past, but it seems to be rare.

Overall, I definitely do not recommend In A Lonely Place. It’s not a fun film and it’s probably the first Bogart title that I really did not like. It’s a shame since he typically plays likable characters. This may have come out before Godzilla, but the writing is surprisingly not engaging mainly due to the plot. Instead of checking this film out, look up some classic Hitchcock titles that will engross you in their plots or look for Superman and the Mole Men. A true classic that can appeal to all film fans with its good humor and solid climax.