This review is of the edited TV-14 version of the film and all thoughts below should be addressed as such. A review of the unedited version would be more negative and may have a different score 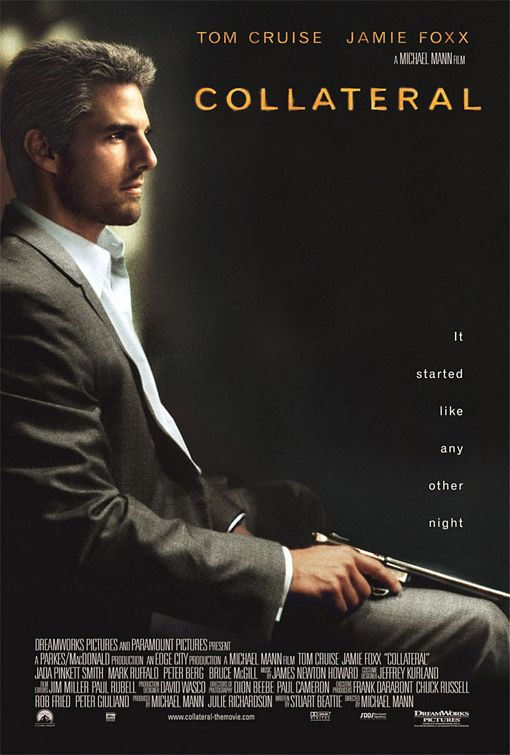 It’s time for an action film where Tom Cruise is actually the main villain. It’s definitely an interesting switch to see him play the antagonist and it is handled very well. Typically, you’d expect the film to purposefully make the character as evil as possible to show us that the actor can handle different roles, but Collateral allows Cruise to still play himself…he’s just on the side of evil this time. Collateral certainly destroyed my expectations and proved itself to be a great film. I dare say that it may just make my top 5 non franchise films when it comes to live action. It would lose to The One, but that’s pretty much all that comes to mind and it’s been a while since I saw that film so…who knows.

Max is a cab driver who one day wants to open his own business. Working as a cabbie is just something that he is doing to earn some money first. Unfortunately, his plans are thrown for a loop when he ends up carrying a dangerous assassin by the name of Vincent. After being tricked into driving Vincent to his first target, Max quickly realizes that there is no easy way out of the situation. If he tries to leave, he’ll die along with his mother and anyone else that he knows. His only chance is to take Vincent out, but Vincent seems to be a complete pro at anything relating to violence. Can Max make a move before Vincent targets someone that he knows?

From the start of the film it is shown that Max is a nice guy. He’s the kind of cab driver who will have fun holding a discussion with the passenger and ensure that he gets you to your destination as soon as possible even if that isn’t economically preferable to him. Max helps a prosecutor out with some advice and also visits his sick mother regularly. He’s not used to violence and panics quite a bit once Vincent shows up. The situation is handled fairly realistically as well as there isn’t a whole lot that Max can do to escape. His best bet would have been running as soon as they hit the second target. Max halfheartedly tried, but that was it for him. Vincent took more extreme measures to ensure that the driver wouldn’t get away. Max stepped up when it counted though and the whole time he did his best to put a dent in Vincent’s plans. The film did a good job of not making it cheesy when Max started to actually resist more and more.

Vincent’s easily the standout character here though. He has the confident personality that most of Cruise’s characters possess. Vincent is great in a hand to hand fight and a crackshot with his gun. He takes out normal joes and professional gangsters alike. One of his best scenes is when he walks into a night show and takes out multiple gangsters, cops, and random joes. Vincent is just very good at his job to the point where he is typically very relaxed. He makes jokes and quips and even tries to give Max some life advice. The film still makes you wonder how serious he is about this though. On one hand, it is hinted that Vincent was always going to destroy Max once he finished off his targets as a similar case happened in the past. On the other hand, he does say that he will let Max go and acts like your average protagonist at times. Personally, I believe the former. I think it’s all just a big act and he’s a lot more cruel than he lets on. Vincent is just really good at keeping the mask on at all times. After all, who says that a villain can’t have a sense of humor and a positive disposition? If anything, it helps Vincent blend into the crowd more.

Annie is the prosecutor that Max helps out at the very beginning of the film. Naturally, the film wouldn’t have had her appear if she wasn’t going to return right? Initially, I was expecting a very different film. I thought she had appeared because Vincent was going to escape or die and then Max would be framed for serial murder. Annie would then help him out in court. Instead, the film goes in a very different direction and one that is just as effective. The writers also did a great job in avoiding the cliched romance between her and Max. Instead, they acted as competent partners in the end. If I had a minor gripe, it’s that the incident shook Annie up a little too much. Of course, who knows how I would act in a similar situation. It’s an extremely minor nitpick and Annie’s still a good character. Ironically if Max had followed her lead, the heroes would have made it out of the climax a lot sooner.

Ray is a police officer who talks a good game and acts like he is going to be a major player in the film. The writers certainly had a lot of fun with him and the way that his plot plays out is perfect. Seriously, Collateral had a fun time destroying the usual cliches and giving out red herrings. Ray’s definitely a likable guy and his role was direct and to the point. There were a few other cop characters who showed up, but they were mostly just bit roles to give Vincent someone to shoot. Ray was the only one who really felt like a full fledged character.

The film had a good amount of night scenes. The camera settings were definitely solid though as it was never hard to see what was happening. The only scenes that were fairly dark were typically for suspense reasons. For example, Vincent looked as if he was Wesker from Resident Evil at times with his dark shades and mysterious attire. I’d say that he probably draws quite a lot of attention that way, but maybe it’s one of those “So obvious, nobody would ever suspect” kind of things. I can roll with that.

I don’t really remember the film having much of a soundtrack. Whatever tunes were there fit well with the scenes though as I definitely don’t remember any moments where I would need to shake my head. The violence in the film never gets too gruesome. People are shot and they die, but it never goes out of its way to be all that graphic. It may be thanks to the TV version, but regardless, I’ll chalk that up as a positive here. Restraint is always a good thing for an action thriller.

Collateral moves at a great pace and is anything but dull. As I mentioned earlier, it’s easily one of the best thrillers. You can feel the tension whenever Vincent is around and especially after he subtly threatens Max’s mom. That’s when things get a little more serious for Max. The film’s action scenes are great, which almost goes without saying. The gun fights are handled well and it makes you wish we could have a Bourne vs Vincent match someday. I think Vincent would actually have the edge in a gun fight although Bourne could win a fist fight.

Overall, Collateral is a great movie. There is almost nothing negative to say about it. The characters are all likable for a change and the fight scenes are great. If you’re looking for a good action film, then this is definitely the one for you. I don’t know why it isn’t more popular, but maybe it’ll eventually be known as an obscure classic. The ending has some mild plot hax, but don’t most thrillers? You can also make the case that someone’s heart wasn’t in it by the end. The film gives you a lot to think about so it’s fun to come up with your own deductions.