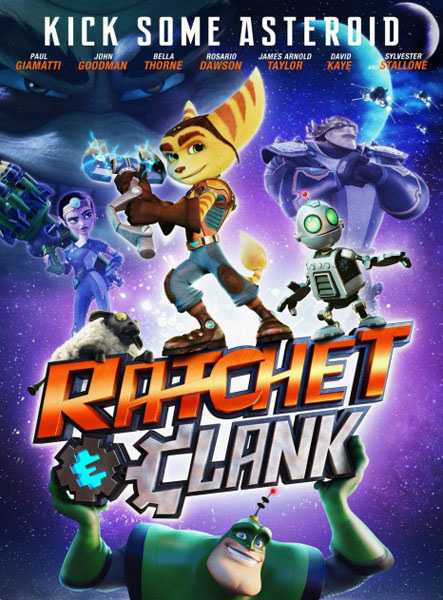 It’s time to finally check out the recent Ratchet and Clank film that came out. I’ve played most of the games and it is definitely a fun franchise. Jak’s the most epic and Sly typically has the best banter, but the Ratchet series has always had the best overall package. The gameplay is always very crisp and the colorful cast of characters makes each game a lot of fun. This film didn’t do the greatest job of adapting the game and I can see why people would have a lot of issues with it, but it’s still a fun film overall. A faithful adaption of the first game would have been even better, but if you didn’t know the source material and just walked up to this one, I think you’d be reasonably satisfied with the end product.

Ratchet is a mechanic on a sandy planet who has grown bored of the routine. Being a Skywalker would be a lot more fun so Ratchet decides to head to the Galactic Ranger tryouts to see if he has what it takes. The Rangers are adding a new member for the first time in a very long while because they need to beef up their defenses to take on a new threat. Planets are being destroyed across the universe and the culprit must be brought to justice. Unfortunately, Ratchet fails the exam and heads back home. Suddenly, a robot appears with a grave warning for the rangers and Ratchet uses this opportunity to live out his dream. Will Ratchet and his new robotic sidekick Clank be able to stop the villains or will this team up be short lived?

You can definitely see quite a few similarities to the Star Wars beginning in the film. I didn’t really notice the similarities in the game, but granted, the film expanded on a lot of the intro. The film also added a few Easter Eggs like Sly Cooper and Daxter as Clank tried to find out what species Ratchet was a part of. The beginning of the film is probably the best part. The cool music that played when Ratchet first appeared helped to set the mood and the first fire fight between the Galactic Rangers and the enemy robots was neat. The villains were actually pretty tough and I wouldn’t have minded seeing more Star Wars esque battles like that. Don’t get me wrong, seeing the Mini Zorgs running after everyone is almost hype and all…but I prefer my full on battles.

Granted, Ratchet and Clank isn’t a super serious action movie. The games aren’t like that either, although things did get a little more serious during the time trilogy. The games have always walked a very fine line between total comedy and light hearted action adventure. I’d say that the film definitely went more towards the former and probably overdid it just a bit. Some of the comedy was a bit much and just on the generic side. Qwark is rather extreme, but that’s in character so I can roll with it and he does a better job than most of the others.

The graphics are pretty good. I’m not sure if I’m prepared to say that it looks better than some of the latest games because I was actually more impressed with those, but it certainly looks sharp. It’s pretty surreal to see the series getting a big theatrical film like this. As mentioned earlier, the soundtrack is pretty sharp. At the very least, the film didn’t hold back on the technical aspects. I think better writing would have gone a long way, but it’s not bad either. I just think that it wasn’t up to par with the main games. Perhaps the film was trying to appeal to the general audience a bit.

The characters are solid and that’s not just nostalgia talking. Ratchet’s a very relatable hero who wants to do something great with his life. He has a lot of skills, but things just don’t always work out the way he hoped they would. His careless nature is maybe a little extreme in the film, but he’s a hero at heart and always makes the right call. Clank’s a good sidekick as well. The film didn’t use his iconic laugh as much as it should have, but he still got to shine. Case in point is one of his earlier moments where Ratchet tries to say that Clank was taking him out of context so Clank had to whip out his recorder. Ratchet’s comeback would have worked on just about anyone, but Clank was prepared for it. It was a good move and it shows that you can never be too prepared. They make for a good combo and I do prefer Clank to his rivals Daxter and Bentley.

Captain Qwark is a fun character as always. Betraying everyone was a rather serious crime though and he did get a whole planet destroyed as a result. It’s a little hard to simply walk back from that although people didn’t seem to care too much and he already wrote a book about it. It may be a little hard to buy at times. One aspect that I think the show got wrong is how people started to ignore Qwark in favor of Ratchet. Part of the point to Qwark is that he’s like Hercule from DBZ. The main characters know that he is a phony, but nobody else does. The film didn’t really get that vibe across. Maybe they figured that the plot would not be able to work otherwise, but it is quite the change.

I didn’t really care for Drek as the main villain. Ratchet & Clank’s one weakness has typically been the villains. You can’t really take any of them seriously. Drek is worse than the usual villain though because at least some of the others can fight. Drek can only give out orders or jump in a mech suit if he is feeling lucky that day. I liked Victor though. His design was actually pretty good and his energy sword made for quite the weapon. He’s easily the most intimidating presence in the film even if it is never really explained how he was immune to the magnet. He’s made of the same stuff as the others right? Hmmmm. Doctor Nefarious is around, but he’s a lackey for most of the film. I’m not sure if he started out this way in the games too, but I look forward to seeing him in a leadership role instead. It’s just odd seeing him like this.

The other Galactic Rangers are fairly generic and I look forward to seeing them get written out of future films. Seriously, there’s no point to these guys and they just steal screen time from the real characters. They are really cardboard cutouts who just live up to their character tropes and no more than that. While that may sound harsh, I don’t really dislike them all that much, I just don’t think they really needed to be present. Qwark is the only superhero that you really need and the plot could have just been altered to have had Qwark bring along a sidekick instead of a 5th member. Problem solved!

For all the film’s faults, it still manages to achieve the general goal that every film has. It’s a fun film. You’ll never be bored during Ratchet & Clank and it’s a film that’s easy to watch no matter what time of the year it is. Christmas, Thanksgiving, President’s Day,….Halloween, this film will still be fun. It’s not all that long either at only around an hour and a half so it’s easy to fit into just about any slot. It may not be a masterpiece, but the film has heart and I’d be content to see the creative staff behind this one tackle some more franchises someday. It’d be great if they could play up the action angle a little more considering how high tech everything is in this universe, but I’ll take what I can get here. As long as the film never goes downhill and starts really overdoing it with the comedy, then I’m on board.

Overall, Ratchet & Clank may not have been as great as it could have been, but it’s still a good film. It’s a shame that we may not end up getting a sequel at this rate. It’s nostalgic to see the characters again since it has been a while since I played one of the games. Turning more video games into movies is definitely a good idea and I want to see Sonic and Mario get that treatment at some point. Honestly, just about any Nintendo game could make for a good movie and I’d also like some RPG movies like how Final Fantasy XV got one recently. The more the merrier I say. Whether you’ve played the games or not, I recommend checking out this film. It’s a fun little adventure film that I could recommend to anyone and there’s not even a cliffhanger so if that’s not your thing then you don’t need to worry. I do have to say that the one sad part of the ending is how Ratchet’s boss isn’t very sympathetic. It’s hard to feel bad for him when he doesn’t give Ratchet a day off for saving the universe. I think Ratchet had a point when he said that he thought the boss would be a little more touched at the gesture of Ratchet coming home instead of becoming a billionaire on another planet or something. I guess that’s the boss though, he does what he wants when he wants.