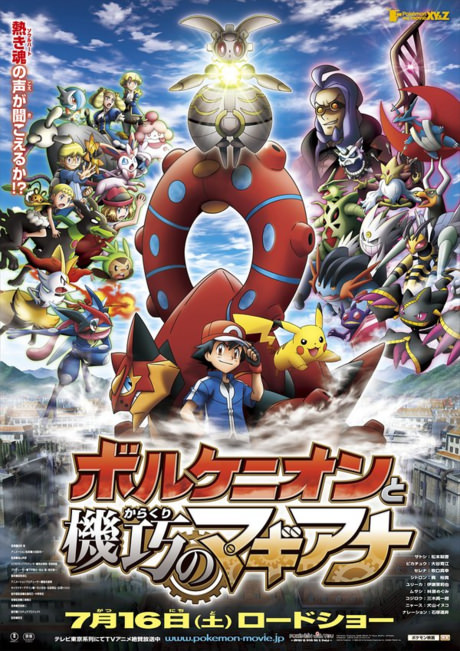 It’s always a good feeling to have a new Pokemon film around. I was definitely ready for this one and while I wasn’t very hyped walking into it (The trailer wasn’t all that exciting) I still knew that it would be a good film since it’s Pokemon. As expected, this is a pretty solid film. It may not be one of the highest Pokemon titles for me as it’s around Hoopa level, but it has good action scenes and Pikachu gets his props. I don’t ask for much more than that.

Volcanion is a Pokemon who protects others from the villainous humans who roam the world. In particular, he is currently protecting Magearna, a robot who is also classified as a Pokemon, but very unconvincingly. Unfortunately, this robot is wanted by Alva and his cronies so that they can take away her life gem and make the world a darker place. Ash and friends are caught right in the middle of this when a mystical stone binds Ash and Volcanion together. They may not get along all that well, but they’re going to have to make do now because neither one of them will be getting away. Can these two strong willed individuals get along or is it curtains for the heroes?

Before talking about the new characters, it’s important to point out that the film gets all of the main characters right. Ash and Pikachu get the respect they deserve and it’s why so many people liked the X and Y series. This was one of Ash’s toughest rosters to date and he had the most experience that he had ever had except for possibly Johto. It’s a close fight with those 2. Well, this film acknowledges that as Ash is able to defend himself from multiple Mega Evolved Pokemon at once with Pikachu, Greninja, and his other fighters. Since the little green mascot is around, this seems to take place well into the X/Y series so it makes sense that Ash would be ready to deal with just about anything. Pikachu also looks really good and even picks a fight with Volcanion. Ash puts an end to that since pointless fighting isn’t his style, but Pikachu would have won that fight. I was very satisfied with how they looked and it’s probably one of their best movie portrayals in a while although Pikachu has been consistently looking strong lately. (Ignore Sun and Moon)

Likewise, Serena and the others were still around. I can’t really say that they did all that much to be honest. They were ready to fight as well so I’ll give them some props there. There was nothing wrong with them, but they were mostly here as spectators this time. Bonnie is definitely still my least favorite member of the group and she’s too young for the journey. Clemont is certainly not very charismatic either, but I do like that he has the same voice actor as Yuuya. It makes him a little more bearable. I have yet to see Serena fight, but she’s always seemed like she has a lot of personality so she’s probably the best from the group.

All right, lets look at Volcanion, the Pokemon that this film is named after. I’m afraid that I did not like him. He is Hoopa levels of bad and we’ve seen this kind of character way too often. I liked Mini Hoopa so that helped the former a bit, but there is nothing like that for Volcanion. Not only is Volcanion not that smart since he doesn’t realize that Ash is tied to him for a very long time, but he is way too grumpy. Eventually he becomes a nice guy of course, but I just couldn’t get on his side. If you want to be a mean character, then you’ve got to go all in. A good example is Kamui from Tsubasa. He didn’t want to get along with the heroes and never made an effort too. That was just how he was and I can roll with that. Also, Volcanion is easily one of the weakest legendary Pokemon that I’ve ever seen. The Mega Evolved Pokemon completely destroyed him in the opening scene and he never looked much better. At least that proves that Pikachu is stronger than him, but it is always sad to see a Legendary Pokemon look so weak.

He is still better than Magearna though. Personally, I wouldn’t even count her as a Pokemon based on the description here. I mean, as far as the movie is concerned, she is a robot who was given a gem and is now called a Pokemon. That doesn’t really make you a Pokemon if you ask me. She is also not all that smart and just comes off as very annoying the whole time. If she had been able to fight or defend herself even a bit, that definitely would have helped quite a lot. As it stands, things didn’t go all that well for her since she wouldn’t defend herself.

Alva’s the main villain here and he’s fairly good. He tricks the prince pretty easily and then accomplishes his goals. He knows how to use everyone else to do his bidding including Team Rocket. His Mega Pokemon army was also very formidable and their sheer numbers would be enough to defeat just about any Trainer. He simply didn’t count on Ash and his team working together with the land of Pokemon inhabitants. Not to mention that the new Mewtwo-esque DBZ character was also around to stop his city destroying blast. There was really nothing wrong with Alva and he actually had a good plan.

Chymia was a reasonable character. She realized that her younger brother Rali was being gullible again so she had to stop Alva. Unfortunately, Rali seems to have all of the political power since he is the prince so she had to ask Ash and friends for help. Her Gardevoir was certainly a powerful Pokemon to have and being able to Mega Evolve as well helped to really make her a useful ally. Hers may not be as strong as the Elite Four Champion version that Ash fought, but it was still quite tricky. Unfortunately, Rali was not likable in the slightest. It’s just hard to believe how naive he was. He didn’t suspect anything even when the villain was attacking his sister and her friends or when he kidnapped Magearna and held her at knife point. He still thought that Alva was a nice guy…and that’s just sad.

This film went back to Pokemon’s roots with some aspects that I really enjoyed like the opening fight. Remember the good ole days in the first films where Ash would wreck multiple trainers to start out a movie. That was awesome. The opening fight here was definitely a blast as well and then we also got a nice song to end the movie with. The epilogue itself may not have been super exciting, but the song was definitely well done and overall I did enjoy the soundtrack. It actually had some decently good battle tunes and the lyrical themes spoke for themselves. Additionally, the graphics were good as always. The fight scenes stand out and the sharp colors are always good for the fights as well. All of the character designs are on point and there’s not much more that you can ask for from this one.

The film never drags on either, which is important. Some plots in the Pokemon movies aren’t that interesting or are bogged down by the characters which can hurt the overall film. There was nothing like that here so the film was just fun from start to finish. I may not have liked the Legendary Pokemon much, but they weren’t bad enough to hurt the whole thing. The running gag with Ash being stuck to him may have been rather pointless in the end, but I guess it was the only real way that the film could have him stick around the way that he did. The Pokemon films are never very long so I suppose that helps the pacing.

Overall, This was another good Pokemon film to add to the total and I would recommend it. It had good action, a nice plot, a good character roster, and a fun soundtrack. This film is just a fundamentally good film even if it isn’t one of my all time favorite Pokemon films. It’s the kind of film that you could recommend to anyone, whether they are a Pokemon fan already or not. If you are, then you’ll naturally get an extra kick out of it. It’s going to be tough waiting for the next film since it’s looking like it could be one of the all time greats. A remake/alternate route to the original Pokemon episode with a super high budget? Count me in! The one annoying part will be that Ash will be back to being a rookie…again, but maybe he’ll just get really good really quick. I could definitely roll with that and since this is such a big homage, I do think that he will end up looking pretty good. Maybe Mewtwo will even appear….maybe.

2 thoughts on “Pokémon: Volcanion and the Mechanical Marvel Review”