It’s time to take a look at a rather infamous cartoon from back in the day. I only got to see 2-3 episodes back in the day so I had always wanted to check out the whole series. Well, I finally got my chance for Christmas as I took the plunge and purchased the whole series. I mean, for only 6 dollars how could I not take the plunge? These 13 episodes may fly by, but they still deliver with a lot of content and you’ll find yourself grinning throughout. It’s a fun show that you can recommend to anyone and it should feel very nostalgic.

The story follows a young hero named Link. He guards Princess Zelda and her magical object of power (The Triforce) from the evil Ganon and his demonic followers. They want the Triforce and will stop at nothing to get it. The only way to stop Ganon for good is to claim his Triforce for themselves, but it’ll still be a very dangerous undertaking. As a result, the two sides are at an eternal stalemate and that’s where the show picks off. Oddly enough, Ganon’s side is the only one that continues to attack and press the advantage. Link and Zelda are content to just relax all day and not actually get anything done. It’s a rather risky move and honestly, it feels like their team should lose after a while. Ganon’s big advantage is that the heroes don’t dare wander into his domain while he breaks into their castle every day. The heroes have no guards or defenses and the villains are able to teleport into the room anyway. They broke in while Link was sleeping once and many times they even nab the Triforce. They’re always caught of course, but it just shows how easy it should be for the villains to claim the win here.

It’s pretty admirable how the show just launches into the episodes without explaining much. The mystical weapons? Nah, the viewers will understand what is happening right off the bat. It’s the way most shows should go about this and this lets the pacing be very fast. The heroes just go about their business and we follow as best we can. If anything, the show developed such a fun little world that it makes you want to see more of it. Where are all the citizens of this big kingdom? We see some briefly in 1-2 episodes, but for the most part the Kingdom is completely deserted, which may seem odd at times. At least this means that Link and Zelda can go anywhere at any time without having to worry about a crowd. That’s definitely a nice perk.

Link also isn’t your average selfless hero as he doesn’t care for the job. He just wants Princess Zelda, which isn’t the greatest reason to stay. He isn’t even a great fighter half the time as he lets his sword do all the work. It must be nice to have a sword that can fire energy blasts which destroy most foes in a single hit. Even with that weapon, Link is overwhelmed most of the time and gets captured/defeated many many times. It’s quite telling that he is still the strongest warrior in the kingdom. That should speak volumes. While he may not be much of a hero, Link is still pretty charismatic. His catchphrase “Excuuuuuuuse me Princess” is one of the greatest in all of television and it’s really cool that he is able to say it almost 30 times in the span of 13 episodes. He is only cut off once so Link usually gets to squeeze the whole line in. Link may not have any magical abilities, but his weapons certainly seem to be magical as they can shrink and enlarge at will. Link can even materialize his shield to help him out in the tougher fights.

Zelda’s a fun heroine as well, but she definitely does openly use Link the whole time. She insults him quite a lot and always makes sure to dodge his advances. I can definitely get behind her on that, but then she’ll also lead him on or accept his advances in other episodes which makes the whole thing really odd. She changes her mind on how she feels about Link quite often so you never know which Zelda to expect. It’s also strange to see her not fight all that much since her magical abilities seem to make her a much stronger fighter than Link. Her sorcery seemed to not really have any limits, especially when she was with the Triforce. It would probably be safer with the heroes than locked in an isolated room next to the window, but I suppose that I shouldn’t question royalty.

The King also appeared a few times. I liked how similar he was to the CDI games. He even said “Mah Boi” and we had some other homages like Link saying “Oh Boy” and a variation of “It sure is boring around here” The show always knew how to include some really good dialogue. Throughout the show, the writing is very strong. The voice acting is also top notch as all of the characters really give it their all for all of the lines. The King may have been overly naive, but it’s just to show that the people in the Kingdom are super innocent. They aren’t really prepared for Ganon and his onslaught of evil.

Speaking of Ganon, he was a decent villain I suppose, but probably the weak link from the main cast. I actually liked his screechy voice as it helped to make him sound whiny. On the other hand, it was a little odd to see that he was also interested in Zelda. That’s certainly not the Ganon that I remember. His magical powers seemed to be pretty decent for the most part, but since a sword blast will also take him out Ganon doesn’t get too many chances to fight. His blast was able to get past Link’s shield so that was impressive I suppose.

One character who gets a pretty big role in the show during the early episodes is Sprite. She’s a fairy who likes to interrupt Zelda and Link before things get tricky. She is a little on the gullible side as she falls for Link’s tricks, but she means well. She can fire energy blasts, which is pretty useful in a fight and comes through for Link in one of the episodes when he was trapped as a frog. It’s interesting to see her so antagonistic to Zelda considering that Zelda is her boss, but at least it shows how fearless she is.

The show’s soundtrack is pretty solid as it uses a lot of classic Legend of Zelda tunes. You’ll recognize the original music as it plays quite a lot. It’s pretty fitting for the scenes. The animation is also pretty smooth and crisp. Once in a while the show will show its age as a character model won’t really move as he/she is blasted, but that helps give the show that retro feel. It’s certainly aged really well considering how old it is and I dare say that it looks even better than Captain N. The theme song is also pretty fun as it gives you a nice wrap up of what the show is about off the bat so you know what to expect.

Given that this is an old cartoon and that it is only 13 episodes, you can probably guess that there isn’t a big plot or anything like that. All of the episodes are stand alones with attempts by Ganon to steal the triforce. Luckily, the episodes are all pretty solid. The best episode is probably the one where another Prince shows up and Link feels threatened. It’s a classic trope and you know that the new prince is doomed, but it was still nice to see him talking so tough. Also, Ganon was actually a little worried about his presence and the Prince was a good fighter so he was given more credit than I was expecting. That was a nice twist and Link still took him out in the end.

Another classic one is when Ganon gets a duplicate Zelda to make Link bring the Triforce over to his lair. The plan actually works fairly well even though Link figures out the trick right away. Still, the problem is the same as it always is. Ganon’s henchmen can’t do anything so even if he gets the Triforce, Link will just steal it right back. The “romance” in the episode was pretty sad though and it still shows why Link isn’t really a hero here. He just wants his thrills and saving the kingdom is just a way to keep from being bored. The rest of the episodes are more such attempts. Sometimes Link is a ghost, a frog, or just bored, but he always finds a way to win along with help (Sometimes quite a lot of it) from Zelda. While most of the episodes follow the same formula, they stay fresh and epic because of the great writing. I can’t stress enough just how important it was for this show to have such a solid script. 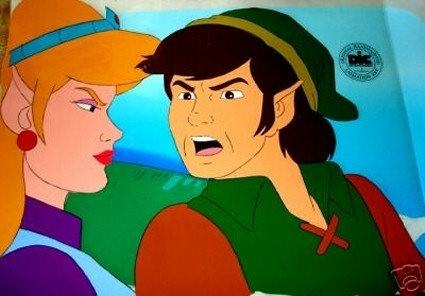 Overall, Legend of Zelda is a really fun show. I definitely wish that it could have gotten more than 13 episodes. The title is gone just as soon as it is started. Especially since each episode is shorter than the average episode for another show. The main cast are likable and we do have a nice array of action scenes which are great as well. Even if you’ve never played the Legend of Zelda games, I’m confident that you can get behind this show. It’s the kind of classic fun that can appeal to all audiences and who doesn’t know the legendary hero of time? Naturally I need to wrap up the final box set of Mario as well so I can give that one a review as well. Eventually it’ll be fun to check out other similar shows like Captain N, Mega Man, and Street Fighter. These retro shows are just too good to resist. I really wish Nintendo would come up with a new show. There are so many possibilities here!

4 thoughts on “The Legend of Zelda Review”