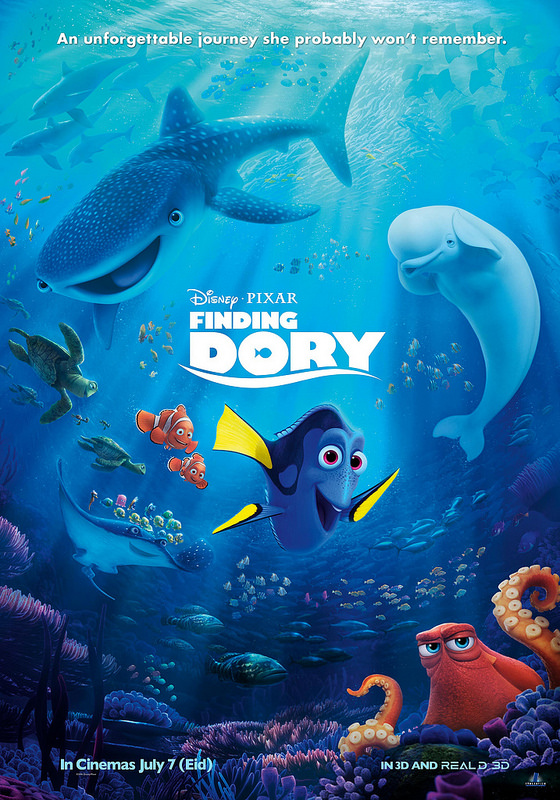 Are you ready? It’s time to take a look at the Finding Nemo sequel. I saw the original quite a few times over the years and even purchased the game recently. It’s definitely a fun series. Finding Dory takes itself a little more seriously at times and makes Dory’s past a little sadder than is used to be. It’s a pretty solid film that actually has a great ending so don’t listen to the doubters. Everyone told me what a bad ending the film had so I was expecting something really sad or tragic, but it was actually solid. Ah well, maybe people weren’t ready for a happy ending this time.

Dory wakes up one morning and realizes that she has parents. She sort of knew this deep down, but now she realizes that she has to go find them. They’re over by the aquarium/sea world park that Dory used to be at. It’ll be quite the journey, but it’s worth it to find her folks. She gets Nemo and Marlin to help her out with this. Getting across the planet would be tough for most fish…but Marlin knows a guy. The three of them set out and prepare for a big adventure, but little do they know that the team will be splitting right away.

Marlin was surprisingly a great character here. Maybe he always was and I just forgot about it. His “I know a guy” line was easily the best one in the film thanks to the great delivery (Pause and slow build up) and the way that he looked to the side while saying it. Marlin’s a little more confident than he used to be and since he did rescue Nemo from crazy circumstances, he has a right to be. He also comes through in the clutch when it matters and shows that he is a team player. I can’t say the same for Nemo though. Nemo’s very annoying in this film as he constantly takes shots at Marlin and acts like a know it all. Any scene with Nemo is one where I had to wince a little inside. It feels like Nemo hasn’t improved at all since the fist film and if anything…he’s gotten worse.

Dory is a nice character as always. Her origin was especially tragic this time as he memory got a lot worse. It was mostly just used as comedy in the first film while it’s very serious and dramatic this time. I would have preferred if it wasn’t so serious, but Dory gets through her trials with determination and persistence. She comes up with a plan in the end and has her big moment. Dory may not be as likable as Marlin, but she’s a good character. Dory’s just not my kind of protagonist and I don’t think she can hold her own film, but the subplots had enough screen time where it wasn’t too much of an issue. I still think that this film should have been about finding Nemo’s Mom, but maybe that’ll be for the third film in the trilogy.

Hank is one of the new characters for the film and he is definitely great. Hank is one of the standouts here as he plays the tough James Bond esque role. He has a lot of experience and has seen things over the years. He just wants to give up and head to the land of peace, but Dory is in his way. He agrees to help her in exchange for a pass that will get him there, but it’s a tougher ordeal than he would have thought since Dory keeps forgetting the plan. He had a lot of the witty banter and great lines in the film. It’s safe to say that he made the film a lot better.

Dory also had other friends who appeared like Destiny and other aquatic animals who wanted to pitch in. They were a little too quirky, but weren’t bad characters in the end. They’re nice pals to have around and it was good for Dory that they showed up. Still, they could have been a little more interesting. The main cast from the first film are the ones who really had to hold the film on their own with the exception of Hank since he was a really good new character.

One thing that subtlety holds Finding Dory back is the character roster. Even the best characters are only pretty good. There are no downright great characters. The closest two are Marlin and Hank. The problem is that Hank’s character was already used in Zootopia, but handled better. Marlin’s character type hasn’t been done all that often, but while he is fun, he isn’t a show stealer. Aside from those two characters, the rest of the cast struggle to be passable. Some of the characters are just really annoying like the two seals and the bird. The bird should have been cool, but did the film have to give him the worst design possible? I actually had a problem with quite a few of the designs. Even baby Dory looked a little off as the eyes were so big that it looked physically painful.

The animation was good overall though so I don’t want to take shots at it. It’s the character designs that are to blame here. I can’t say that the animation is much better than Finding Nemo’s though and considering how old that film is…it’s certainly worth noting. Unfortunately, there isn’t really a soundtrack to be found here. You won’t remember any of the tunes afterwards, which is a little regrettable. On a technical level, the film is all right. It gets the job done, but nothing more to that.

Finally, another problem is that you’re just never invested in the film. It goes through the motions and you follow along, but that’s about it. The story isn’t boring or anything….but it’s just not that exciting either. This last bit of the review may sound rather negative, but it’s just because the film could have been so much more. As it is, it’s a good film that is good for a quick watch, but you probably won’t want to be re watching it anytime soon.

To end this review on a high note, lets go back to the ending. After everyone told me how bad it was, I expected the parents to either be A. really mean or patronizing once they were found or B. Dead. If either of those scenarios had happened, this could have dropped to a 5. Luckily, the ending was really good. I’m guessing people thought that it was too happy and perfect or something like that, but I could definitely get into it. I also ended up liking Dory’s parents. Their roles were naturally very small, but they were likable and I’m sure that a third film could find a good role for them.

Overall, Finding Dory was a good sequel. It’s not quite as good as the original Finding Nemo if you ask me, but the film goes along at a brisk pace and doesn’t get boring. The writing is certainly on point and I actually really liked the ending. It was a highlight. While this film won’t move you the same way that Inside Out, Zootopia, Frozen, and other big animated films as of late have, it is still a good movie. I’d recommend checking it out if you haven’t already. You don’t really need to watch Finding Nemo to enjoy this film since they recap it through dialogue anyway, but you should check out the first film as well. It’s a classic at this point.