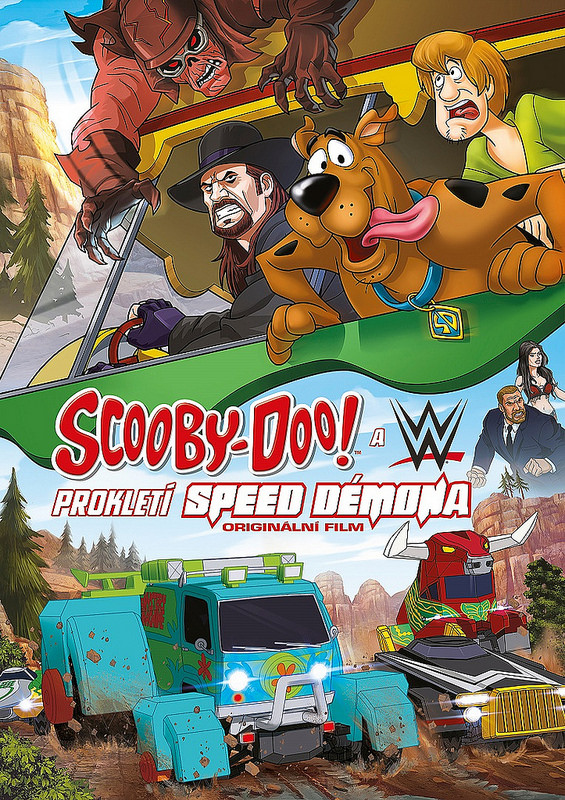 All right, time for one of the latest Scooby Doo adventures. The first WWE adventure was actually pretty fun. I’ll take any excuse to throw in some fight scenes to the classic Scooby Doo formula you know? The problem is that this one takes the wrestling out of the WWE for the most part as it tries to be a racing film. That’s a verrrrrrry odd strategy if you ask me and it really didn’t make any sense. Sure, we still had some fights, but not as many as you would expect. The writing is a clear step under the last few films, but it’s still a reasonably enjoyable film.

Shaggy and Scooby have finally realized their dream of owning a burger joint. Now they can take customer orders and then eat the burgers instead of serving them. They’re still in business somehow, but hey…that just shows how strong the economy is at the moment right? Their favorite wrestler is the Undertaker and they’re rooting for him to win it all. Unfortunately, his partner was attacked by a mysterious foe and now they will have to take part in the race since Undertaker needs a partner. Can they win the race and stop this interloper or are they completely doomed?

I have to give myself numerous pats on the back here as I correctly guessed who was the villain within the first 10 minutes of the film. I don’t like to brag, but I just have that knack for this kind of thing. The person seemed rather suspect. Not in an obvious red herring way, but in a more legitimate fashion. Lets talk about the suspects. There is Undertaker and his sidekick. The sidekick may be doing this to make Undertaker look good and this is a nice way of taking out the competition. There’s the Russian team who may be using this as a way to undermine American confidence in racing. There’s the All American hero who loves messing with his hair and his tough female co-rider. They bicker a lot, but it could be an act. There’s the crazy twins who can teleport and throw dust at their opponents. They’re clearly not ordinary humans so they could have a stake in this. There’s the daughter of the president of the company who enters against his wishes along with her partner so they’re suspect. Finally, there’s the president who always wanders away right when the ghost shows up. Suspicious? Not at all! He makes it way too obvious to be suspicious.

There are quite a lot of suspects here and the cool thing is that most of these characters are real so that ups the stakes. Can you picture these celebrities actually doing this? Although if you’re a Pro Wrestler I suppose you’re used to acting. The actual race isn’t bad as anything goes so all of the cars work on bumping each other out of the way. There aren’t a whole lot of gimmicks to most of the cars, but Fred built Undertaker one that has rocket boosters so that helped to give him a bit of an edge. Not to mention that he could eat on the go with the original food truck. 3 day races like this are always interesting since the first 2 days barely matter since the winner of the final stretch takes it all anyway.

Before I talk about some of the negatives, lets keep on talking about the strengths to get them out of the way. One thing I really liked here was that the “civilians” actually fought back. Usually everyone just runs away from the ghost in a Scooby Doo film even if he/she isn’t all that threatening. That’s not the case here. One guy sees the ghost approaching and actually decides to hide behind a pickup truck to plan his attack and then launches at the guy. He actually puts up a really good fight even if he ended up being defeated instead. Likewise, nobody cowers at the sight of the villain aside from Shaggy and Scooby and I loved this change of pace. Imagine how awesome it would be if this became the norm.

The animation is as good as always. The Scooby Doo formula is certainly written in stone at this point and animated as such. I don’t think they need to worry about switching up the style because it just works so well. Unfortunately, there aren’t really any good music themes this time. The main theme was pretty solid I suppose, but we only got to see it very briefly. The writing is fairly bad though and that takes us into the negatives.

This first one may not really be the film in particular, but I have to address it. Shaggy and Scooby get more and more annoying with every film that passes by. I can’t really say that their antics are funny and they are easily the worst members of the Mystery Gang. I wish they wouldn’t be so scared all of the time and they’re very over the top. How can the Undertaker be their favorite wrestler if they’re completely terrified of him? The whole thing just doesn’t make any sense. Their food gimmick is good, but that’s where the buck stops at this point and the rest of their character is just sad.

Next, the characters are too gimmicky in this film. Every character is extremely exaggerated like the Russian guy or the American who was focused on his hair, but actually wasn’t very tough in the end. They’re all caricature at this point instead of real characters. Most films have quirky characters of course, but you have to do it with some tact in order to be really effective. The twins with the dust were just as bad as they were constantly waving their arms around and talking nonsense. I can’t picture their fans being very thrilled about their portrayal because it was just pretty disappointing on the whole. There were very few reasonable characters in this film.

It also reused the Daphne/Velma plot for what must be the 6th or 7th time at this point. Daphne gets a new friend so Velma gets jealous, but the new friend turns out to be shallow so they become buddies again. It’s a really old plot at this point and shows that they’re running out of ideas. At least the ghost was cool though. I mean, he barely even pretended to be a ghost this time around, but a physical opponent makes sense so the heroes have something to fight. The design was good and he was decently formidable so that was satisfying.

Overall, This film was a bit of a step down from the last few Scooby Doo films and just most of them in general. The positives are quite good at least like the fact that we got actual fight scenes. They weren’t as solid as the first WWE film, but they were still fun and that’s why I want more WWE films. We just need to focus on the wrestling and the fighting instead of trying to throw in races and all of that. Also, where was John Cena? I was really surprised that he wasn’t in the film as that seemed like a no brainer. If you’re a big Scooby Doo fan then you should check this out, but otherwise the first WWE film is just better in every way. It’s a better way to start off with the series. I expect the series to make a recovery with the next one.