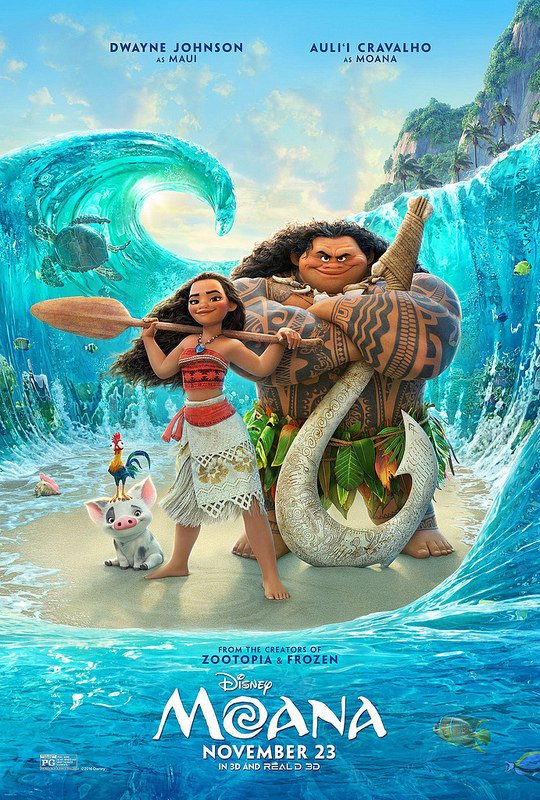 It’s time for a fairly recent animated film although it feels a little old by now. We haven’t gotten too many films that take place in the islands. Lilo and Stitch is one of the only big ones that I can think of. I’m perfectly okay with this since the big cities are where I like the films to stay. It just makes for a more engaging backdrop. That being said, the film did have some pretty nice visuals along the way thanks to the nice action scene at the end. It’s a good film, but one that does have some issues.

The plot revolves around a girl named Moana. She is destined to rule the island at some point so she is learning as much as she can. That being said, she wants to venture off the island because she feels too constricted there. It’s prohibited because of a risky endeavor led by her father. The choice is taken out of her hands when she is chosen to save the world by delivering a relic to an island where it was stolen long ago. She’ll need to enlist the help of Maui, a demigod whose abilities are matched only by his intelligence. He really doesn’t want to help, but he gets taken along for the ride. Can these two really manage to get the stone to the island where they will have to face off against Te Ka? It certainly won’t be easy!

Moana is a good main character. I’d want to leave the island if I was in her shoes as well. The economy wasn’t going well and the job market seemed to be wearing thin as well. The village simply needed new materials and she would have to venture out to get them. Moana is very determined and keeps getting back on the track no matter how many times Maui fails. The ocean’s blessing was also super useful since it meant that Moana couldn’t drown. She had a little crisis of self confidence towards the second half of the film, but fortunately she managed to get past it.

Unfortunately, Moana is perfectly countered by Maui who is one of the worst Disney “heroes” that I’ve ever seen. There is absolutely nothing heroic about this guy. He seriously tries to drown Moana in one scene and then leaves her to die in a blocked off cave in another. Fortunately, the ocean saved her the first time and she found an exit the second. The fact that Maui tried to murder her is glossed over later on and his attempts grow less drastic as time goes on. That being said, he was already too far gone for me to see him as a likable character. Even up to the end, Maui is really just fighting for himself and his ego.

What makes this even worse is the fact that Maui isn’t even very tough. On the contrary, I’d say that he is actually very weak. He can’t really hold his own against anybody. He gets wrecked by a giant crab and doesn’t even put up a good fight against the fire demon. Maui is really just one of those characters who is all talk and no action. He gets old rather quickly. For the other supporting characters, we also have Moana’s father and her grand mother. The Dad gets annoying pretty quick as he tries to stop Moana since he lost in his mission a while back. I definitely don’t think leaving the island should be banned. The grandmother is nice and seems to know a lot, but she also does act a little crazy half the time. Her antics probably could have been dialed down a notch.

There are two main villains here. The first one is Tamatoa, a giant crab who sparkles. This guy humiliates Maui quite a lot so I was on board with that. He’s a fairly intimidating villain as well even if he is easy to trick. He made for some pretty fun scenes so I was glad to have him on board. He didn’t seem that strong, but his strength was ultimately enough anyway. The other big villain is Te Ka, who defeated Maui so completely that the poor guy was scarred for life. Te Ka’s fire abilities were pretty great and the heroes definitely didn’t seem like they had a chance against her. That being said, it does lead to one of the film’s biggest plot holes. Te Ka is probably the best character in the film.

Here’s where the plot gets messy. Okay, the whole point is that the ocean is sentient in this film and wants Moana to save the day. She needs to get the pendent/stone/mcguffin to the island to seal the demon. Here’s where the plot falls apart. We learn that the water can move and walk around. It can grab things and shoot blasts of water. Why isn’t the ocean just placing the item back itself? From what we see in the movie, it would be very easy to stun the fire demon and place it. After all, the ocean finally does take the fire demon down in one shot when it acts at the end. The fire demon keeps healing so it’s not down for the count, but it would be long enough for the water to finish the job. There is no reason for it not to act and I feel like this is a glaring hole in the film’s script/plot. It just made no sense and I was puzzled about that during the entire film.

The film isn’t very long so the pacing is relatively sound. Quite a lot happens during the time frame as the heroes have to reclaim Maui’s weapon, fight off pirates, and go on a bunch of adventures. I have to say that Maui’s shape shifting was as underwhelming as you’d expect though. He made a big deal about how he would get super tough once he had his weapon back and he still had a habit of getting knocked around by everyone. I was just surprised that he never lived up to his own hype.

The animation looks pretty good. The water is crispy and clear. The energy blasts and disaster zone with Te Ka are also visually striking. It’s a pretty well made movie all around in terms of the visuals. The character designs are also on point and I certainly didn’t notice any animation errors. By and large, the writing is pretty good as well. It’s nothing special, but it doesn’t make any mistakes so that is most certainly a good thing.

The humor can be a bit weak in this film. One of the main comedy subplots is that Moana has a bird who can’t really think straight. This means that he is always getting lost, pecking the ground, or just getting in everyone’s way. There’s nothing really fun about seeing a bird just crash into everything all the time and I could never get behind the plot. As far as animal mascots go, this one was a complete dud.

Overall, Moana is a good film. It goes by fairly quick and has some nice action scenes at the end. What holds it back is mainly Maui. The guy is just unbearable whenever he’s on screen and comes off as a total jerk. The bird subplot certainly didn’t do the film any favors either. It’s a fun flick, but odds are that you’ll find yourself choosing something else to watch. There’s nothing that this film does particularly well that isn’t completely surpassed by a better film. Don’t even get me started on comparing the songs to the classic “Let It Go” That won’t end well. Still, if you’re in the mood for a tropical animated film, there aren’t a lot of other options. This will definitely be the option for you.