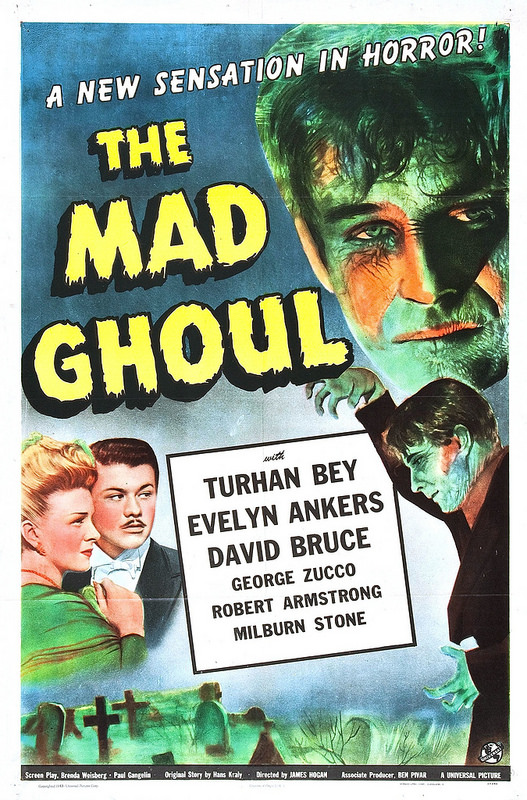 It’s time for a film that tries to play out like Frankenstein. In its defense, it’s far better than Frankenstein, but that’s not saying a whole lot. It’s a pretty short film with a small cast so it never drags on or anything, but it doesn’t try to do anything exciting either. It’s a movie that simply happens and there isn’t a whole lot more to it. It would have ended up with a more decent score if not for the animal testing at the beginning. Why do so many of these films have to start off by testing on animals? It’s not right and the film should feel bad.

Alfred is a psychotic maniac who wants to see what various old gasses can do. He experiments on some animals and finds that they can completely paralyze you. (and then kill you) He then finds out that by stabbing someone in the heart and giving the liquid (Wouldn’t it just be normal blood?) to the dead person who was hit by the gas would revive them. Ted is a student who becomes an understudy to Alfred. He’s impressed as well, but just wants to hang out with Isabel as he plans to propose to her. She comes over for a visit and explains to Alfred that she no longer loves Ted. Alfred quickly assumes that he is the rebound guy so he tricks Ted into the experiment room and hits him with the gas. Ted now becomes a mindless servant for a while. He’ll regain his consciousness for a bit after getting a heart, but then he’ll be knocked out again. It’s a vicious cycle, but somebody’s got to do it. Can Ted get out of this loop?

In case you’re curious, the rebound guy is Eric. He’s not a bad character, but he’s definitely way too cocky for his own good. He agrees to meet Ted in a dark alley in the middle of nowhere by himself and he gets very close to being murdered. I like the confidence I guess, but you think that he’d be a little more alert right? It’s also hard to like the character since he may have known that Isabel already had someone, but maybe he didn’t know. Isabel certainly changed her mind suddenly, but I suppose that happens. Still, she should have worked up the courage to tell Ted instead of dragging it out and messing with him. That certainly didn’t help the situation and I definitely can’t say that I was a fan of her here. Isabel certainly didn’t act like a great heroine.

Next up is Ted and he has definitely got to be one of the more naive and gullible main characters out there. He should have suspected foul play the instant he was trapped in the room with the gas. How could that have been an accident? He believed Alfred for some reason which was pretty dicey and then he could never put the pieces together when he would regain consciousness. The guy was just way too dense and I couldn’t take his monster form very seriously at all. It’s like he had a bad hair day every few minutes or something. Not very scary or intimidating if you ask me.

Alfred is basically your average mad scientist. He wants revenge on everyone who has spurned him and he’ll make the world burn. There’s not much to the guy and old scientists rarely make for very interesting villains. The guy’s love for music is probably the only interesting thing about him since we don’t get enough musical villains. That being said, it’s not as if it ultimately turns him into a very good character or anything. He’s still the same unoriginal villain that he always was.

The best character in this film was a detective. Unfortunately he didn’t get to live very long. Still, he was able to figure out that it was no coincidence how Isabel would perform somewhere and then a murder would occur. He knew that the Mad Ghoul was following her around. The problem is that he used a very risky plan and ended up paying for it. At least the cops got a little more serious after this and decided to make their move. It’s too bad that the detective had to go though since he had all of the good one liners. He didn’t take orders from anyone and loved to get the last word in.

One thing that could have helped the film would have been to have actually had a good monster suit at the ready. Messing with Ted’s hair wasn’t all that scary to be honest. I wanted to be scared, but I just couldn’t bring myself to buy into it. The monster also doesn’t really do anything very impressive as he just walks around and tries to look scary half the time. Still, I wouldn’t call the film boring or anything. It’s reasonably entertaining as it flies by, but I would have liked a little more excitement or some good characters to deliver some banter for the film. Without that…it just doesn’t work.

Overall, It’s not as if this film makes you perform a lot of logical leaps or that there are a bunch of negatives to be found here. The film just didn’t do much to make you engaged with what was happening. Add to that the quick animal scene and it was absolutely curtains for the film. If you like watching retro monster films, I’d recommend checking out Gamera instead. The actual monster there is a little more notable and the character roster is better. When the only good character is a detective who doesn’t live for very long, you know that there’s a problem.