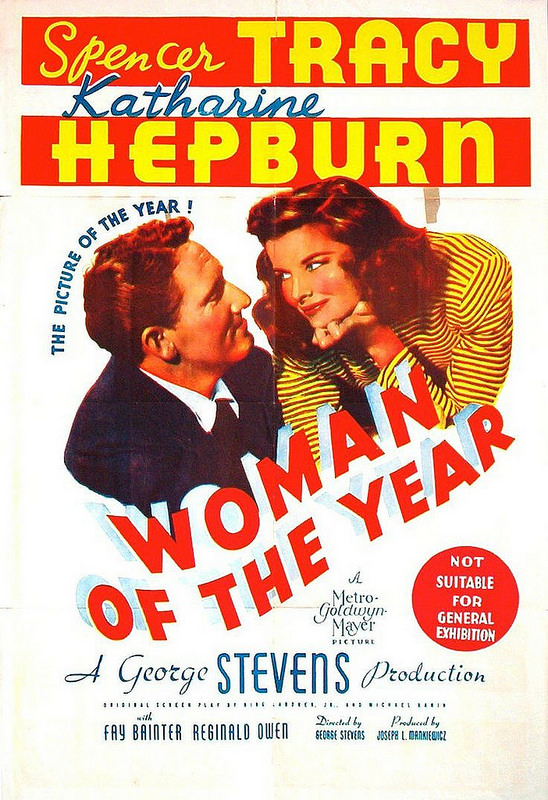 I’m glad that the poster mentioned how this isn’t suitable for general viewing because it really isn’t. Yes, I’m talking about the content. It’s not violence or fanservice, but just a bad message that the film churns out which basically says that the heroine tried to step out of her designated gender line and so she was in the wrong. Lets delve into this film a little more, but it all feels like some kind of big scam considering that the title suggests that this will be a very empowering film.

The film starts off with a reporter drinking away his sorrows at a bar. He’s your stereotypical American. Sam like sports, has an over inflated ego, and drinks constantly. He hears a coworker by the name of Tess on the radio who says that sports are basically pointless and she wouldn’t mind if they were banned. He gets incredibly triggered and starts yelling a lot as everyone gently kicks him out of the bar. He writes a quick editorial back at her and the wars start. She’s completely destroying him in these written arguments and the boss begins to worry that it’s getting too personal. He tells them to knock it off and Sam realizes that he’ll have to “win” some other way. He invites Tess to a baseball game and they almost immediately decide to get married. Phase 1 of Sam’s plan is complete…time for phase 2!

Sam wants Tess to stop overshadowing him and making him feel bad. While they are co-workers in the magazine, they are on different levels. Sam writes pieces on sports and nobody really cares about him. Tess has connections within the army and ties to foreign ambassadors and people of very high stature. She speaks dozens of languages and is also rich and known as one of the most charitable individuals in the world. Sam is jealous and I suspect that he has been for some time now. He wants her to be a normal housewife or he’s going to embarrass her socially. He decides to skip out on her father’s wedding because he’s a jerk like that and does his best to destroy her legacy as such a pioneer for women’s rights. Can he succeed?

Short answer: Yes. Long Answer: He causes a lot of damage and does undermine her efforts at every turn. Towards the end of the film, Tess starts to get over dramatic to make Sam look good in comparison but it’s far, far too late. While the film doesn’t necessarily say this either, the whole thing seems like a plan of Sam’s from the beginning. I feel like he only married her so that he could try to get her to retire from being super successful and then he can finally feel superior. The whole thing felt like a way to put her down and the film never made this out to be a bad thing.

On the contrary, most of the climax is about Tess trying to make him a breakfast. Plot twist! Despite Tess being a super genius she has never been inside of a kitchen before. She doesn’t know how to make Toast or how to crack an egg. You’ve gotta be kidding right? That’s such an exaggeration and there is no way that she wouldn’t be able to do these things. I was getting triggered myself during the scenes as Sam is still being petty the whole time. He just sits there making mean facial expressions and mocking her efforts the whole time. She shouldn’t even have to be making it up to him since he was in the wrong the whole time.

Lets backtrack a bit though. When they first went out to the baseball game, Tess made an effort to learn it. Learning a sport and all the positions can be pretty tough if you’re not familiar with it, but she used her analytical experience from solving foreign matters of great delicacy and did it. She was then able to really get into the game and have a good time. Next, she invited him to one of her diplomatic meetings. Sam quickly found out that nobody there spoke English so he took the chance to make fun of someone since the guy couldn’t understand him and then Sam dashed out. He gets pretty full of himself from then on and tries to visit Tess in her office without talking to her secretary. Why would he be allowed in without an appointment? He has absolutely no respect for her position or duties and seems to think that he should be given priority over all of them. “Drop your appointment with the Prime Minister…I want to go to McDonalds tonight!” is essentially his attitude.

The only real mistake Tess made was to try manipulating Sam. She made him breakfast in bed for the first time and started talking about having a kid out of the blue. Sam was thrilled about this since having a kid would in theory mean that Tess would be focusing on her job next. She then lays the atom bomb on him by walking in a fully grown kid that she adopted from an unsafe environment. The kid’s a refuge. Sam’s immediately apprehensive, but you can be sympathetic to him. It’s like waking up on Christmas and your parents saying, “Remember that Nintendo Switch bundle that just came out with Mario Odyssey?” Me: Yeah! Them: “Well, we got you a Nintendo 64 and a used copy of Superman 64” Me: “Nooooooo!”

Superman 64 is actually a good game and adopting a kid is a really nice thing to do. They can easily turn his life from a very tragic one into a blessed one. The problem is that it’s not fair to just push this onto someone with no warning and even more so when you bring their hopes up only to smash it down. The kid can’t speak English either which makes the situation worse and the whole thing is unfair to Sam. This is the one part of the film where I don’t blame him for being upset and returning the kid to the orphanage was the right thing to do. The pair couldn’t handle the kid, but none of them really had a discussion with the other. This was also a pretty tricky moment since he did it as she was supposed to accept her Woman of the Year award. He naturally decided not to attend either although to his defense again, she claimed that he had no life so he should come. That’s kind of a mean thing to say.

You can tell by this point that the film was now trying to make her so exaggeratedly mean and insincere that we’re supposed to root for Sam. The problem is that I’d never do so in a million years. You really have to watch the film to see what a terrible character he is. At the very least, he does believe in getting even and tries to do so every time he is slighted.

It’s a shame that the film had to die in the writing department/plot because it could have been good otherwise. It’s part comedy and the humor is handled rather well. I liked one of Sam’s friends who is always talking about how well he fights. The guy came through when it counted and I always like the genuine friends like that who enjoy a good beer but are around when it counts. The scenes of Sam getting embarrassed are also pretty fun as you’d expect. It’s just all for naught in the end…such is the power of a bad ending.

Overall, I’m clearly not impartial in this film. I was on Team Tess the whole time. If you were rooting for Sam then I imagine that you would probably like this film quite a lot as he gets the last laugh time and time again. I never like seeing someone running around trying to please the other when it’s the mean character’s fault in the first place. It’s just unsavory and brings this film down quite a lot. I recommend avoiding it like an old Cheese stick and just watching something a little classier like The Magic School Bus. At least that show is educational and always leaves you with a heartfelt message.