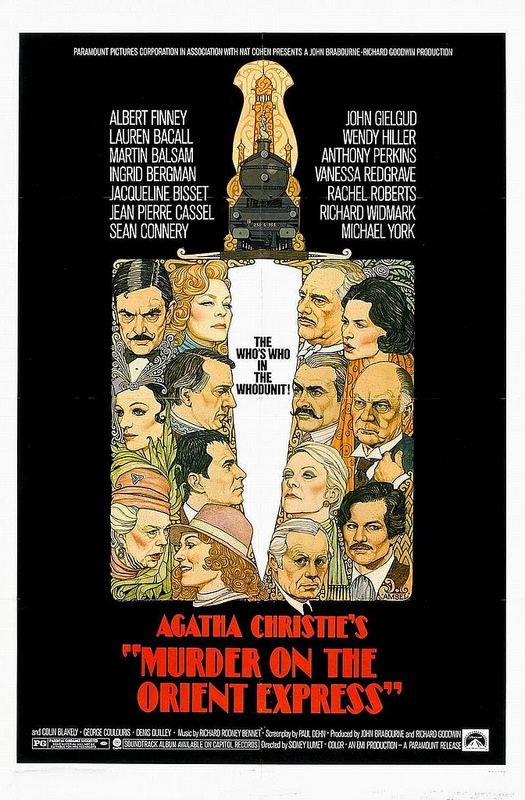 It’s time for a mystery thriller from Agatha Christie. And Then There Were None is still her best work as it’s a perfect example of how a murder thriller should go. While this one couldn’t quite match that master piece, it’s a very solid film and one that you should add to your repertoire. With all of the suspects boxed in on the train, it’s the perfect scenario for Detective Poirot. Still, he’ll have to work fast since the snow won’t last forever.

Poirot was enjoying a very peaceful train ride and was off duty for a change. He hadn’t expected to have any problems, but then a dead body is found. He quickly begins to deduce that there was something more to the victim than it would appear. Poirot also decides to interview all of the suspects and there were certainly a bunch. First is Harriet, a bold woman who loves to voice her opinions and is constantly chattering. She has something to say about everything so it is difficult to actually find out what she knows. Next is Hector, the secretary of the deceased. He is fairly mild mannered and always nervous. Then there’s Beddoes, a seemingly perfect butler who is always ready to answer politely. He was close to the deceased and delivers the nightly wine. Princess Natalia may be rather old, but that would also make it easier for her to do something while staying inconspicuous. She has a maid named Hildegarde who has served the master faithfully for many years so maybe it was all for this moment. Diplomat Rudolf and his wife Elena appear to be rather quiet for most of the journey. Rudolf does blow up whenever someone talks to him though so are his nerves cracking or are they both quiet because they know something? Mary, the teacher is around as well and her scholarly knowledge could be sinister. The Missionary Greta always seems rather timid and doesn’t know English too well, but is it all an act? There’s also Antonio, a car salesman and one of the only reasonable people here. He’s loud and bold and certainly isn’t nervous like the rest of the passengers. He’s ready to help the country and that could be suspicious. Finally, there’s the actor Cyrus. He always seems to fade into the background and that may not be an accident. We also can’t forget Poirot’s friend Signor. Sometimes friends aren’t as innocent as they appear to be. Poirot has a lot of suspects to flip through so this’ll be tough.

I love a good mystery and the whole film is about that. Poirot’s interrogation of every member is pretty fun as he grills them. Since most of the riders are either lying or hiding something, it really does make his job very difficult. The only co-operative guy was the car salesman who also happened to be the best character in the film. It’s no coincidence as I was glad to see someone being at least a little co-operative. Perhaps he was a little too eager so that makes him suspicious as well, but something to think about for sure.

The pacing is pretty tight here. The opening which shows a crime in progress is fairly short. It just gives you enough time to see each of the characters and then we are quickly taken to the train. Once at the train, it never feels like the movie is dragging on. While the mystery doesn’t start immediately, it gives you a chance to learn about each of the characters and gauge the reactions of each when things finally start. Naturally in any good thriller, you know not to pay too much attention to the reactions though. The guilty party is typically an expert and can feign any reaction somehow.

I was pretty satisfied with the ending. It’s not really a cop-out or anything like that. It’s probably not an ending I would want to see all that much as it would then start to feel like one, but done sparingly like this it works well enough. We’ll see if you can end up guessing what happened.

The underlying story in the prologue is fairly dark, but fortunately the film doesn’t go into it much. It was handled optimally as you know enough to understand the situation, but the film doesn’t go over details or try too hard for the edgy angle. It’s something that I hope the modern remake is taking notes on. The writing is quite good as you likely have suspected. I don’t know how strict of an adaption it was from the book, but I suspect that the writing is rather similar. All of the characters are sophisticated and it makes for multi layered dialogue as a characters says one thing and means the other. It results in everyone trying to manipulate one another.

If there’s one character who’s rather annoying (Aside from the guy who died rather instantly) it would be the missionary who has a hard time speaking English. Her scene dragged on for quite a while and it can be hard to get what she is saying. Moreover, it feels like what she is saying doesn’t actually matter. I’m sure it was relevant in some way as Poirot explained everything at the end and went into great detail with each member. It was probably relevant, but it didn’t feel like it was and I forget what part of it helped solve the case. I would have chopped that scene a little. Still, that’s really my only complaint with the film so you can tell that this is quite a solid one.i

Overall, The mystery genre is a tough one. I personally think it is one of the toughest ones to write and maybe it is The toughest one. Coming up with a good mystery sounds difficult and that’s probably why I enjoy reading them so much. It may be the best genre next to action, but it’s one that has to be handled delicately. Case Closed is an example of an excellent one. The only pitfall that they have is that the mystery only works once. They don’t have much replay value because when you watch it again, you already know the ending. It’s why the remake coming up should tread carefully. Granted, you won’t actually know if it’s the same ending until you’re at the end of the film so maybe it won’t matter all that much. Regardless, if you haven’t seen this film, I’d suggest changing that right away. It’s aged quite well and makes for an engaging watch.