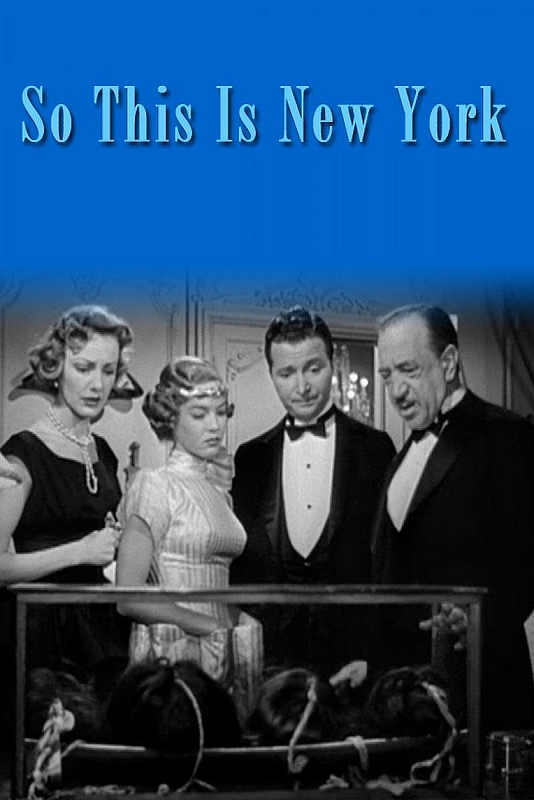 It’s time for a really retro comedy film. This one came out all the way back in 1948 after all so it’s one of the oldest titles that I’ve seen. It’s aged pretty well with the snappy sort of humor that I’ve come to expect from the leads. Ernie is easily one of the most sarcastic main characters that I’ve ever known and makes the whole film a lot more fun. The heroines go a little overboard on how unlikable and gullible they are so it’s a good thing that the protagonist is usually around.

Ernie has been doing pretty well at his job. It’s been fun and he’s close to a promotion. Unfortunately his wife wants them to move to New York so her sister can land a rich man. She likes a local butcher, but that’s not distinguished enough for this family. Ernie protests, but he ultimately realizes that it is futile and goes along. Once they’re in New York, the sister goes after all of the men and they’re all eager to oblige, but this is New York….they’re a little more worldly than the characters suspect.

First and foremost, I definitely have to give Ernie another shout-out. He recognizes the lunacy around the New York customs and acts accordingly. Everyone wants a tip and they want the main characters to spend money constantly. Ernie’s not really into the bribery and all of that, but quickly learns how the system works. He gives 0.10$ tips and only tips a quarter in the hotel. He’s pretty wise not to waste his money. They are on a limited budget after all. The guy also knows how to throw a mean right hook as he takes care of one sinister character who was trying to pull the moves on his wife. Ernie’s certainly a no nonsense character and even comes up with backup plans in case his two companions try to waste his money. It doesn’t go well, but I liked the attempt. He just never lets up with the sarcasm.

Another character who came close to being the best in the film was Ernie’s boss. I actually felt pretty bad for the guy since Ernie’s departure caused him to lose quite a bit of money. He needs Ernie back and fast or else it’s all over so he writes some intense letters and then even comes to New York to find him. The ending is a little cheesy, but I liked this guy’s persistence. He certainly wasn’t just going to sit around and wonder what was happening.

It’s hard to say who the main heroine is, but lets say it’s the sister. She was one of the worst characters in the film as not only was she tricked by just about all of the men, but she was also very mean. She played all of them for her own amusement and then chose to go with the richest individual. Fortunately, the gangsters took care of that anyway, but it’s hard to sympathize with her at all. In that sense, the ending with the butcher was perfect since both of them kept cheating on the other. I highly doubt this behavior will stop either so they’ll stay together but will always be looking behind their backs as they wonder what the other is doing. It’s perfect!

The wife is pretty bad as well though. She is pretty naive the whole time and doesn’t realize when the strangers are getting too friendly. She makes things tough on Ernie the whole time and doesn’t realize that she is just wasting a lot of money. She’s simply not very smart. While not as over the top as the butcher, I would have liked for her to have been a more strategic thinker. Here’s an example of when she really didn’t know what she was doing.

A washed up comedy guy shows up and demands 15 thousand dollars to let them into his play. The Wife agrees since maybe the sister will form a connection with him, but naturally the play sank and then he kept all of the money. It was such a huge rip off. I can understand giving someone 100 dollars, but 1K, much less 15K in those days was completely unheard of. It was just too much. What’s worse is that they noticed Ernie’s hidden stash of money and used it as well. Talk about going all in eh? At least Ernie got a tip about how the horses were rigged and played something else, but it was all for naught in the end.

The film’s pretty fun as you could tell, but I could have done without some of the romance. Since it’s all pretty fake and all of the guys turn out to be bad anyway, I would have liked more scenes of Ernie critiquing the New York customs. A scene in the pizza place would have been cool or heading to a McDonalds. The scenes of them hanging out with the guys were only good when Ernie was around to insult them. He wasn’t even too subtle about it which was pretty enjoyable. He just said it like it was. The only scene with Ernie that may have dragged a little was when the drunk guy was telling him about the crooks. That scene could have gotten to the point sooner, but maybe it’s just because listening to drunk speak always has me shake my head.

Overall, It’s a pretty short film. The movie isn’t even 90 minutes long so it maintains a quick pace throughout. You’ll have a fun time watching it and the film even has some pretty nice effects like the epic zoom ins of the character’s faces and the translator for the cab driver. It’s also nice that you can still associate with most of the things that the film pokes fun at. Even if New York has changed in many ways since the old days, it has also remained the same in others. The cycle goes on after all. I’d recommend checking it out and most modern comedy films could learn from this one. One last change I’d make to the film would be ending it about 3 minutes earlier. Not being able to afford to leave would have been priceless!