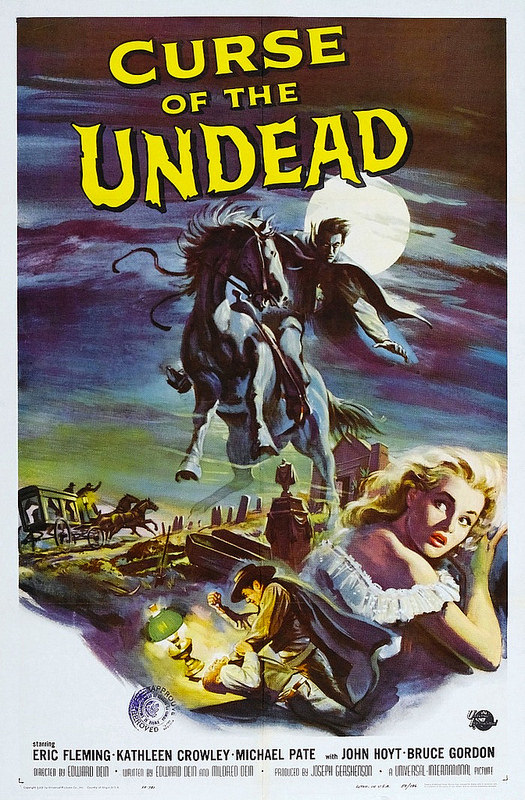 If the last film was YES! tier then this one is I want my Money Back tier. This film is just so bad and since it is a vampire film I expected a bad result from the start. It was still a little worse than I had anticipated. The Wild West angle is actually far more interesting than the Vampire one and you know how I’m not really a fan of the former either. It’s all pretty tragic to be honest, but at least the ending will go down as a classic.

There is a town where a mean man named Buffer is messing with everyone. All he wants is to be able to have a nice beer every day and bully an old man. That’s his only wish and so the town allows him to do whatever he wants. Things take a turn for the worse when the old man is murdered and then Buffer is forced to murder his son in self defense. Dolores decides to place a wanted ad to avenge them and a wandering gun for hire named Drago shows up. Dan advises Dolores against this since hiring someone to destroy someone else is pretty similar to doing the job yourself. You will have effectively committed murder. Dolores doesn’t care and even claims she’ll pray to the Devil if necessary. Dan realizes this is a lost cause and goes to the Sheriff to try and work something out. Little does he know that Drago is a vampire!

I think the main reason why I didn’t mind the Wild West setting this time was because it didn’t feel like one. You don’t see a lot of sand or anything since they stay in town the whole time. It was a nice fusion of genres and the film handled it well. The locale is one of the only positive things I can say about the film. Beyond that, I also liked the Sheriff. He still deserves some blame for not actually trying to stop Buffer sooner. He took quite a while to get involved and it was too late by then. At least he was very tough though. He didn’t back up for anyone and stood his ground at gun point. The way he handled the band of bandits was pretty admirable so it’s a shame that he went out on such a sour note. He was just a really good character.

Prepare for the onslaught of negatives now though as they are quite extensive. First off, Dolores is a very annoying main heroine. She faints quite a few times and always makes the wrong choices. I’m not against her hiring someone to take Buffer down since the authorities weren’t doing anything about it, but letting him into her house was mistake number 1. The next one was going right to sleep and not noticing him messing with her. She also didn’t notice that she had bite marks on her neck even though I feel it would be pretty obvious. I’m confident I’d notice something like that on my neck and clearly it means she hasn’t washed it in a while. She then proceeds to faint several more times so Drago has his fun and she even sides with him instead of Dan. She made no good choices and was just a struggle to watch.

Drago is even worse as he’s a vampire who doesn’t know what he is doing. I don’t even think he had a master plan so much as he just wanted to suck everyone’s blood while also having fun doing it. He acted as if he was on her side to gain her trust but why? He would leave her alive so he could keep using her I guess, but it was a pretty random move. Furthermore, if he can hypnotize people, he should do it to everyone so he’ll have a life long supply or blood for all of his needs. He came off as rather distasteful and there was no way to like him. It’s a shame since he could have been a decent character in theory. The idea of a lone gunman coming into a town and liberating it is nothing new. Of course, when the two sides are the bully and an evil vampire, you know that the battle is lost before it even begins.

Dan is an okay character I guess, but he seems content to stay as an observer until something happens that he doesn’t like. He didn’t really help to solve the Buffer problem until the gunner showed up and then he made his move. By then, it was a little late for words. He did a good job in the final battle though so I have to give him credit there. He’s certainly better than pretty much all of the other characters by default. The Sheriff was really good as well as he didn’t let any of the others mess with him. Buffer wasn’t a likable character of course. You couldn’t feel sympathetic to him either since he was a villain the whole time. Perhaps he wasn’t as bad as the vampire, but that’s a pretty low bar to set.

The dialogue and writing for the film wasn’t bad, but it never became an engaging watch. We also got an incredibly random, but dark origin story for Drago during the film. Apparently he murdered his brother and then murdered himself so his punishment was to obtain super strength, high speed regeneration, and immortality so he can murder other people. Pretty interesting punishment. Another thing that hurt the film was just the amount of times Drago had his way with the heroine when she asleep. Those scenes are very dubious and hard to watch. Add in the fact that he’s brainwashing her and it sinks the film to new lows. At this point she basically doesn’t have a choice in the matter. The film was already past saving, but these scenes really ended up hurting the score more than the rest put together.

Overall, This was a pretty bad vampire film. I expected nothing less though. It has some pretty decent scenes and as I mentioned the human moments weren’t bad. The posturing at the saloon wasn’t bad and the various bar moments, but the vampire just brought the whole thing down. The film also just liked being dark like when the kid died or the origin story. It was pretty unnecessary the whole time. If you want a good vampire film…I recommend just looking for something else. The odds of finding a good one are extremely low. It’s almost a contradiction.