This review is of the edited TV-14 version. All thoughts below should be addressed as such as a review of the unedited version would likely be far harsher. 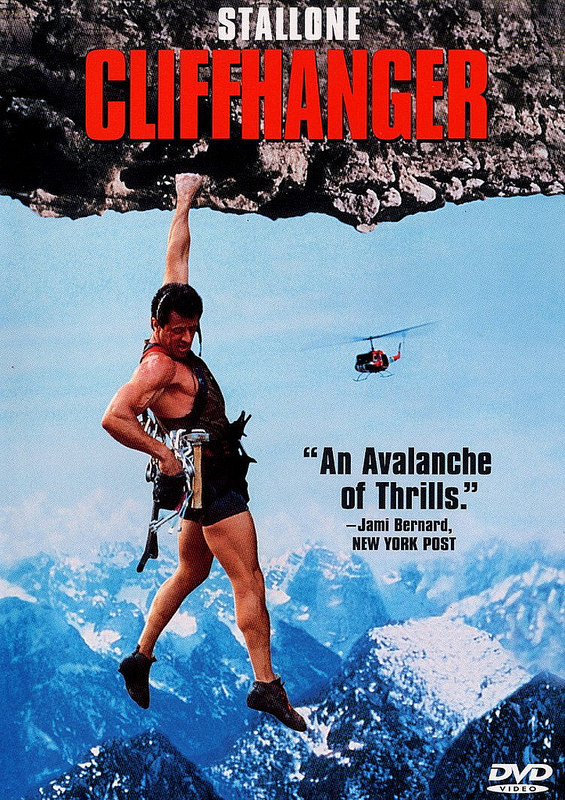 It’s time to look at an old action film about climbing the mountains. It’s definitely not a film that I had heard of beforehand, but the premise is fairly interesting and it’s always fun to remember what action films were like back in the day. I mean, this film isn’t as old as I may be hinting, but it’s an era that is certainly past now. It’s a pretty solid film all around and it doesn’t make any big mistakes along the way.

Gabe is one of the world’s greatest mountain rescuers. The average employee on the rangers uses the Helicopter, Gabe prefers to climb the mountain on foot. It was all going well until one of his friends (Hal) brought along a girl to climb the mountain with him. She is afraid of heights though and Hal has fun with this instead of being understanding. Gabe starts to perform his rescue, but the knot comes undone and the girl falls to her doom. Hal blames Gabe for this so Gabe quickly quit the Rangers and ran off for 11 months. After having his fill of guilt tripping himself, Gabe comes back only to find out that a group of people have gotten stuck on the mountain again. Hal is going off to find them, but Gabe knows he won’t be able to get the job done and tags along as well.

This cuts into the villain side of the equation. A group of plane hijackers are after 100 million (I think that was the total. Maybe it was 300 mill) but an FBI agent shoots the plane down and that’s how they crashed. They decide to trick the rangers into helping them find the money. Of course, they just go into threatening mode once the Rangers show up and have them at gun point. Hal and Gabe will have to think fast to get past these guys and back home. They’ll also have to do it quickly as the main heroine (Jessie) and the boss are planning to go after the heroes since the rescue is taking too long. They wouldn’t last a minute against these villains.

I was a little surprised at first when a large chunk of the intro focused on the villains. I wondered where Gabe was, but I guess the writers wanted you to really get to see all of the villains. They were pretty important in this film after all. Eric is a good leader for the group and he certainly plays for keeps here. He’s very persistent as he keeps coming up with different plans to take Gabe down for good. Gotta give him some kudos there. The tech man for the team was also pretty solid as he made sure that the gadget for finding the money could only be used by him. See, this is a smart minion. Most of the others would have just told the boss the password and that would have been game over.

As much credit as I give the villains for their resourcefulness and all…I still had a hard time buying into the plane hijacking. It’s just a little hard to swallow that all of the professional agents would go down so fast. At the very least you need to shoot the guy standing in the center if you’re going to be turned into swiss cheese anyway. So I did like the FBI agent there since he got one last shot just to mess with the villains. He certainly did a lot better than the average agent. Probably the best character in the film if we’re being honest. He just needed to be a little faster on the draw next time.

The film does a good job of mixing the action and the humor. It can actually get very violent and serious at times, but the TV version did a seamless job of editing out the worst parts and glossing over the fights. As a result we were just left with the hype parts. The soccer villain was also pretty interesting since he towed the line between sadistic villain and pun happy eccentric. The soccer skills were definitely impressive, but not as impressive as Hal’s comeback. I’ve always agreed with the characters on this one. If a villain is trying to destroy you anyway, it’s gotten to the point where it’s pretty personal so you may as well counter with a pun for the added disrespect.

The one liners in this film were pretty good like the line about how the campfire was expensive as the heroes burned money to stay warm. I mean, I probably wouldn’t light a fire when there are a bunch of people with guns out to get me, but I suppose the villains didn’t have their glasses ready yet. The romance is the only area of the film that’s rather weak but it doesn’t play much of a role anyway. It pretty much comes and goes with no real fanfare. The writing is all right as it delivers the humor well with the one liners but can be lacking otherwise. Not weak enough to hold the film back though.

There’s nothing really negative to say about Gabe. He didn’t handle the whole situation very well as he just ditched Jessie for absolutely no reason. Leaving for 11 months without a single form of communication and then showing up so Jessie can move out was a terrible plan. Of course the point is that Gabe is best when he’s on the mountain and then he wrecks everybody. He can certainly fight well and he did do his best to save Hal’s friend back when it counted. I don’t like Hal because of how petty he is for a while. I did keep some respect for him though since he still did his best to help Gabe out afterwards. Once the villains took out the guns and started attacking, there was no more time for bickering. The two of them just teamed up without a word. You’d expect that two guys who were friends for so long would be able to do that but it’s something that a lesser film would probably forget to be honest.

An important thing that the film also did well was keeping the pacing quick. The heroes and villains were always on the run so the brief campfire scenes didn’t last long. For an action film like this one, it’s important that the action keeps on going. That may sound obvious, but it can be difficult to always have something happening since the writers have to think of reasons for why each side isn’t dead yet. Since they’re on a snowy mountain that gets really dark at night, that helps quite a bit. It’s always fun to have an ongoing chase and the film’s soundtrack, while forgettable, worked well during these scenes.

Overall, Cliffhanger is a solid film. On one hand, it’s not as if it does anything spectacular that will always let me remember it, but sometimes you don’t need to have a scene like that. The film was consistent throughout and it’s not as if there are many action movies on top of a mountain so I think I’ll definitely remember this film for quite a long time. It is intense so I’d recommend waiting for it to be on TV, but then you’re set for a solid action film. You’ll get to see Gabe put his boxing moves to good use here. The villains never stood a chance to be honest. Now if only the cops could have done something to help. That would have been the icing on top.