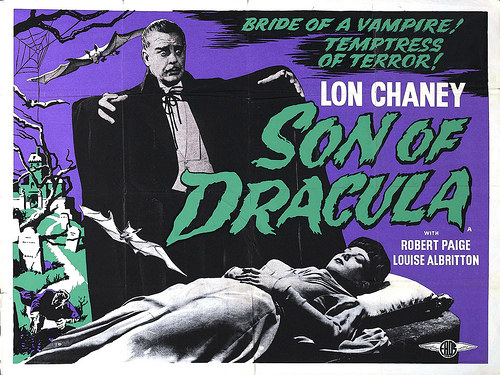 Given that I’m in the middle of a vampire arc in Detective Conan, it seemed like a good time to review a Dracula film. It’s definitely pretty odd to see Lon Chaney playing the role, but this way he continues to play all of the Universal monsters at some point so I can roll with that. Unfortunately, not even his acting can save the film as it still ends up being your standard Dracula film through and through. It’s just hard to make a good Dracula film whether it be in this day and age of even in the past.

So, the plot starts with a mysterious man moving into town. The main farmer dies very mysteriously during this time frame. That’s when Dracula shows up and suddenly Katherine marries him despite being seriously engaged to Frank. Frank suspects something is up and grabs his gun, but this Dracula fellow appears to be bullet proof and intangible so the bullet goes through and destroys Katherine. Frank is quickly arrested, but it appears that Katherine is still alive. She is now going to be doing experiments with Dracula at night and says she won’t be available during the daytime anymore. Something’s fishy here, but Frank’s in jail so he can’t do much about it. It’s going to be up to Lazlo and Brewster to see what’s happened. Can they really deal with two vampires though?

The film does have a unique twist that I can get behind. Usually the main heroine falls head over heels for Dracula due to mind control and just generally looks terrible the whole time. The twist this time is that Katherine actually went with him willingly as part of her own plan. She plans to murder him once she is undead as well but to do that she will need Frank’s help. She’ll bust him out of jail so he can go to Dracula’s coffin during the daytime and destroy him. Technically it’s a full proof plan, but he makes one big mistake…he goes outside while it’s still night time. Heh…..heh…..hahhahahahahahahahaha!! Of all the mistakes to make…..why is Frank so terrible? I mean, we finally have a good plan and then he messes it up. He even destroys Katherine afterwards because he doesn’t want to be a vampire. I wish I could say he made the right call, but I really can’t. He comes across as a very ungrateful guy who’s of no use throughout the entire film. While Katherine’s plan was extremely dangerous, risky, and probably not good at all, she did pull it off. Frank got the easy job and he still messed it up. That’s got to be a downer.

Dracula doesn’t look very good here. I mean that’s to be expected considering how many weaknesses he has, but it’s still sad for his fans. It’s gotten to the point where just being in the same room as a cross is enough to get him sweating and the doctors always handle him without too much trouble. Dracula is at his best when he’s just uttering threats as opposed to trying to follow up on them. At any rate, at least Dracula is fun to listen to. Seriously, Chaney has one of the best voices in cinema with ease. Most other actors can’t even get close to his level. Dracula is just not a good character though.

I felt like the rest of the cast were pretty slow on the uptake here. Katherine’s sister made a few half hearted attempts to see what was happening, but didn’t play her cards right. She basically told Frank that the cops were onto him and took forever to get out of harm’s way. Brewster noticed right away that Alucard is just another way of saying Dracula, but just brushed it off and didn’t remember until we were deep into the film. He could have saved lives if he had acted with a little more urgency. Lazlo was experienced at least so that was nice to see. He may have been the best character here even if that isn’t saying a lot. At least he was making a real effort to do his best.

The Sheriff meant well. When he investigated the place and found the dead body, it was certainly reasonable for him to suspect Brewster as an accomplice. It’s also hard to take their word for it that a vampire is on the prowl since that doesn’t seem all that reasonable. At least he was better than the other cop who couldn’t guard a man if his life depended on it and got scared of everything. If you’re going to be a cop, I feel like there’s at least a minimum level of bravery that you should have and it should be enough for you to not be scared of vampires.

Overall, Son of Dracula is more of less what you’d expect from the series. There’s not a whole lot to say about the film that I haven’t already. At least there was no animal violence this time. That’s certainly a nice start. The supporting cast was also quite reasonable for a change even if it could still be annoying how they wouldn’t realize anything until it was too late. The cops were a nice addition. I wouldn’t recommend this film and you should probably stay far away. Just remember for the next time that while Dracula can be scary, it can always be worse. You could be dealing with the Wolf Man who has less obvious weaknesses. With Dracula you can hold up to sticks and cross them and that’s enough to deter him. The ending to the film was pretty weak and here’s how it should have happened. Frank becomes a vampire along with Katherine and then they play it off like she was in the woods or something and that’s why her body vanished. She explains that they were just imagining they saw her dead body and this way everyone lives happily ever after. Sure, Frank didn’t get a choice on if he wanted to be a vampire or not, but it can’t always be perfect for the guy.