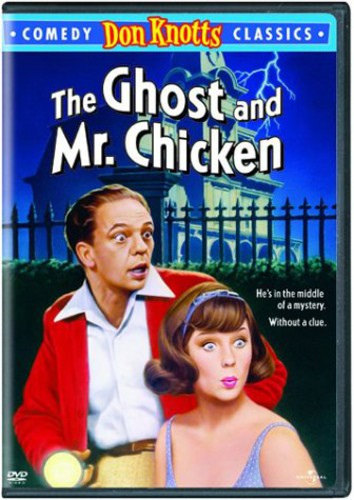 It’s always sad when you’re known as a chicken among the community. Just think of how rough it would be when it’s a small community so you are going to be seeing the same people everywhere. Well, that’s the case for our lead in this film (Luther) as everyone openly mocks him. It’s almost admirable how despite this he keeps adding for fuel to the flame. Panicking in the opening minutes certainly didn’t help his case.

Well, the film starts off with our reporter in training driving down Main Street at night. He hears someone scream and comes across a dead body. The excitement starts to overwhelm him but before he can faint the main character stumbles over to the newspaper office/police office. Luther tries to explain what’s happening but goes hysterical so his colleagues have to insult and mock him a little bit to calm him down. Just as he tells them all about the murder, the “dead” guy shows up as he was apparently just hit on the head with a branch and fainted.

Now Luther’s reputation has shattered even more. The newspaper is on tough times though so they need a scoop and have to take a break from mocking the main character. Their best bet is to send someone into the haunted house. Luther is essentially dared into going inside and he decides to do so to show everyone that he isn’t a total chicken. The problem is that ghosts keep messing with him and he even faints. On the verge of tears he tells everyone what happened, but can he prove that this was the case or will he also be known as a liar now?

It’s definitely a really fun film. You don’t really see comedy films like this one anymore and it’s a shame since they work so well. You can’t sympathize with Luther but I suppose you can at least sympathize with the fact that he held his own in court and wasn’t humiliated as badly as I had thought he would be. He doesn’t do a great job of improving himself at all and is basically content with going through the same motions that he’s always gone through. It’s why he is perfect for the role.

Ollie is definitely a pretty mean character who tries to undercut Luther at every corner. Still, he never gets too extreme and due to the nature of the film he can be pretty entertaining. If the plot was handled seriously then there is a good chance that he wouldn’t be likable at all but as it stands he was probably the best character in the film. You can make the case that he has more reason to dislike Luther than the other way around since from his point of view Luther took the main heroine away. Ollie also did offer to go into the haunted house with Luther, even if it was only to mock him.

An underrated character is the head of the newspaper company. Not only is he one of the only characters who gives Luther a chance but he even defends the guy in court. Honestly you’ll just feel bad for him since he does a great job but then Luther keeps on sabotaging him. The supporting cast was just really good in this film and naturally that makes a big difference. The judge was also pretty fun and it made the scene of everyone going into the haunted house pretty fun. Actually it was pretty surreal to see the Judge come up with that plan.

As for the ghost moments, I think it was safe to say that everyone probably guessed what the last second stinger would be. Ignoring that little moment I would have definitely said that there was nothing supernatural about the place. It was all things that could have been explained naturally after all. Even the painting although you have to suspend a lot of belief for Luther not noticing the blood would be fake. Well, it is Luther I guess.

The plot with the corporate gangster trying to muscle in on the place and discredit Luther was a cool contrast since that plot was played completely seriously, the guy wasn’t afraid to destroy Luther either if necessary which made for an intense final fight. You rarely see these rich business types actually enter the realm of combat themselves nowadays so that was certainly unexpected. It helped give the film some action to balance out the comedy and it worked quite well.

I have to say that the romance was pretty weak though and the only underwhelming part of the film. For starters, Alma was seemingly already taken with the rival Ollie but it didn’t stop Luther from flirting and hoping they could be together. Sure, later on in the film she says that they weren’t really together and all, but given how the had apparently been eating lunch every day, driving together, and Ollie had been calling her things like Sweetheart which she was fine with….it seemed rather clear what was going on. Even Ollie was shocked when she basically ditched him out of nowhere. It’s nice for Luther that if all worked out but this is definitely not how you build a romance. It really just fell flat and took up too much time.

Overall, This was a really fun film. The humor was on point and the cast was pretty good. The tension of whether the mansion was really haunted or not will be tearing you up inside until they announce the verdict. Ollie is a fun rival and gets a lot of standout lines while Luther’s panicking is always pretty intense. If you haven’t seen this film yet then I would definitely recommend it. It’s not the most popular movie out there but it can definitely hold its own against any big comedy film.

2 thoughts on “The Ghost and Mr. Chicken Review”