This review is of the edited TV-14 version of the film. Keep this in mind when reading the review as one for the unedited version would be far more negative. 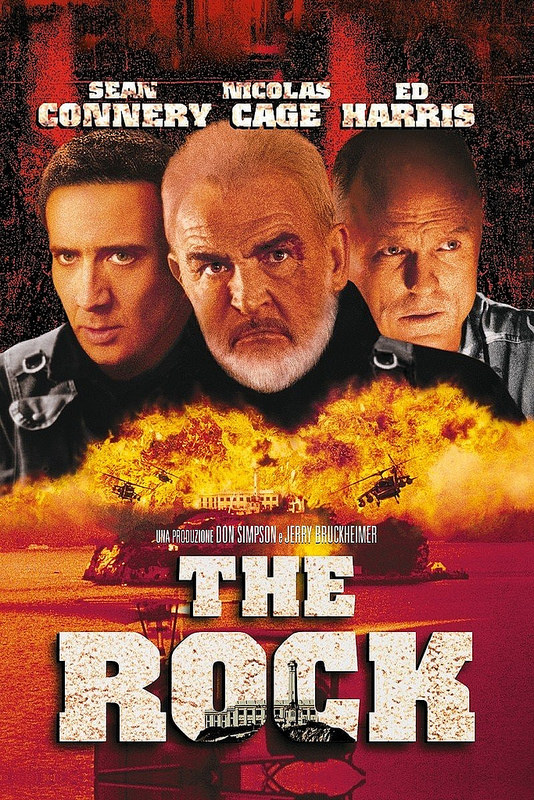 It’s time for a retro action film from the 90s. Sure, it may not be that old and calling the 90s retro is a little risky, but at this point I’d say that it’s old enough to be a valid point. You won’t really see this kind of film come out nowadays because the cinematography is just very different and new styles have surfaced. These 1-2 men against an army films can always be a lot of fun though and this one is handled well. I do admit that the first half does beat the second as the film begins to putter out but both halves are still pretty good. It’s more the fact that the film is so long and climax fatigue starts to set in while the first half is more laid back, but still has the explosions you’re waiting for. This is a Michael Bay film so there are quite a lot of explosions.

The film starts off with a bunch of terrorists breaking into Alcatraz and kidnapping 81 civilians. They demand 100 million from the government or they’ll use the chemical missiles that they stole from another base (Where they murdered everybody) to destroy 80000 people in San Francisco. The government is forced to call in the local chemical expert, Goodspeed. Goodspeed is used to being in a lab and doesn’t really like violence but he isn’t really given an option. He won’t be enough though so Mr. Mason is taken out of jail to help out. Mason is the only person to ever escape Alcatraz and he used to be a legendary agent for the British Intelligence. If anyone can stop these guys, he can. Will these two vastly different characters be able to put aside their differences and save the world or are they doomed to take a loss here?

Right away one thing you’ll notice about the film is that the soundtrack is actually really great. The themes are nice and fast which make the action scenes more fun. It amplifies the visuals and just makes the whole adventure feel a lot more complete. The visuals are also pretty good for the various locales and the combo works pretty well. Since a lot of films don’t really bother having a soundtrack I always feel the need to give a shoutout to the ones that actually pull it off. It’s an important thing to have.

Goodspeed is a decently good main character. He panics quite a lot but he’s never really been a field agent so it’s all pretty new to him. He still wants to do his best to stop the villains and save lives. He never really waffles on this and stays true to the goal. He fights when necessary as well and doesn’t bck down. He also tends to be a nice guy as he doesn’t put Mason on the spot in front of his daughter. He’s a quality lead. Fortunately, our other lead is also good. Mason’s the expert of the film. He’s one of the best hand to hand fighters the army has got and he’s also really good with a gun. This combo definitely makes him very lethal to everyone else. Anything can be turned into a weapon with this guy. He’s certainly not heroic the way Goodspeed is though. After the government locked him up for 30 years the guy appears to have gotten jaded with life in general. He just wants to make sure he gets out of this in one piece. The guy certainly has good reason to be upset at everyone though as he did get a pretty bad deal. No trial and everyone keeps on lying to him. Still, he has to man up in the end to save his daughter so he presses on. The ending may not be extremely happy for him, but it’s happy enough I suppose.

The villains try to go for the sympathetic angle, at least the main one. He wants the families of the fallen Marines to get recompensated since the government ignored them and figures this is the best way to do it. The thing is, he hired a bunch of guys he has never worked with before and they’re a little more villainous than the others. They just want to murder a bunch of guys and don’t care for anything but the money. Teaming up with villains never pays off in the end. It’s just a good way to speed up your ultimate demise.

I can’t really say that the romance was all that good, but to be fair it was barely a factor in the movie. It was relegated to the backseat for the entirety of the film. It was just there to give the main character more incentive to save the city. It’s not like he needed much more at this point since the city was nearly toast, but it’s not as if it’s a bad thing. The main heroine seemed like a reasonable character.

The first half of the film with the car chase was handled pretty well. The cops look a little bad as they really made it very easy for Mason to escape. Still, it was a good blend of action and humor. Goodspeed certainly gives us a lot of great facial expressions the entire time. The film really speeds by until everyone dies and it’s just the main two. That’s where the pacing finally starts to slow a bit as the characters keep rethinking what they should do next. It’s also one of the only points without a lot of constant explosions. Still, it’s not as if this lasts for long and then the action starts up again.

As far as the writing is concerned, I’d say that it’s okay. Naturally the TV version fixed up some of the language so that significantly improved the script. That gives the writing a little help even if it is still there. It’s not a masterpiece, but it’s not bad either. It’s at a good enough level where it doesn’t distract from what’s on screen so then you can focus on the fights. This whole review really just boils down to one point, this is a solid and explosive action film. What you see is what you get here. There’s no animal violence, the violence in the fights isn’t excessive, things just move very quickly. You move from fight to fight and they’re all handled well.

The government is extremely shady as always, but to the point where it is comical. I always love seeing the government act shady while I also love seeing them look good in films. I’m fine with it either way. The film even has a bit of a stinger involving a certain assasination that everyone loves to use in conspiracy stories. It was a nice enough subplot and I wouldn’t mind a sequel where the government ends up going to court and then things get crazy.

Overall, The Rock is definitely a really solid action movie. The fight scenes are on point and there is an explosion around every corner. The film may have slightly dragged by the end but it’s hard to point to any specific scenes that could have been cut. There may be a few here and there, but it’s just that the overall length of the film is rather long. It’s still handled well at the end of the day. The main message of this film is that you have to be a good shot because if you miss the first few times, you may not get a second shot. I’d recommend giving this film a watch if you see it on TV. You won’t be disappointed.