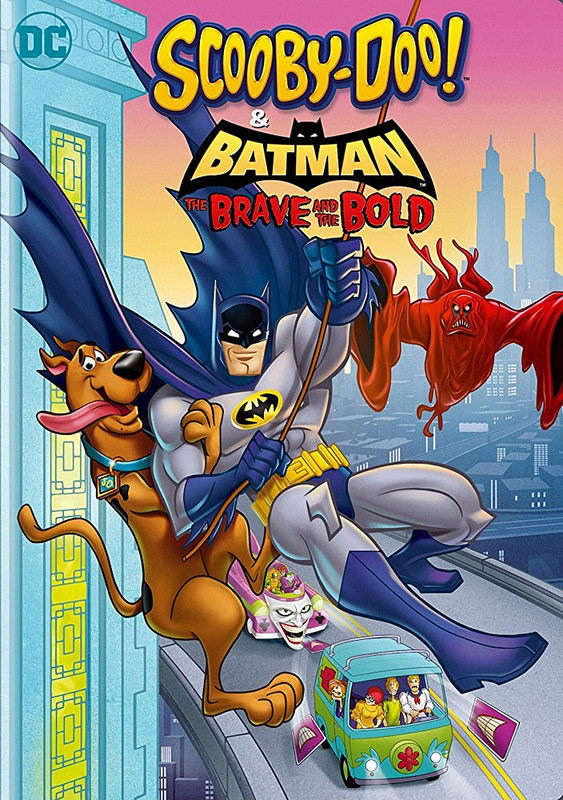 Batman and Scooby Doo have always made for a very intense pairing. The crossover just writes itself as Batman tends to be a detective series that is very serious while the Mystery Gang prefers to have a lot of fun as they save the day. The groups have very different detective styles and solve crimes in two very different neighborhoods. Still, at the end of the day they are detectives and in this film we shall see them match wits.

The film starts off with Fred and the gang attempting to solve a mystery. Unfortunately this ghost is a formidable opponent and seems to have the upper hand. That’s when Batman himself shows up and he suggests that the Mystery Gang is too young to handle villains in Gotham. This leads Fred to trap Batman while the gang takes down the ghost. They go into their usual explanation about how they knew who it was all the time in a way that is fairly self aware with how exaggerated it is. Batman then shows up and declares that the group passed his initiation and he would like them to join the official Mystery Solvers group which also features Black Canary, Martian Manhunter, Question, Plasticman, and Detective Chimp. The group exists to fight the mysteries that no single detective could. Batman only has one unsolved case in his section so the team decides to focus on that one first. A mysterious voice has been scaring Batman lately and now the Mystery Gang are being framed. It’s all connected but how? The heroes will have to find the answer to this question along with some proof, all while trying to elude the Police, Fellow Heroes, and Supervillains!

This film takes place in the Batman Brave and The Bold continuity. It’s a very good selection for the crossover and I’m glad to see the series be brought back. The two animation styles mix together very well and that’s probably why it was chosen. It’d be hard to mix Beware The Batman with Scooby Doo without switching the animation after all. Scooby Doo’s animation has always been consistent for a very long time now and this one is no exception. The animation is very clear and easy to watch. The backgrounds are detailed and the action is easy to follow. It’s definitely some of the best American Animation currently.

Since most of the film is rather solid I may as well change things up and start with the negatives first. For starters, Fred looks pretty bad here. Why is he obsessing over Black Canary when he should just be psyched to be helping out a team of Elite Detectives? This is Fred Jones, the Leader of Mystery Incorporated. I wanted to see him match wits with the others but he is a little too distracted. Meanwhile Black Canary basically mocks him whenever she appears, but given the circumstances I can’t blame her one bit. The insult almost sounded like too much for this film but then you remember that she’s just making fun of his signature tie style which can easily sound like something else if you are not prepared.

My other negative is how bad all of the heroes who aren’t Batman or Aquaman look. When the Mystery Gang is framed and Batman helps them out he is seen as guilty as well. Sure, Batman keeps running off and doing his own thing, but isn’t that par for the course with the Dark Knight? All of the heroes turn against him so quickly that we finally see them for who they are. They weren’t good friends, their bonds are about as strong as the average Naruto character. They made the hero’s job a whole lot harder.

I always think that when a villain framed a hero it shouldn’t be so easy to convince the friends. Especially when in this case Batman has had a solid track record for so many years. The only one with a decent motive is Detective Chimp since he was humiliated by Velma and likely wants payback. Is that how a hero should act? No, but that’s how I can imagine Detective Chimp acting. He really got roasted here, but I’ve never liked the character so I was personally okay with that.

Martian Manhunter’s cookie gimmick is a nice call back to Justice League International. He is portrayed as an unlikable jerk, but I can’t say I have a problem with that. He is fairly memorable in the movie thanks to this and it also helps you root for Shaggy and Scooby a little more since they are effectively being bullied and can’t do anything about it. By the end of the film Manhunter hasn’t really learned anything, but he’ll likely think twice before crossing the Mystery Inc since they’re heroes now.

Aquaman actually looks pretty good now. He is very determined and keeps on pressing Batman until he is finally let into the secret club. He’s also the only hero who didn’t actually doubt Batman which gets him big points in my book. He was really on point with his entire portrayal so I definitely had no qualms with him. Batman also looks pretty good for the most part. The opening scene may get you worried for a bit, but after the twist it’s okay. Now, he may be a little too nervous with the ghost the whole time, but this way the heroes get to console him that there are no such things as ghosts. Aside from when he’s getting mentally wrecked by the ghost, Batman’s still in character and gets some good burns in. He’s always got a plan after all and is still a solo act at the end of the day.

Aside from Fred, the gang looks about as good as you can expect. Shaggy and Scooby don’t look good, but they never do. At least Shaggy finally gets revenge for all the times Scooby steals his snacks. That was actually pretty satisfying since the Shaggy and Scooby rivalry really should be even. The film has a pretty good amount of action for a Scooby Doo film since the heroes and villains can actually fight here. The fights themselves are rather short so as not to take away from the mystery but it’s pretty cool. The special feels more like a Brave and The Bold episode than a Scooby Doo movie, but it manages to have a good balance.

The climax may start to stretch on a little too long by the end, but I’d say that it’s still executed fairly well. The last time the villain runs back into the warehouse for round 5 may have just been one round too long. A slight missed opportunity is that it would have been awesome to have seen the Mystery Gang fight once they got into costume. That would have really sold me on the final act. At least we did see that happen once in the Brave and The Bold show a while back so I guess that’s why they wanted to go a different route here.

As expected the writing is pretty solid. The film also flows by very quickly and the pacing is on point. It’s definitely pretty surreal to have the characters meet up again and hopefully we’ll get a sequel at some point or have the gang meet up with another version of Batman. Either way, I’m always game for crossovers and since Scooby Doo gets so many films, it’s always a good idea to shake up the formula a bit.

Overall, This film was pretty solid. There really isn’t as much of a mystery compared to the average film since they sort of just stumble into fights as opposed to giving us a bunch of suspects and choosing one, but when Batman’s in town you do have to switch gears a bit. The soundtrack and animation are solid and it’s a very good all around movie. I’d definitely recommend checking it out. The movie was pretty close to getting a solid 8, but I don’t think I can quite justify it. Still, it’s a high 7 and one that has quite a bit of replay value. There’s just a lot to like here.