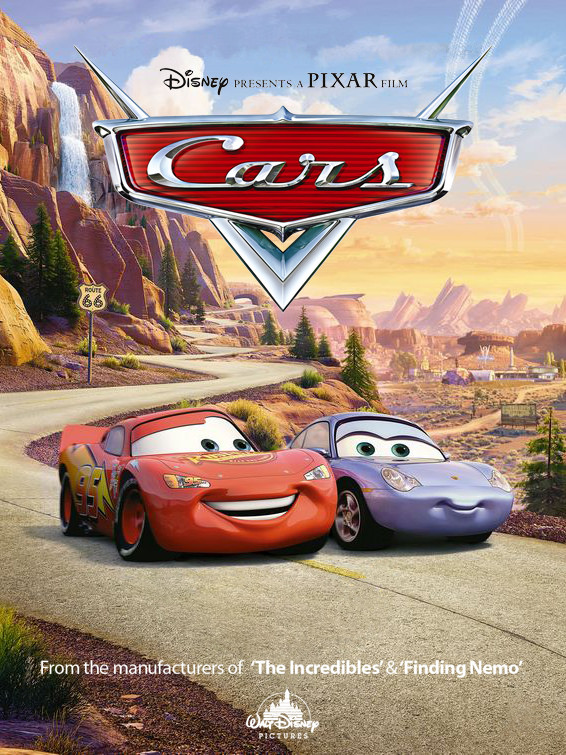 It’s time to look at one of the more well known Pixar films. This film got a bunch of comics, games, several movies, spinoffs, etc. It just got really big and that’s definitely cool for the series since this film is pretty good. It’s a fun adventure with some nice racing scenes and is essentially Barakamon’s plot, but with cars. I can’t say that I’ve really seen a whole lot of car racing films, but I’d definitely put this one very high on the list. I can also admit that I did not miss the humans.

The film starts with Lightning McQueen in the biggest race of his life. He is a rookie, but has ascended through the ranks thanks to his legendary speed. While he doesn’t win the big Grand Prix, he makes it into a 3 way tie for first place. A tiebreaker race is announced, but on the way there Lightning gets lost and lands in an old, abandoned town. Only a few cars live here now, but their businesses are dying thanks to corporate interference. A new highway has been built now and so nobody actually uses this one anymore. I feel bad for them, but if you can save 10 minutes then there really isn’t much of a reason to stop there. Will Lightning learn a few lessons about humility and not always taking the fast track through life or will he escape this town at the first opportunity?

Lightning is essentially like Tony Stark. He starts out the film as a very arrogant guy who only cares about himself. He wants to win at all costs and believes that he can do everything by himself. During the course of the film he learns that teamwork is important and that helping people out can be fun. Naturally I liked his more arrogant self quite a bit, but he’s a well developed character and nice Lightning is still a good character as well. He’s still as fast as ever and now he has a real team behind him. I do think this will make it tough on the sequels since I really wouldn’t want his character to regress. We really shouldn’t have too much drama with him because now he’s learned to be a team player and gets along with everybody. Well, it’ll be interesting to see how they handle this in the future installments.

The town is also fairly nice. I do like the fact that they have a court room with lawyers and everything. The court room scene is one of the better parts of the film as Lightning almost gets out instantly but then his plans get ruined by the main heroine of the film. Sally. She convinces the judge that Lightning should pay for the damage that he did to the roads and so the main character is stuck fr a while. He does have the good idea of trying to get out by quickly dashing off, but the town is too clever for this and makes sure not to give him enough gasoline so he runs out in the middle of the desert. These cars turned out to be a lot more clever than Lightning gave them credit for.

There are quite a few characters in the town, but lets talk about the main ones. Sally naturally gets a pretty big role. She has the biggest impact on turning Lightning into a nicer person and gives him a chance. She can race fairly well and apparently is good in the courtroom so she’s a very balanced character. Doc is the judge and an ex racer. He’s a decent character although I do have to question his backstory. He claims that after he was injured people didn’t care about him and it was hard to get back on the track, but couldn’t he simply win his way to the top again? If nobody thought he could do it then it was on him to prove them wrong. As a result I really couldn’t sympathize with this guy. Still, he wasn’t a bad character.

Mater is Lightning’s comic relief sidekick. He is falling apart, but he means well and is a nice guy. There’s nothing really negative about him, but he doesn’t add anything to any of the scenes. He’s really just here to be here. I preferred the truck that drove Lightning around. He seemed like a nice guy and so I’m glad that Lightning stuck with that crew. They may not be rich or anything, but they do seem to care about Lightning and are a group of fun cars to be around. They should get along with the townsfolk based on their personalities.

Of course, Lightning had the two meaner rivals to deal with as well. The King seemed like an all right guy though and his skills are pretty good. He stays at the front of the pack for about 90% of the race and always plays fair. Unfortunately, I guess he expects everyone else to play fair as well since he seemed unprepared for the others to crash into him. He’ll have to improve his skills, but since he’s retired I guess he won’t really need too. The other rival is essentially like Lightning, but a little more extreme and he never got converted. He’s definitely the most serious threat to Lightning and gets a lot of burns in. The film definitely did a good job with the two rivals. It makes the races a lot more fun for sure. Lightning’s visions were also correct since his rival really made the most of the head start while Lightning was busy at the village.

The animation looks pretty solid. I’d say that the movie probably put most of the budget into the first race as it definitely is the most impressive part of the film. The character designs are on point throughout and the final race also looks pretty good. I would have liked more than two races, but I suppose it would have been tough to squeeze more in. As it stands, the two races definitely gave us a good bit of action. Pixar is definitely known for their quality and this film is no exception.

I would have liked to have seen more of Harv though. He never actually appears, but still ends up being one of the most influential characters in the film. The guy knows what he is doing so it’s easy to see why he became an agent. Lightning could learn a thing or two from him since I wasn’t thrilled with the ending. Everything about the ending was good except for one part. In a moment of kindness, Lightning decides not to cross the goal line and instead pushes a crushed car to the end himself. That’s nice of him, but Lightning was right outside the goal line so he should have quickly touched it and then saved the guy. It wouldn’t have even taken a full second and so it wouldn’t have made much of a difference. Why let the rival win when you don’t need too? It’s supposed to be a powerful scene of Lightning finally realizing that winning isn’t everything, but when you’re that close you’ve really just got to grab the win.

Overall, Cars is a very fun film. It’s a very peaceful movie despite the quick car scenes. Fortunately the dialogue is strong and the cast of characters are interesting. It’s a film that is carried along by the quality of writing. This transforms what could have been a mildly interesting film about a bunch of cars talking into a really enjoyable experience. When you think about it, not much happens for the majority of the film since it’s just Lightning hanging around the town, but the film never ends up dragging on. It just keeps on going slow and steady to the finish line. That’s when you know that a film is good. A good film needs action scenes to keep it on top. A great one can be good with dialogue alone. It’s not as if I’m calling this a great movie, but it’s a very good one. It has a lot of replay value and gets a good mix of action and comedy. The humor here isn’t too forced or out of place. It’s given in nice, small doses that work well. If you haven’t seen this film yet, then I’d definitely recommend checking it out. Hopefully the sequels can be as good.