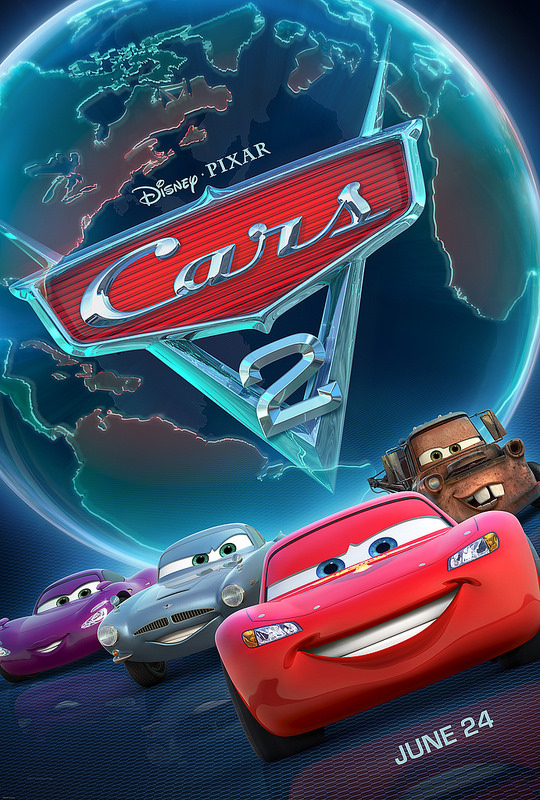 Cars 2 is definitely a sequel that never hit home with the fans the way that the first did. There are quite a few reasons for this, but the biggest one is that Lightning McQueen has been dethroned as the main character in favor of his comic relief sidekick, Mater. This is a huge downgrade and while Lightning still has a fairly big role, his scenes mainly remind you how great the film would have been if it had stuck to that.

The film starts off with Lightning McQueen finally coming back home in order to relax for a bit before the races start up again. He hangs out with the gang and looks forward to a good time. Unfortunately, Mater notices a car named Francesco mocking Lightning on a radio show and tries to defend him. Mater does such a terrible job that Lightning has to defend Mater and it forces to step back on the track in order to prove himself. Mater may have gotten Lightning into this, but it’s up to our favorite race car to get himself out. The only problem is that Mater is sacrificing Lightning’s chances to win at every turn. Can McQueen still pull out one last win?

As I mentioned, the film is quite good when Lightning is on screen. He has certainly kept his development from the first film and doesn’t regress in any way. He is now the experienced veteran that you would expect him to be and he even won 3 World Championships off screen. McQueen coming back to visit for a while instead of entering more races also shows what a quality character he is. When Lightning is forced to go up against Francesco, it is a very tense race because both of them are champions in their own right. It’s also a fun all star race because there are a bunch of other cars who are known from various other countries and are competing in this race. While it’s clear that the main two racers are far above the others, it’s a good way for the film to raise the stakes. It’s a natural continuation of the first film’s plot and Lightning is already established as a good enough character where you definitely want to root for him. While he’s not an all powerful race car on the track and Francesco is actually faster when going straight, Lightning pulls out everything he learned from racing in the town and that gives him a really good edge by the end. Then Mater’s bad advice makes Lightning lose the race and we’re reminded that this epic plot is only the subplot.

The main plot actually follows Mater as he helps out two secret agents known as Holley and Finn. They have to stop someone from blowing up all of the cars in the Grand Prix. The two agents think that Mater is actually someone else since the actual agent put his tracker on Mater in a last ditch effort to keep the intel from the villains. The problem is that Mater isn’t very smart and the agent still did end up dying. It’s a rather brutal scene and it’s definitely a big contrast to the rest of the film. The whole movie is so light hearted otherwise and you’re not supposed to give the poor agent a second thought, but it still is quite sad. Mater could have saved him if he was a little smarter.

Again, this is where Mater will likely lose you. You’re supposed to root for the guy since he means well and by the end of the film he realizes that he has to get a little smarter. That would be fine, but the problem is that he is a little too over the top for you to actually buy into it. The film does wipe away his biggest mistake of making a mess all over the carpet with a plot twist, but he’s still just a really bad character. He certainly isn’t someone you can root for, that’s for sure. The plot is rather predictable as the characters naturally find out the truth about him at the end, but by then it’s too late. Mater is easily the worst character in this film and I took it personally right when he sabotaged Lightning’s first race.

The two agents aren’t bad though. Holley is doing her best to complete this first assignment as a field agent, but is having a hard time since Mater just thinks she wants to be with him and nobody is taking her seriously. It’s a pretty rough time for her, but she does her best to keep her composure and still
save the day with her gadgets. Finn is the other agent and he’s a veteran who has been in his share of fights. He definitely knows how to use hand to hand combat even though he is a car and while he is completely fooled by Mater’s act even more than the rest of the characters, he also ultimately decides to be Mater’s friend anyway.

The action scenes are fun and the homages to James Bond work well. See, the film’s humor isn’t all that awful. In fact, when Mater isn’t around it can actually be pretty enjoyable. It has a nice blend of quick lines and situational humor. It’s just that Mater makes everything dial it up to a 9. This wouldn’t even be a bad thing if he didn’t have to end up saving the day at the end. That’s really what makes the whole thing cheesy. A good example of an exaggeratedly unintelligent character is Knuckles from Sonic Boom. He pulls off the role because it’s not like he’s actually some kind of excellent secret agent or anything like that. In fact, things with him don’t even end up panning out all that well most of the time. It makes the whole plot feel a lot more natural and wholesome. Mater is just given way too much credit.

As far as rivals go, Francesco is rather generic. He’s really just here to fill in the role of the mean rival car. He doesn’t actually do anything past the role, but he doesn’t do anything wrong either. I definitely didn’t mind having him around and seeing more of him would have probably been fun. It’s just a shame that Lightning’s supporting cast is always around to embarrass him and hurt his arguments. Even Sally looks really bad in this film so I can see why Lightning just takes the pit crew with him and leaves his other friends behind. They’re not exactly morale boosters.

Some of the situations also seem a little forced for the plot. Lightning would certainly know better than to get off the road when Mater tells him too. This is for 2 reasons. One, Lightning can see that it’s a straight path ahead and since he knows that you should never turn in such a situation he should have just ignored the advice. The bigger reason is that prior to this Mater had already been rambling into the intercom as he chased after Holley so Lightning could easily put two and two together to know that Mater likely still wasn’t talking about him. There’s no way he should have actually ended up losing that race. Lightning McQueen had that in the bag.

Well, as expected the animation is still pretty sharp. I wouldn’t necessarily say that it looks better than the first film as to me they basically seemed equivalent, but they’re both of really good quality which is the important part. Pixar doesn’t hold back here and the character models for the cars are good. As we finally got some action scenes here as well, we got to see how Pixar would handle them. I’d say that they worked out pretty well. On the technical side of things this film certainly aged pretty well.

Overall, Cars 2 is a decently fun sequel to the original Cars, but it is definitely not quite as good. You can certainly tell that they chopped the quality down a few notches for this one and I don’t know what they were thinking with Mater. If the main character had been Lightning and his plot was the focus then this film would have been a lot more fun. Even the ending keeps the film from going strong as Holley’s personality flies out the window as she likes Mater for no reason (Again, the film is giving Mater too much credit even though most of this situation is his fault) and Lightning doesn’t even beast Francesco in the end. Was a clear cut victory too bold for the writers to pull off? Those mistakes are definitely regrettable, but at the end of the day you should still enjoy this film. It’s a fun enough movie to watch and the pacing is good so it flies by. It has a good amount of replay value and at least I thought the set up and presentation for the big tournament was great. Whenever the subplot is happening, the film is at its height.