This review is of the edited TV-14 version of the film. All thoughts below should be addressed as such as a review of the unedited version would be even more negative 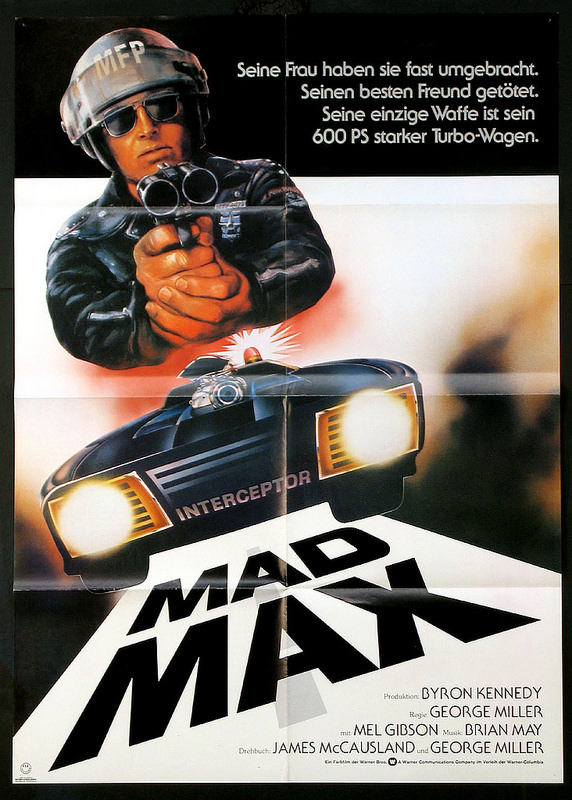 It’s time for one of those films that has always been known as one of the worst. It’s always an interesting experience to go into a film knowing that there is over a 95% chance that it’s going to be terrible. Well, Mad Max certainly lived up to the hype. There is no real plot and the writing is worse than an Adam Sandler film. There are no redeemable qualities for this film whatsoever and right away you can tell that this film is going to be a chore to get through. If this film was intending to be good then it failed miserably but if deep down its intention was to be known as the greatest mess of a film during its time, then perhaps it succeeded. Either way, I think we know what the score is going to be here.

The film starts off with the corrupt cops knocking each others cars over and getting steamrolled by two random crooks in a car. Nobody in this film knows how to drive and that point will keep on getting brought up over the course of the film. If the villains even so much as try to turn, then the heroes get knocked over because they can’t do the same. The cops nearly lose this round, but the villain randomly crashes and blows up. Now there is a biker gang on the loose who are trying to avenge the other villains and go around blowing up cops and murdering towns. Max, being the hero that he is, decides to run away and leave the rest of the cops to fend for themselves. He takes his family to an abandoned part of the forest where nobody can possibly help them and then runs off again. They’re murdered and now Max has to try and avenge them. Thing is, if he wasn’t even remotely intelligent prior to this..is he smart enough to finish off the job?

Where to start with this film? First off, the writers should clearly rethink their careers because the story is as nonsensical as it can be. There is no focus to the story as its just the bandits messing around with everyone. They might even have more screentime than the main lead and half of the time it’s just them acting obnoxious and yelling a lot. Nobody even makes any logical moves. Take Max for example. Since he was a cop, he knows all about the biker gang and how they target anyone they come across. This also seems to be common knowledge across the country in this alternate future. Why would he possibly leave his family alone once they made it to the woods? This area isn’t far from all of the biker gang attacks after all so he should have gone with them. Even once he meets up with the family, he deserts them again in the very next scene to check out the forest. Finally, when he is trying to murder all of the bikers, he falls into their very obvious trap. Maybe if the film was trying to portray him as an unintelligent person then it would be decent writing, but this is clearly not the intent. Nobody looks smart here and unless this is a film that’s actually taking place in the past and everyone’s a caveman, then it just doesn’t work.

The rest of the cops? Don’t worry about them since they never actually get a role in the film. Like I said, over half of the film is about the villains and the last 15-20 minutes are about Max’s payback. Nothing else that we see in the film is ever important and most of the scenes can be considered as filler. An important thing when constructing a universe is to make sure that everything makes sense. If you live in a society where there is no law and you’re in constant danger, then everyone should always have a gun at the ready. If driving fast is essential to staying alive, then you’d expect people to know how to drive right away. Yet, nobody actually acts like they live in the world that they’re set in. Characters act as if they’re in a normal world and are then surprised when they are constantly attacked.

Mad Max is also a very mean spirited film as you might expect. The villains have their way with everyone and the heroes always suffer very slow deaths or fates worse than death. This film is quite graphic and dark. There’s never any actual happy scenes so instead the film plays the happy tunes when the main character tortures and murders the villains. Definitely shows you what the writer was thinking while writing this. It’s definitely a film that is trying its best to be as edgy and over the top as possible. It definitely succeeds in that regard and with all the shock value thrown into the film I suppose it was never trying to have any sort of quality anyway. This is the kind of film that you can chuck into the can within minutes. I can’t imagine being in the theaters for a film like this. You’d be dashing to the front to get your refund so fast that you’d be a blur. The problem is that everyone else would have the same idea so it would still be tough.

At least the film has a soundtrack so I suppose I should see that as a silver lining, but since the sound director had no idea what he was doing, the music is placed in all of the wrong scenes. It never actually makes sense and I get the feeling that the person in charge of the music didn’t actually watch the movie. Smart idea actually so he’s probably the smartest guy on the team. I can’t really put too much blame on the guy as a result.

There’s not too much more to say and bash about Mad Max since you get the drift. If the characters are poorly written, the plot is nonexistent, the music isn’t placed correctly, the writing for the universe and everything in it is terrible and the script is terrible…what is left for the film? Even the scenery is rather bland as it’s just a bunch of roads and we don’t have any cool buildings. Everything is torn down and old, just like this film. You can get to snoozeville before you actually find something interesting about this film. If the writers couldn’t be bothered to make an actual story why would you even want to try to find one? There is nothing to be found here, only despair and decay.

Max Max’s main incentive for viewers is to see a revenge story. It’s supposed to be exhilarating because they make villains that are really mean and then you get to see the hero become just as mean as he destroys them all. It’s just such a poor way to try and create a plot. Revenge fantasies are just no good as the “hero” ends up becoming just like the villains in his mad quest for vengeance. Still, it’s a popular writing technique for writers who don’t know what else to do because it is extremely easy. Just have a bunch of tragic things happen that causes the hero to snap. You could come up with a plot like this in seconds and that’s likely what the creative staff here did. You could probably come up with a better plot and script in a few minutes than what we got in this film.

Overall, This film is definitely a disaster. It’s the kind of movie that you play to get everyone to shut off the TV and save electricity. There’s no enjoyment to be found here and you’d have a lot more fun just taking a nap or watching a show about paint drying. Sure, paint drying is the classic example, but at least it’s so much of a meme that it would still be a little entertaining as you just space out. I don’t have any real hopes for the sequels to be honest, but how much worse can they get? I know that a film can always get worse, but you do really have to try to be this level of bad. Next time you think of watching Mad Max, remember that nobody deserves to have to watch this film. That’s just how bad this movie is.