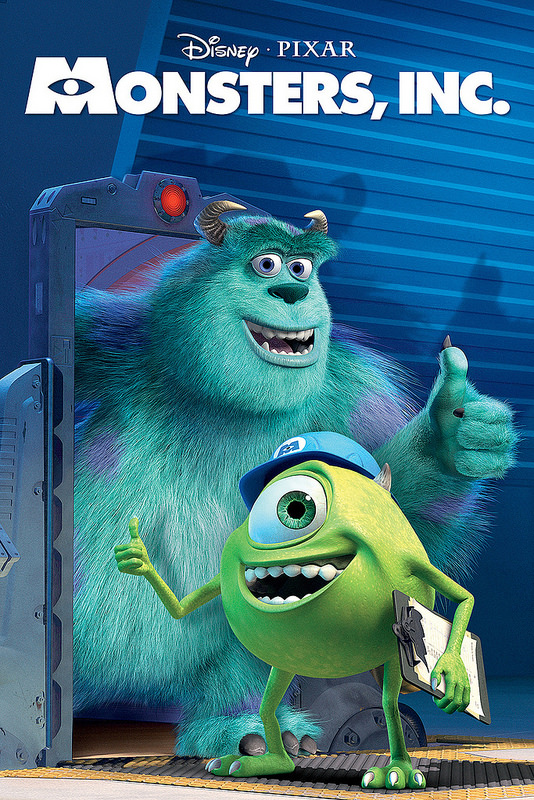 It’s time to look at a retro Pixar film. It’s been a long time since I’ve seen this one, possibly even over 10 years at this point. I enjoyed the Dodgeball game that they made for the Gamecube so it was about time that I gave the film a revisit. It’s definitely aged really well and I’d consider it to be one of Pixar’s better films. Actually, it’s been a while since I’ve done any kind of rankings for it so I’m going to have a list near the end. I’m not sure why this film needed a prequel when a sequel makes more sense, but that’s an adventure for another time. Lets dive into the plot.

There exists a world filled with monsters who sneak into kids’ rooms at night in order to scare them. This is because their world runs on scream energy so they scare the kids and then dash back. They have to be careful because if a kid makes contact with them they will die from the poison. As such they can’t even touch anything that has been in touch with a kid. Sully is the best Monster Scarer in the business and is getting ready to break another record. The big hitch in this plan is that a kid manages to sneak out of her door and grab onto Sully. He must now find a way to return her to the human world without anyone noticing. His reputation is at stake, but he quickly finds out that kids may not be as dangerous as he was told. Will he make the right decision and help her out or follow corporate and not ask any questions?

Pixar has definitely come up with another very interesting world here. Doors that lead you to other worlds really sounds like something out of Kingdom Hearts. A whole society being born out of it is also very interesting. There’s definitely a lot you could do with the concept. If only Watermoose had adapted to the plot twist that laughter works just as well, he could have really been raking in the money. It’s sad because he seems like a decent guy for the majority of the film. I suppose they usually do seem nice at first though. He shows his true colors by the end though and the cops had the last laugh. Still a fun antagonist though and he can fight which is pretty impressive.

The writing is pretty solid for the film and that quickly makes the main characters pretty likable. Monster, Inc. has good pacing as well so it never really drags on. The film goes by in a snap with no real weak points. Even the brief Yeti part of the film had the potential to drag on, but the characters didn’t stay there for very long so I’d say that it wasn’t bad. The door hopping shenanigans at the end of the film do raise some questions though. They would jump in one door and escape through another. This is because Boo powered up all of the doors, but then can’t Randall do the same? I mean, if he is still alive anyway. If he isn’t, then there was no reason to break the door either though. I guess it’s better to be safe than sorry though.

The animation is pretty consistent with Pixar’s usual style. The character designs for the monsters and the humans are classic at this point. We even get a quick fight scene which looks good even if you’ll wonder how Randall can be so much more skilled than Sully. You’d expect the main character to put up a better fight considering how much raw power he has right? I guess he just wasn’t ready for invisibility and I suppose it can take you by surprise. There isn’t much of a soundtrack here, but maybe next time.

Sully is a good main character. He never let the fame go to his head even when he was the fear champ. He looks out for his friends and while he didn’t plan for Boo to be around, he still takes her appearance in stride and then aims to protect her. He’s just a nice guy who always makes the right call. There’s nothing really bad to say about him. He has no real negative qualities unless you count his poor combat showing, but that really can’t be held against his personality.

Mike provides a nice contrast to Sully. He is interested in the records and getting onto the covers of various magazines. He has bad luck with a stamp always canceling out his face, but always looks on the bright side of things. He talks a good game and doesn’t really fear anyone. His only downside is the romance plot. It’s one of those romance plots that is rather small, but still cringe-worthy and doesn’t add anything to the film. It’s just there so the film can say that it had a romance plot, but we didn’t need one of those. Mike and Sully may bicker at times as they disagree on what to do with Boo, but at the end of the day they’ll always be friends.

Boo is the little kid who tags along with the crew and she can be rather annoying. She can’t talk and keeps on trying to get the heroes in trouble. Not a very nice thing to do if you ask me and she does seem to know what she is doing. Boo is young enough where it’s hard to pin the blame on her, but that’s why I still prefer for kids to not be main characters. She’s more of a plot device than a character here I suppose, but her only role is to make things tougher on the heroes. I’m guessing she’ll be a
better character in a sequel since she’ll be older and more experienced. At least she can fight though which is really good since self defense is a must.

While Watermoose is the head honcho of the villains, Randall is still the main antagonist. He really wants to be the scare king and will do anything to get the title. He gets rather drastic by the end and is willing to attack the heroes to get what he wants. Of course, his skills don’t matter much against full fledged adults as we see by the end of the film. He’s a solid villain who is nice to have in the film. Whether he is acting as a rival or a pure villain, he’s definitely a lot of fun. Randall is able to be charismatic while also being a threat.

There is a group of workers who try to keep the place sanitary and they are definitely some of the best characters in the film. One of them goes for a full body slam on an unsuspecting citizen. They are certainly over the top with their methods of keeping the germs at bay, but you can never be too safe. There will definitely be no contagion event in this film since they have the place under lock and key. They may not be appreciated by the monsters, but their duty and service is the only thing keeping monster world together.

All right, it’s time to take a rough look at how all the Pixar films stack up. Here we go! Cars, Cars 3, Inside Out, Incredibles, Monsters, Inc., Cars 2, Finding Nemo, Finding Dory, Up, Ratatouille. At the very least this is how I’d rank them at the moment. There are quite a few close ones in there but there can be no ties so I had to make the tough calls. We’ll see how Toy Story ranks once I finally check that one out. I’ve heard pretty good things about that series.

Overall, Monsters, Inc. is a good film that has definitely aged well. It’s the kind of movie that has quite a lot of replay value so you could watch it multiple times because of how fast it moves. It’s just a charming film with a lot of heart and an upbeat tone all the way through. The ending gives it a nice boost as well since it’s the perfect way to wrap things up. Ending another way would have just been needlessly sad. If you haven’t seen it yet then I’d definitely recommend giving this film a whirl. It’s a fun premise and doesn’t go too far in making the monsters appear cowardly either. The writing is solid enough to keep the film balanced. Hopefully the prequel is as good although it’ll certainly be tough.