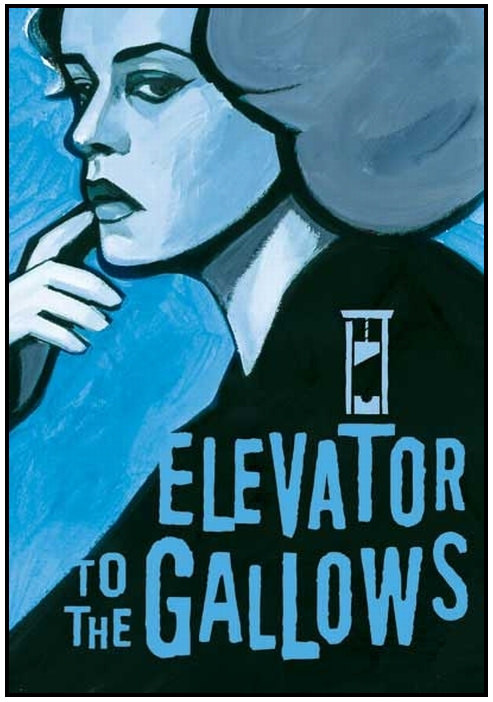 It’s time to take a look at a French murder thriller. It’s pretty rare that I see a film which isn’t American or Japanese so it’s always interesting to see how everyone else handles this. It’s a fairly old film as it’s still in the black and white period so as you’d expect the writing is on point. It is partially a romance film which can be rather dramatic, but the film’s at its best when an old guy shows up to mock the teenagers and their subplot. Time to learn more about this guy.

So the film starts off with Julien and Florence recommitting their resolve to murdering her husband so Julien can be the rebound guy. He breaks in and murders the husband pretty easily, but then forgets his rope at the window ledge. He runs back after hours to get it, but as soon as he gets on the elevator the power goes out. He is now stuck with no way to get out and his only hope is that Florence will learn where he is. Meanwhile his car is stolen by Louis and Veronique as they decide to cruise around town. Unfortunately, they decide to commit murder under his name which will further complicate matters. Julien has to trick the cops into not pinning the first murder on him while also avoiding the fake charge of the second. It’s going to be a long day.

From the start the movie makes it clear that the leads are the villains so you are rooting against them. As such, it’s actually pretty satisfying when the elevator crashes and things don’t go right for Julien. He dug his own grave and now he’ll have to get used to it. There’s not much that he can do from this point so you can’t really blame him for a lack of trying. He was the most experienced and talented member of the villains so taking him out of the equation worked well for the cops. He also held up well under interrogation, but eventually he cracked from lack of sleep. The cops always get their man.

You don’t really see this form of interrogation too often, but it is quite effective as getting the suspect to concede their guilt. Physically nothing actually happens to the suspect, but he/she is kept from sleeping until the cops get the story they want. After even 1 day of this it can be tough to function so even the great Julien fell to the technique. You have to be careful about getting a false conviction like this though, but I guess the cops decided it was worth the risk. It did work out well here after all.

Florence isn’t the greatest sidekick you could ask for. She further incriminates Julien by asking around for him everywhere. She was also fooled quite easily by Louis as she thought it was Julien who sped by her. I guess the jacket trick worked, but would Julien really betray her so easily? It may be poetic since she ditched her husband and now has some paranoia that Julien would do the same thing to her. She did a reasonable job of tracking down Louis and making threats, but then she didn’t do a thorough enough job of preventing them from leaving. That’s game over.

Louis is unfortunately the worst character in the film. He is over the top with his many lies which is the only reason he and Veronique were caught. If he had played it cool or even somewhat calmly then he could have escaped. Instead he gets humiliated by a drunk, rich guy and then tries to steal his car. Not a very smart move and then shooting the couple just made an even bigger mess. He even messed up on trying to destroy himself with pills since he didn’t swallow enough of them. So much for that. You’ll be cringing whenever he is on screen. Veronique is a big improvement as she is also insane, but hides it well. She pretends not to want to go along with Louis’ plans, but always relents in the end. She just wants to keep up the appearance of being a good person even if it may not be all that accurate.

My favorite character here was actually the rich guy who kept making fun of Louis. Making fun of the teen was reason enough to like him, but we also can’t forget that this guy saw through the ruse immediately. It’s too bad he underestimated how dangerous the villains were though. The scene of him and his friend getting shot was fairly tragic and probably the saddest scene in the film. I was hoping they were going to live through this since they were a lot of fun. Maybe not too smart in how they handled this, but fun all the same.

It’s good to see the cops looking pretty good here though. They connect the dots between the crimes pretty quickly and then set their plans into motion. Once they nab the suspects it is all over for them. At first you may wonder what is taking them so long, but it’s all just because they are setting their pieces in motion. Getting all of the pieces into play so to speak. It would have been fun to have seen the Jury sentencing, but I suppose the ending gives you a clear enough idea of how it’s going to go down anyway.

The pacing is pretty good. The only plot which probably drags on more than a little bit is Florence’s section. She goes through a great number of shops looking for Julien and after a while it is really just more of the same. You get the point of her search and we know that she stayed up all night so I think a few places could have been cut. The random drunk guy and his friend didn’t seem to serve much of a purpose, but maybe they were just there are red herrings or as world building. Either way, putting more screen time in the elevator plot could have been nice although I’m sure the film didn’t want to make that one feel stale. It’s a tough balancing act.

Overall, This is an interesting film. The ending is very satisfying and probably the best part. The atmosphere is pretty good, but you can’t help but feel bad for the last two victims. It’s hard to be too sympathetic to the first guy since it’s at the very beginning and he was fairly shady anyway, but the other two characters were too hype to be bumped off the way that they were. The romance is pretty bad, but that’s how it is for all rebounds and it goes without saying why Louis’plot was iffy. I’d recommend checking this film out as a retro classic. There are quite a few plot lines going through the movie and it’s nice to see how they all connect.