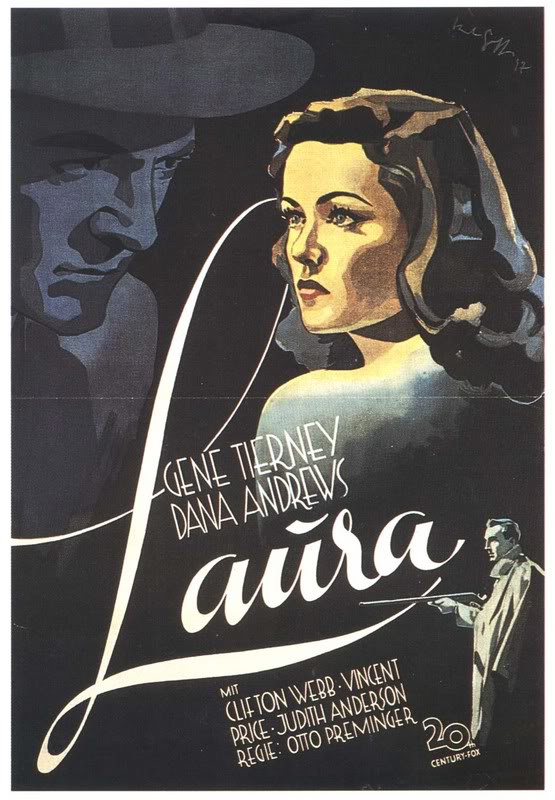 It’s time to look at a very retro mystery film. The cast is actually smaller than I thought it was as Wikipedia only lists 6 people in the film. Naturally, some of them may just not have been big enough to have their own section, but it goes to show that if the story is quick enough you won’t even notice this. It’s a solid movie that really does a good job of throwing in a lot of twists and turns without getting redundant. The cast is solid and this film really flies by. This review does have some big spoilers depending on what you count. It’s a big plot point that happens around halfway through the film so it’s pretty debatable.

The basic premise of the film is that a lady by the name of Laura has been murdered. She went up against a shotgun and didn’t exactly win the encounter. A private eye known as Mark shows up to get to the bottom of this. Waldo wants justice because Laura was a close business associate of his and he had been helping her rise up the business ranks until this happened. Mark continues his investigation which leads him to Shelby, a rather suspicious man who has many affairs and always seems to be after people with money. This mystery will be a piece of cake for this baseball master, but unfortunately Mark starts to realize that this case is quite personal. Can he put his feelings aside or has he always been on a path to destruction?

Ironically, the weakest character here may be Mark. Shelby is certainly more unlikable as he’s just a bad guy, but it’s incredibly difficult to sympathize with Mark’s plight. How can you possibly start to fall for a picture? If someone’s dead, they’re not exactly going to make for a very attractive prospect. What the film should have done was just doubled down on his tough demeanor to show that this guy was one detective who wouldn’t get pushed around by anyone. He would solve this case no matter how tough it got. By making him distracted it took away from his whole character. I did like his Baseball gimmick though. Right when he started taking out the game I knew that it would be the best part of his character.

At least the detective doesn’t look downright bad for the most part. His only unfortunate moment was at the very end of the film where he assures Laura that she will be safe and then runs out of the building so fast that you’ll think he’s a blur. This gives the culprit plenty of time to waltz in and finish the job. Laura is just lucky that the villain is such a poor shot or else this could have been the end.

Wait, why is Laura even being mentioned? Well, that’s one of the big plot points of the film. Laura isn’t actually dead and merely went to the forest for a while. Since these were the days before radio and internet nobody actually knew where she was and when they went to the house she had stepped out for a moment. Definitely some interesting logic there, but I can buy it to an extent as there wasn’t much else to do back in the day aside from walking so she may have just been adventuring all day. Laura isn’t a very likable character as she does lead everyone on and doesn’t even mind playing second fiddle after a while. It gets rather complicated, but she knows from the start that Shelby can’t be trusted and also allows Waldo to treat her to many meals. They may be platonic friends, but then she should pay the bill, otherwise things get dicey. She just seems rather easy and Mark should be careful what he’s getting himself into. Her web of deceit will continue to stretch farther and farther.

As for Waldo, he’s certainly the most amusing character in the film. He’s always got a snappy comeback at the ready and certainly doesn’t get intimidated by anyone. To think that he started out as a rather snobbish businessman before he got involved with Laura and changed quite a bit. You can’t deny that the guy does his homework though. He didn’t even need to make up lies about the people Laura hung out with, he just dug up the dirt that they left around the house. They made his job easy, but he always went the extra mile. Naturally a person this obsessive tends to be fairly dangerous in films like these but if the detective is going to make a move he better be careful about it.

Finally there is Shelby. It’s certainly different to see Vincent Price in a young role for a change. The character is fairly quick witted, but can never quite keep up with Waldo. He does make for a good rival though. He’s not exactly a man of principles, but isn’t ashamed to admit as much. Everyone knows what kind of a guy he is, but they don’t care because of his charisma. It’s definitely a credit to his character that he is able to deceive people so easily and he makes for a solid antagonist.

The only weak aspect of this film is naturally the romance. It’s just not handled very well at all. Laura basically plays everyone and they all fall for the game quite easily. It would have been nice if the same had been true for them and at the end they all admitted to just manipulating the others for personal gain. That’s practically what the situation was for most of them anyway. A film like this one should have everyone stay purely platonic as that would certainly add to the suspense and make the characters look a little tougher and more savvy on how things usually play out here.

Still, the writing was certainly great beyond that. The film did a good job of making everyone seem suspicious at times and having all of the characters stay on guard. The banter between all of the characters was on point as you would expect it to be. Dialogue is crucial for a noir film like this one and I’m happy to say that it did indeed deliver. It’s why its so hard to do a film like this one nowadays. The writing just isn’t up to par with the good ole days and it’s very rare that a film proves me wrong. There were just higher standards in the past and that’s why there were so many well written films like this one hiding in the cracks of time.

Overall, Laura is a really fun film. It’s a murder mystery that still has quite a bit of humor and solid pacing to go along with it. The romance is rather weak, but what else is new right? The twist of Laura being alive could have been rather disastrous if handled wrong, but since it rarely tends to happen the twist worked really well. I can definitely recommend this film to anyone who likes a little suspense and danger. There’s never a dull moment in this film so you’ll end up being on guard from start to finish. In a film like this one, you really can’t trust anyone.