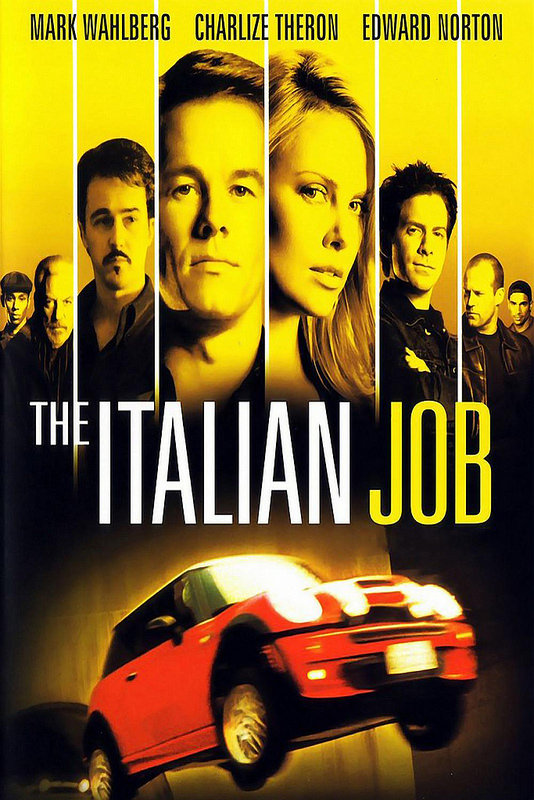 The Italian Job is one of those movies that you are unlikely to have heard of despite being familiar with the heist genre. It even has some big actors but I still don’t remember it making any headlines. I guess it probably just came out at a tough year. Still, it’s a pretty solid film that may not be amazing but manages to avoid making any really serious mistakes which is important.

The film starts with a group of burgers pulling off a pretty big heist where they had to race the cops in a boat and got to walk away with millions. Unfortunately just as one of the characters was finally going to retire, the group was betrayed by Steve who decided to keep the money for himself. He shots the best crook, drowns the others, and then runs off. Years have passed and now the burglars want their revenge and also hope to secure the money in the process. They managed to survive with their wit and have stayed under the radar for a long time. It has all been for this one moment but to make sure that this mission is a success they will need to bring in a secret weapon, the daughter of the dead burglar.

You will have to turn your suspension of disbelief on full blast right away here as the plans are so detailed and convoluted that you probably won’t be able to accept what is happening with a straight face otherwise. In the climax of the film the villain gets a helicopter and even a private militia as he drives through town but the main character, Charlie is able to hold his own on a quick motorcycle. His team of quirky hackers seem more than capable of taking any villain down after this film.

Where the film really did a good job was with the fast moving plot. A lot of things were always happening. The talking scenes are pretty engaging and I do tend to enjoy the planning. The execution is also on point and it’s just a solid film from start to finish. The ending was also really good. One thing that tends to happen in a film like this is that the heroes will win it, but the villains end up destroying all of the informants along the way thereby preventing anyone else from ever replicating the feat. I was worried for “Tiny” or “Slim” (I forgot which one was his name) when the villains showed up at his door. Fortunately it turned out all right for the guy and in the end everything worked out. It’s also rare for a villain to not get away with murdering random Jim #34 but in this case it’s one of the main things that comes back to bite him. Turns out that this guy was friends with the mafia and you don’t mess with those guys.

The cast of characters was also surprisingly good which is always important. Charlie is a great tactician which is shown from the start. He may not be infallible but is able to adjust his plan at a second’s notice to fix any oversights. Even by the end he was one step ahead of Steve and never found himself at the back. Steve is also pretty solid as he always talks with a lot of confidence and has a smug air about him. Definitely not a guy who gives up easy and even if he isn’t as smart as the main character he isn’t half bad at making plans. Against someone else he may have stood a chance. Of course, he definitely should have sold the gold by the time the heroes found him though and shooting the merchant just delayed this even further. Not the smartest villain around even if he is fun.

Stella is solid as well. Initially I forgot about her first appearance and for a second thought that the film was bringing in a new character. The opening does certainly make more sense in light of this. Unfortunately, her character is used for fanservice quite a bit as we have the unfortunate trope of someone walking into her room while she is still getting changed. Likewise, Stella’s entire first scene seems to be focused on her attire more than the actual dialogue. Once we get past these moments this fortunately stops happening. Stella is a solid locksmith even if she is not quite at the same level as her father yet. She can also drive with the best of them. I think her character could have been handled better but overall she was a good character.

Another one of the thieves was the Napster. This guy spends most of his time complaining about how Steve stole his inventions. He takes this the least seriously compared to the rest of the team and nearly blows there cover several times by pulling pranks on the cops and the government. So much for being discreet right? I suppose he has his own priorities so you can’t really argue with that. He’s definitely a pretty bad character though. There is also Gilligan who does his best to mess up everyone’s chances as well. When it comes time to broker a deal with someone who has the supplies they need, he can’t help but stare at the guy constantly even when he is told not too. Actually, as far as the great character cast maybe I should be more specific. Steve, Charlie, Stella, and the father from the very beginning are solid characters. Everyone else definitely has a lot of room for improvement if you ask me. Still, since the characters with the most screen time are at the top that’s what counts.

We also get a long car chase scene that I referenced earlier and works well as the climax. Who doesn’t like a good car chase right? After a while they may all start to seem like the same race if you watch enough films, but that doesn’t take away from the fact that they work quite well as a satisfying way to end the film. It’s not as if we could have had a real hand to hand fight at the end as you would have then had to ask where they learned how to fight. A battle of two self taught fighters could be fun, but I don’t believe Steve ever would have bothered learning how to fight while Charlie showed earlier that he could throw a good punch.

Overall, The Italian Job is a pretty fun heist film. The pacing is always on point and the characters make for some pretty enjoyable banter. Some of the plans may seem like a stretch at times but that goes hand in hand with the genre. If you like watching a game of mental chess going on with plans and counter plans then I’d recommend checking this film out. It’ll keep you entertained the whole way through and never really make any mistake big enough to get you out of the action. It’s satisfied with just being an entertaining film and that’s a pretty solid approach if you ask me.

4 thoughts on “The Italian Job Review”