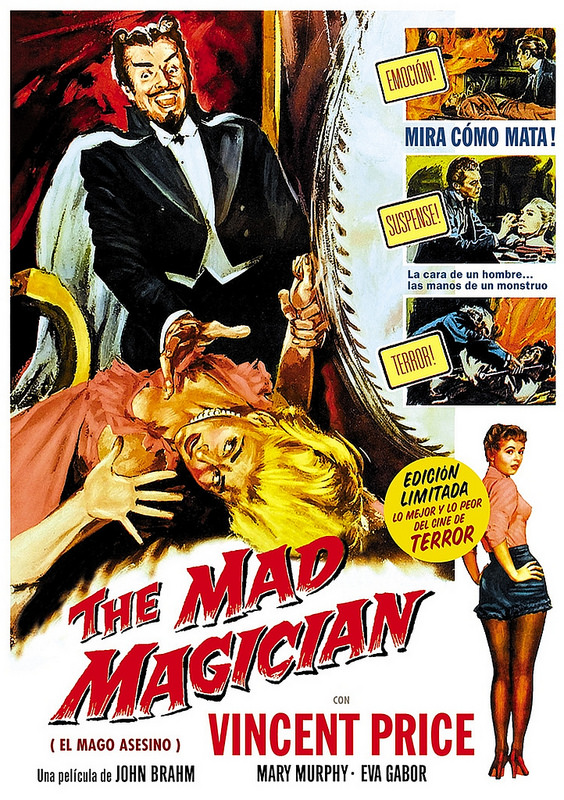 It’s time to look at the Mad Magician, a Vincent Price film that plays it by the numbers for better or worse. The instant you see him show up you know that things are going to be tragic for his character and that he will turn to a life a crime. This film does handle itself fairly well though and may be one of the better Price films. Most of the characters are not very smart as you would expect though.

The film starts off with Mr. Gallico getting ready to perform his first ever show. For years he has built the magic tricks behind the scenes that have allowed others to get famous. Well, this will happen no more! Gallico is determined to show that he can be a great showman too. Unfortunately his boss shuts the show down and informs Gallico that he will never be allowed to take any credit for as long as he lives. Gallico decides that this is acceptable and so begins his murder spree as he tries to stay off the radar but more and more people start realizing that he is guilty. Can Gallico ever find peace?

Naturally Gallico does dig his own grave with the first murder. Honestly he was doomed as soon as he let the heroine get away with the head during the opening scenes as it certainly did make him look suspicious. Otherwise he could have just not murdered anybody and could have acted innocent the whole time. This didn’t quite pan out but it shows how an early mistake can really have an impact.

At least you can feel a little sympathy for Gallico unlike the average villain. It’s always a shame when corporate takes someone hostage thanks to the contract. Apparently this one was unbreakable and basically the company owns Gallico for life. It’s definitely an extreme contract and I’m sure that Gallico is wishing that he had read the contract a little better now. As always Price makes his characters pretty interesting to watch as his voice is very charismatic. You always get the feeling that the character is up to something. He certainly was a great inventor here, just a mad one.

The supporting cast here was better than usual. First up is the cop who won’t take no for an answer. Alan certainly goes through a lot of work trying to prove his fingerprint theory. That being said, he is unfortunately very weak and not very smart. Even after Alan breaks into Gallico’s office and knows with a decent amount of confidence that the man is guilty, he allows himself to be caught by surprise. He goes down quite easily to Gallico’s impressive karate chops. So I can give the cop some props for his deductive skills and being pretty pro active but the climax didn’t help him all that much.

There is also the murder author who allows Gallico to stay over while he is disguised as his boss who he murdered. This buys him some time but certainly doesn’t help in the long run as she is very perceptive and has come up with some plots that involved a lot of murders. There is one odd scene where she almost seems nervous about Gallico’s crematorium but by then she may have started to piece the puzzle together so it makes sense. Unfortunately she also looks a little weak in the climax. While Gallico is beating the cop like a drum, the author and the main heroine don’t lift a finger to help and instead run to the window to yell for help. A little assistance would have been nice and they would have outnumbered Gallico 3-1 so I would have liked their odds.

As far as the meaner characters are concerned, Gallico’s boss was a fun character to watch. He was rather extreme the whole time but at least he acted with confidence. His end was certainly inevitable though. Likewise, Rinaldi was also doomed as he kept trying to rub it in to Gallico that the inventor would never be allowed to star in he show. Once he found out that Gallico had been murdering people you would have assumed that he would play it cautiously right? Instead he goes back to the house to brag when the two of them are all alone and doesn’t notice that Gallico has locked the door. At that point you knew that he didn’t stand a chance. The same goes for the ex wife of Gallico who left him for money. She doesn’t try to blackmail him for anything but seems like he type of character who would at some point. She also took a little too long to realize how dangerous he was.

As far as the deaths go, the film is fairly tame. Only the first death is rather violent and it is off screen so it’s really just the implied violence that makes the scene intense. The other deaths are totally off screen. The writing is pretty solid as you would expect from an old school film like this one. All of the characters are very confident and self assured as they talk with smug expressions on their faces. That’s why the characters can be charismatic whether they are heroes or villains.

The whole idea of using a realistic mask to make yourself appear to be someone else definitely is a bit of a stretch but I suppose none of the characters knew the magicians too well. Those who did were able to quickly see through the disguise so there is that. I think Gallico probably made a mistake in not giving his hand prints right away while disguised as Rinaldi. This is really what made the cops suspicious of him. If he had given his prints and they were seen to be the same as the guy who died, then perhaps the cops would have been forced to have forgotten about the finger print idea entirely. It was a gamble either way though, Gallico put himself in a bad spot.

Overall, The Mad Magician is a fun film that will keep you entertained. It may be part horror, but the film feels like it attempts to have quite a few moments of comedy that work well. Basically this involves any scene where Gallico is slowly walking towards his prey. The villains eventually drive Gallico mad but but at least he doesn’t start randomly taking it out on everyone and mainly sticks to his goals. The film doesn’t try to be extra gritty or anything and the pacing is pretty good all the way through. I’d recommend checking this film out and it’ll serve as a good reminder that signing a contract with corporate is always a risky endeavor at best.