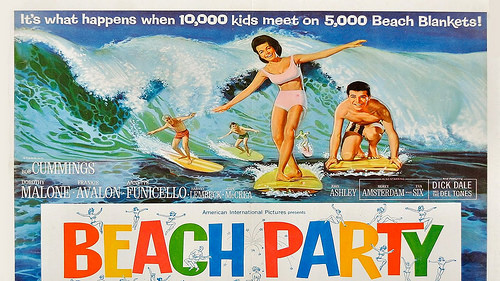 It’s time to look at another old school beach movie. This one’s title is pretty well suited for the movie since that’s really the extent of the plot. The heroes are going to have a big party on the beach so cue the hijinx and shenanigans. It’s definitely not a film for the faint of heart or for those who like to watch quality films. If you like the beach genre though then I think it’s fair to say that you will like this film. After all, that’s what this one is all about!

The main characters are Frankie and Dolores. They have decided to head over to an abandoned beach house so they can finally hang out without the rest of the gang. The two of them like their friends of course, but sometimes it’s best to just get away from all of them. At least that’s what Frankie had in mind, but then Dolores admits that she actually didn’t like that plan so she invited everyone to the house. Frankie gets upset and after Dolores gives him the silent treatment he decides to get even. He’ll get together with Ava to upset her and in retaliation she gets together with an old guy named Robert. Both of them have to push this as far as they can until the other relents, but who will crack first?

The plot of trying to get the other person jealous is always a classic for the romance genre, but it’s still not a good plot. While they are using these other people the main characters are also degrading themselves. Frankie does let Ava have her way with him even though he puts up some mild resistance. You can tell that he is rather half hearted about it. Likewise Dolores is quite extreme with Robert and seems willing to do anything. It’s only thanks to Robert continuing to refuse her that things don’t go too far. These actions don’t make the two leads look very good at all.

It probably works more on Frankie than vice versa. He gets upset enough to go and threaten Robert a few times although that never actually goes anywhere. Frankie always appears to want Dolores back (but not enough to apologize) while she is content with Robert. Again, that plot only ended because Robert actually broke up with her instead of the other way around. That’s why you will actually feel bad for Ava by the end of the movie. She was just fine by herself until Frankie decided to claim her and then he just dumped her when her use was at an end. She really got a sour deal but fortunately she didn’t take it too hard.

As for Robert, I’m afraid that he was a bad character from the very beginning. He is writing a book on the teens which essentially involves spying on them 24/7 while laughing like a maniac the whole time. Having a romance with one of them is naturally just as cringe worthy. This character definitely didn’t need to be in the film and I think it’s safe to say that he is nowhere near the villains from the previous beach film that I saw. The only thing interesting about him as a character is that he is a master martial artist. He can actually bend time to his will using a technique that freezes a person in time for hours. That’s extremely useful if you think about it.

Then we’ve also got Eric Zipper and his gang as per usual. They still get beat up by every character who encounters them, but I suppose they try their best with their sound effects and over the top reactions. I’d say that you would root for them after a while, but that’s definitely not going to happen. Lets just say that they weren’t ready for Robert. The scene where Robert first confronts them may be the best scene in the film.

As you would expect the romance in this film is terrible. The characters all seem to be fans of rebound maneuvers as they switch partners very quickly. The characters can get betrayed multiple times and overlook it quite quickly. Robert’s partner pretends not to like him, but then gets jealous when he partners up with someone and doesn’t mind being the 2nd choice at the end. The characters must just have very low self esteem to not mind all of this. None of the characters know what it means to slow down either as they jump right into the romance as soon as possible. Definitely makes you double think if being with one of them is the right move since you can’t trust any of the characters here.

Then we’ve also got the Beach scenery which doesn’t do the film any favors. It always goes for poor camera angles to add as much fanservice to the film as possible. It’s something that you don’t see too much in live action which shows you just how low this genre will go. I’d say that I expected better from the Beach genre, but honestly this is what you would expect from beach movies. Typically beach scenes in any film or show are some of the worst so a whole film taking place there just isn’t a good idea. The film just hasn’t aged well. Especially Dolores’ song where she basically admits that she should concede defeat first even though Frankie has just as much to do with the issue. Maybe more if you think about it since he certainly gets away with more than she does.

Overall, Beach Party is a film to avoid. None of the characters are good and the romance is terrible. There aren’t many redeemable scenes in this film and any scene that is around gets surrounded by bad ones. You need to stay as far away from this film as possible, but fortunately the title probably tipped you off to that from the beginning. The Beach genre is one that definitely deserved to be taken down a few pegs. Imagine seeing this in theaters? That’d be totally crazy. I’m ready for a Winter Mountain film genre to take off instead. I think that would be a lot better.