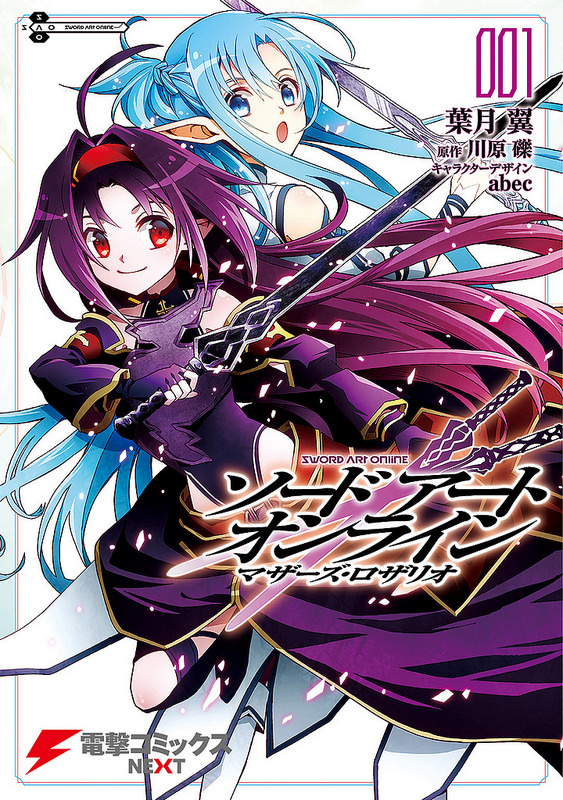 Time to look at another Sword Art Online manga. The last one didn’t go very well so of course you may be a little skeptical about this one. Fortunately this is adapting one of the better arcs of the series and the manga didn’t try to add any iffy scenes to mess with it. It’s a solid arc but also one of the more somber ones so prepare yourself for an SAO story like no other.

The series starts with Kirito and the crew hanging out at his (and Asuna’s) cabin. Kirito fell asleep of course and everyone else starts feeling sleepy as well. To stay awake, Lizbeth tells Asuna about a new swordsman who has been destroying opponents left and right. He goes by the name “Absolute Sword” and seems to be the strongest fighter ever. Even Kirito was (yeah right) soundly defeated by him. Asuna decides that she wants a crack at this fighter and heads over to fight him. The big twist is that Absolute Sword is a girl with the same first name as Asuna’s last name. Asuna puts up a good fight so Yuuki asks for her help in defeating a boss with Yuuki’s crew. Asuna is thrilled at the opportunity but will she be strong enough?

Meanwhile Asuna has human world troubles as well. Her Mother wants her to go to a different school since the current one is rather lackluster. Asuna doesn’t want this because she has already decided to support Kirito in her future path. Naturally this is very upsetting for the Mother since that doesn’t really even count as a career path. Asuna’s video game hobby has also started to turn into an obsession as she loses track of the time and starts to prefer being there than in the real world. Asuna’s Mom has to put an end to this, but how?

I already went into this for the anime version but I’ll quickly touch on the plot here as well. Asuna’s Mom is absolutely right here. The only chink in her argument of always looking out for Asuna is that she has set her up with potential marriage options one or two times. This seemingly goes against the rest of her message about being independent. Still, she has no problem with dropping that tactic when Asuna brings it up and I’m inclined to believe that Asuna had never expressed her disapproval for it before. Asuna seems like someone who won’t mention any objections to something in the moment and will just use it as ammo in the future which is definitely no good. Beyond that, Asuna is the one who is losing every argument. She could have brought up valid reasons for wanting to stay at a sub standard school but I wouldn’t say that hanging out with friends is one of them. The Mom was also willing to let her keep using the NerveGear but then Asuna started getting increasingly irresponsible with it so of course the Mom wouldn’t be a fan. So in the end, Asuna’s plot is definitely not as engaging as the Yuuki one.

As for Yuuki, she’s a fun character to add to the mix. It is good to finally have another high level fighter who can battle at Kirito’s level. At this point there really aren’t any heroes who can give him a good fight. At best Asuna can maybe be good for sparring practice, but with Yuuki Kirito can’t afford to hold back. Wanting to win one last big battle before going away is definitely a solid goal and one that I can get behind. The rest of her crew are fairly generic and not very memorable so I can’t say quite as much in their favor, but ultimately Yuuki is the only one who matters. They are just there to fill in the ranks. It’s a shame Yuuki doesn’t stick around since she would really give the main cast a boost.

Kirito mostly gets the shaft in this trilogy since it is all about Asuna and her development, but he still gets his share of hype moments. One such scene is when he rushes into the boss area and holds off hundreds of other players on his own. It’s an amazing scene that was extremely intense in all 3 mediums. (Book, Anime, Manga) It may not be Kirito’s adventure, but at the same time I am not surprised that he got the best scene in the adventure. His fight against Yuuki was a lot of fun as well of course and the series did a good job of playing up how smart Kirito was as well. He figured out Yuuki’s secret immediately and then even found out where she was in the real world all in a very short amount of time. It is almost scary just how good he is. 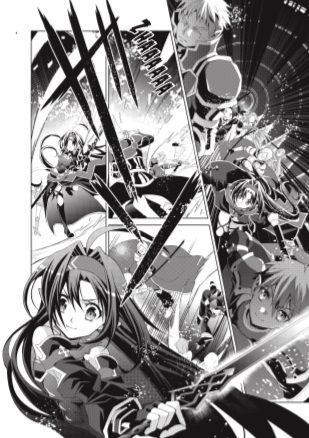 As for Asuna, she is fairly good here. I never disliked Asuna before this as she was solid in Arc 1, didn’t do much in arcs 2-3, so she was about the same now as she was in the past. She had lost some confidence as you might expect thanks to recent events, but regains it by the end of this adventure. She is still a strong fighter and I have to agree with the peanut gallery that it was odd how Asuna went for a mage role instead of a front line fighter. It seems like she enjoys the latter a whole lot more. Yuuki gave Asuna a valuable lesson on how being polite and talking things out won’t always work so sometimes you have to just jump in and start fighting. The sky’s the limit from there.

The art looks fairly good here. It’s the character designs that are a little off. In particular Kirito and Asuna look a little chibi or maybe just younger than usual. Aside from that, the artist does a good job with the fight scenes and it doesn’t look like a cash in. The trilogy has quite a few different fights and they are all visually engaging. Unfortunately while the trilogy does manage to stick away from fanservice, we do get one such bath scene as even on its best day it appears that the series can’t play it straight here.

There’s not a whole lot to say here since this is basically identical to the anime version so in a sense I already reviewed this saga. As long as the medium did it justice then there is no reason why it would be weaker than the anime version. If anything the pacing is better here since you can read faster than characters can talk so the exposition goes by at a nice pace. We already understand that Yuuki’s situation is rather tragic so you don’t need to know a whole lot about it beyond that. It will be nice to see Asuna use the new combo that Yuuki gave her in one of the anime seasons someday. We have the movie, but that wasn’t exactly a one on one fight and I’d like to see it in more of a traditional combat setting. 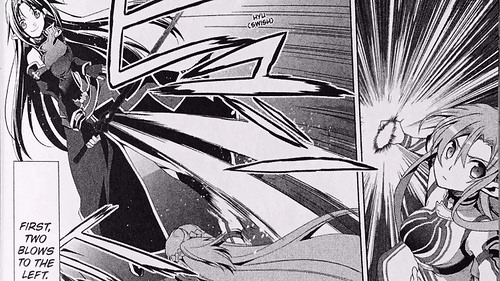 Overall, Mother’s Rosario is definitely the most serious of the SAO arcs. It’s certainly pretty sad to have a character who is doomed to die from the start since there’s no way that could end up being a happy ending. At least the series never tries to give you any false hope that she might survive as that would have made everything turn out badly. As it stands, Yuuki’s backstory is definitely very tragic but at least the trilogy handles it well. The series is actually light hearted for about 80% of the chapters and Yuuki isn’t too mopey about her future either. She takes it all in stride. I’d recommend checking out this manga, especially if you usually don’t like the series since this one takes it in a very different direction.