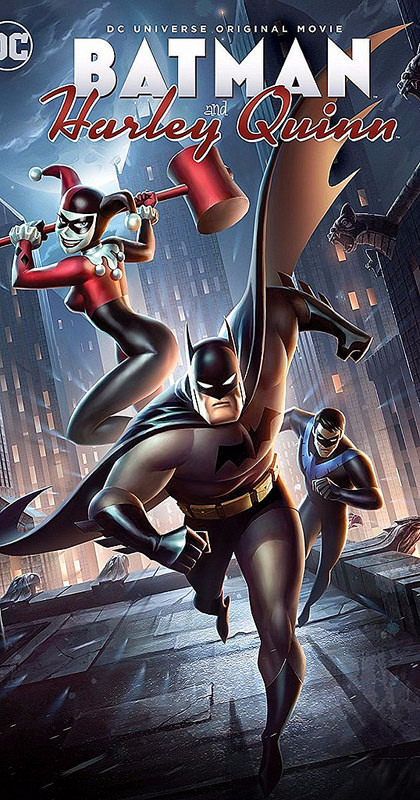 It’s time to look at a fairly recent DC film. The DCAU was one of the best things to ever happen to comics in general so it’s good to see it make a comeback with this film. Unfortunately its comeback is on a rather low note here as the film makes too many mistakes but if this leads to a new Justice League installment or maybe even a Superman film then I’ll be up for it. It definitely got a good retro vibe going for it.

The film starts off with Poison Ivy and the Floronic Man deciding to form an alliance and turn the world into plants. Batman and Nightwing figure that they won’t be able stop this threat on their own so they enlist the help of Harley Quinn. She agrees to help but is determined to make the heroes regret bringing her along. Will this team be able to keep it together long enough to save the world or do they just need to hope that the villains make a mistake somewhere along the line? The time is ticking!

One thing you’ll notice right away is that the film does a good job of recreating the classic sound effects from the DCAU. One thing that always stood out back then was how hard each blow sounded. Every movement had power behind it and it’s likely also due to the animation style. This film recreated it quite well and then throwing in the familiar voices made the experience even more authentic. On a technical level the film certainly didn’t disappoint. The hand to hand fights are also quite solid like Nightwing vs Harley Quinn and Poison Ivy vs Harley. Both fights were nice and long. It does bring up a mild question though of how Poison Ivy is so good at martial arts. I can understand Harley being really good, although I think she should not be able to do so well against Nightwing, but then how can Poison Ivy hold her own against such an opponent? It seems like everyone is apparently a martial arts master at this point.

Batman is a solid main character as always. While I think he was rather quick to throw in the towel by asking Harley to come along I guess time was of the essence here. The villains plan was actually pretty quick and well thought out for a change. It’s certainly a fairly unique threat. Batman is also upfront with the constant insults to the government so it’s nice to see that he is still feared by villains and heroes alike. I mean, the henchmen at the bar didn’t fear him, but they were quickly taught that lesson afterwards.

Lets talk about where the film went wrong now. For starters, it definitely is trying quite a bit to be edgier than the old days. Not in a cool well written way like Batman V Superman as that’s dark, but not edgy. Here we have Harley Quinn throwing in swear words just to remind us that she’s one of the villains from time to time. The script never gets too crazy, but each moment feels forced. Then we have random comments thrown in to show us that everyone is rather terrible in Gotham. The government agent guy is cheating for some reason and the normal citizens are all James Bond and Captain Kirk types.

The film also includes quite a bit of fanservice with Harley Quinn. As with Suicide Squad all it does it help defeat the point of trying to make her a strong character. The scene with her and Nightwing takes the cake of being the worst scene in the film though. It’s no surprise to see Harley Quinn back on the rebound, but Nightwing should have had the will power to stay true to the mission and refuse her. He looked terrible in that scene and this leads to a lot of painful lines later on as it keeps being brought up. On second thought, the writing was actually rather bad in this film. We even get crude humor thrown in.

So, Batman is the only good hero in this film. Nightwing was completely destroyed by this scene and just couldn’t make it back up the charts. There’s no way to take him seriously by this point. Then Harley Quinn is also beyond saving because her character is just no good. It’s great that she doesn’t want to be a villain anymore and she tries to earn sympathy points by showing how rough it is for an ex-con in Gotham, but she certainly doesn’t make it any easier on herself. She gets a happy ending at least so hopefully she doesn’t mess it up this time.

The villains are a lot more interesting and they’re better handled. The Floronic Man is the completely evil member of the duo and he can’t wait to destroy the humans. He’s a villain who has never gotten the spotlight before so it was cool to see him here. The guy seems like a reasonable villain. He may not be much of a threat, but can still put up a fairly good fight. Then we have Poison Ivy who was always good in the DCAU. She isn’t as insane as the average villain and ultimately at least has a good reason for being evil. I do think it was a bit iffy how Floronic Man was basically the leader of their partnership though since he is basically made out of plants. I think Ivy should be able to defeat him rather easily, but of course walking within punching distance wouldn’t be wise. These two villains are probably the 2nd and 3rd best characters in the film.

There isn’t much of a soundtrack, but we hear a really solid remix near the end of the film and overall it was rather fast paced. I wasn’t crazy about the lyrical songs though so I guess they roughly cancel out in the end. This film isn’t too long and the pacing is good so at least it doesn’t end up dragging on. I do have to question why the film plays up a certain death near the end like it’s a big deal though. It was a character that nobody cared about and it’s not as if he died in a particularly brutal way or anything. I guess the heroes are heroic enough to care though so I can’t fault them for that.

Overall, Batman and Harley Quinn wasn’t a good movie but I think anyone probably could have guessed that based on the title. Whenever there is a film based around Harley Quinn you know that it’s not going to work out very well. This film pretty much made every mistake that it could here. At least it wasn’t all that violent so it dodged that. Still, excessive fanservice and bad writing is enough to bring a film down. Also the quick case of animal violence as a mouse blows up. That scene is so incredibly unnecessary that you have to wonder what the film was thinking. I would recommend passing on this film as there are plenty of other, better DC films to watch instead.