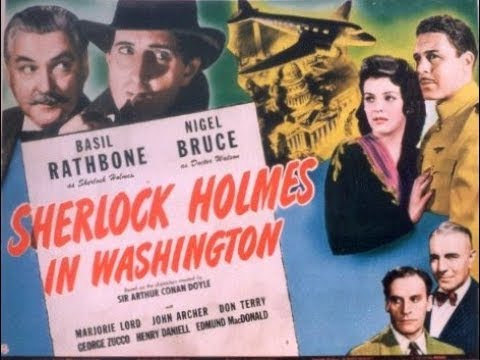 It’s time to look at the next Sherlock Holmes film. This time he gets to take in the sights of America so that’s always cool. The movie made a point to show New York so I like to think that this was foreshadowing for a future film. That would definitely be a lot of fun. The Sherlock Holmes film series seems to be pretty consistent so far which is certainly a good thing. It’s an enjoyable film although one that also seems a tad darker than the last few Holmes titles as the heroes struggle to really protect anyone.

The film starts off with London sending in two agents to head to Washington in order to give a sensitive document to the Americans. Naturally they decided to be quite clever about this and so they didn’t bring any bodyguards in. Big mistake if you ask me. Well, there was a mole within the London ranks as always so they figure out which agent is actually holding the documents and murder him. Fortunately the agent saw that his end was at hand and gave the documents to another lady aboard the train without her even realizing it. Now Sherlock Holmes must find this lady before the villains do, but his opponent is fairly smart himself.

I always have to wonder why people would just casually go with the villains to their car. Lets be honest with ourselves, if a group of guys with guns ask you to come with them, it’s not going to end well. At the very least they will almost certainly murder you. The reason you are going with them in the first place is because you are worried that they will shoot you otherwise, but your fate will be the same either way so you may as well make a scene. They won’t have much time to mess with you in this situation so they’ll be forced to shoot you right there and then. A far less painful death than otherwise. Alas, characters in these films never quite understand this.

Sherlock Holmes looks very smart as always. He is definitely one step ahead of the villains most of the time. Once in a while he will trip up and make a questionable move like hiding behind the soda, but since he didn’t know where the secret door was it’s not something you can blame him on too much. He did call in for backup as well which was definitely a good move. I also like how Holmes makes sure to rub it in against the villains on how he was right. He may as well since they’re gonna be locked up for a very long time and this is his only chance to make them feel even worse about it. No sympathy for these murderers.

Watson unfortunately looks worse than usual here. I dare say that this was probably his worst appearance from any of the Holmes films and that is really saying something. I don’t know what was up with this, but he kept trying to talk about sports and such while everyone else was talking about the implications this kidnapping could have on the war. In the other films Watson may not have always realized the gravity of the situation right away, but he wouldn’t joke around about it either. It was a little forced, but at least Watson still destroyed one of the villains so he was still useful.

The supporting cast don’t get to do much. We have the American cop who tries to talk tough, but his team can’t seem to do anything right. They were holding the train car as evidence yet the place was broken into by the villains without them even realizing. I don’t see how this was possible unless the Americans actually didn’t think to guard the main exhibition of an active murder case. Not their best moment.

As for the main villain, he is all right. Definitely a big step down from Moriarty, but I’d say that he is better than the average crook. The film did make sure to point out several times that he is very intelligent and even Holmes knew of his reputation. That also speaks to how smart the dead agent was since his microfilm strategy was air tight enough that a villainous genius couldn’t guess it. Even Holmes would not have been able to reach this conclusion without consulting the witnesses of the event.

There is one part to this mystery that was a little too convenient though. At the very beginning the villains pull off the kidnapping by turning off the lights, knocking the guy out, and then kidnapping him into a car on the train until it departed. From there they forced him into pretending that he was with them. (Still should have ran once they were outside) How did the employees not know that the culprits were the guys who turned the lights off? I don’t really see how the villains pulled this off without completely tipping their hand. It would also be obvious if the staff quickly checked on the guy’s room to see if he was okay. Definitely some plot convenience here, but the rest of the film played it pretty straight.

Overall, It was nice to see Holmes get to work in America. To be honest, it’s not as if the scenery looks all that different in this film, but it’s still good to see him moving to a different place for a change. I also like how naturally the villains own a fake antique shop as nobody in America realized that they were buying fakes. Considering that the villain’s whole angle was built around him being the most trust worthy and reputable person in Washington I have to question why he took such a risk. If it was discovered that his whole store was full of fakes that would have really hurt his credibility don’t you think? I guess this guy just likes walking on the edge. If you haven’t seen a Sherlock Holmes film yet then I definitely would say that this is a fair jumping on point. It’s still in the WW II tie-in days so it’s not your standard Holmes case, but it’s a mystery nonetheless.