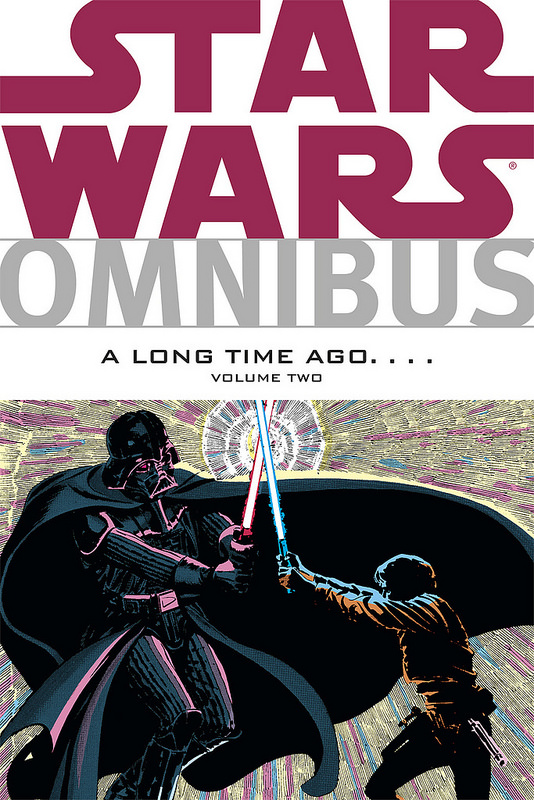 It’s been a while since I read the first Star Wars Omnibus but now the second one is here. It adapts the second movie so I’m guessing that the third one will wrap up the original trilogy. The volume also has its own plot going on with some connected stories and a few that are essentially stand alone. It’s a fun collection and I’m sure fans were glad to have these issues around while waiting for the next movie.

One of the main plots is about Han Solo. Jabba The Hut still has a large bounty on his head so Solo wants to clear the debt. He actually does manage to find Jabba and forces him into dropping the bounty. Unfortunately as soon as Solo leaves the bounty is placed on once again. It’s definitely the best plot in the volume though simply because Han is the most enjoyable character whenever he pops up. You just have to like his confidence. When the other characters are panicking he is coming up with more plans. Han also doesn’t hesitate in launching an attack against Darth Vader even if it is unsuccessful. Of course with how the volume ends it could be a little while before Han shows up again so definitely enjoy his appearances here while you can. That should not be very difficult though.

Meanwhile Darth Vader also gets his own subplot as he chases after Luke and the gang. He lands on one planet where a cyborg has decided to silence the only informant who knows the name of the person who destroyed the Death Star. Vader needs that name so naturally the two come to blows. Vader is basically untouchable here as you would expect but I do give the guy props for effort. He held Vader back long enough for the informant to get away. It was a rather dark ending though as the only way for the guy to get away was to die. It’s one of the few times where Vader was foiled, but he still did win he fight.

Another fun Vader comic is when he shows up on a bank planet for diplomacy at the same time Leia arrives. No weapons are allowed on this planet so both sides have to try and outsmart the other in different ways. It’s a big game of mental chess between be two sides with the highest of stakes. As you can probably guess Vader tends to have the edge here, but to say that Leia lost would be a simpflication. She still achieved her objective, she simply wasn’t able to prevent Vader from doing he same so if anything it is a bit of a draw. A very unique Star Wars comic through and through.

Then we have the big movie adaption which covers the film in great detail. It does a good job of getting those who only read the comics up to speed on what is happening. You certainly can’t say that you missed out on what happened at the very least. It quickly switches art styles for the event which was interesting. The new art certainly felt very Marvel esque which was cool. I do think the normal art probably wins but both were quite good. Naturally the highlight of the film adaption is the big battle between Luke and Vader. Beyond that the story holds up pretty well in all of the other scenes as well and is just a good adventure.

Lando seems to have taken Han’s place as one of the main focuses in the series. In his subplot he is flying around and scouting strong fighters for the resistance while just looking for anything that could be helpful. His comic probably felt the most random out of them all as he meets a retired super hero who has decided to stop with the heroics and now he is just a guy who tries to stay out of the way. Lando gives him a speech and the guy realizes the folly of his ways. Not a bad comic but a bit weaker than some of the old ones.

In general I do think that some of the final stories were a bit weaker than the early ones but it’s a fairly small sample size and the Leia vs Vader comic is an obvious exception. Most likely the series will stay pretty consistent even without Han Solo to back it up. I’m looking forward to seeing Luke a little more now that he knows how to fight pretty well. In theory there is no excuse for him to lose to just about anyone now. He is the true last Jedi after all.

A pair of characters who were fun while they lasted were the dictators in the first few issues. One was blinded by Vader and now has to wear cyber goggles while the other one isn’t brave at all and so he is content to be the 2nd in command. These villains may not have been the strongest ones out there, but at least the main one had a lightsaber which made for some pretty good fights. It’s why the first half of the arc was my favorite as we had Han causing mayhem everywhere and these villains popping in more than a few times. Perhaps they will return at some point. In general the character cast in this volume was quite solid.

As I mentioned before the art is pretty solid. The characters all look right and the art is easy to follow. It complements the fast pace of the issues and also works pretty well for the fight scenes. The writing is on point as well with a lot of clever dialogue from all of the characters. I’d certainly expect no less.

Overall, This is definitely a great follow-up to the last installment. Han will be missed, but the series will live on. If you are a big fan of the movies then you definitely need to check these out. If you haven’t watched the movies yet then you’ll quickly get caught up on what is happening over the course of the first few issues and will still be able to enjoy it. It’s just a quality sci-fi action story so I can recommend it to anyone. Hopefully the third volume continues to be just as strong.