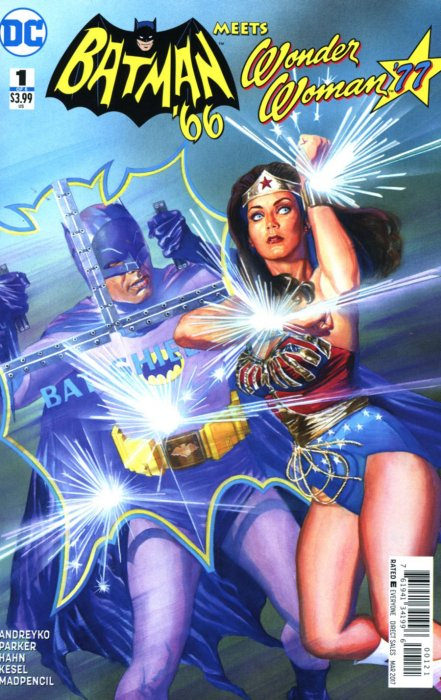 It’s time to look at the big crossover between the retro Wonder Woman and Batman series. As they both starred in different eras the comic decides to have adventures that take place in both along with a third that he even sooner. It’s cool how the series was able to tackle all 3 eras and even added a sense of continuity by making them all connect to each other in some way or another. If we ever do get a Justice League comic with these characters it would definitely be intense!

The first comic takes place when Batman was still just a child. The Nazi’s wanted to obtain a book he owned that would lead to the Pit of Eternal Youth and many other places including Wonder Woman’s home. Ra’s Al Ghul and his criminal organization also wanted this info. Finally, Wonder Woman and government agent Steve Trevor also showed up to grab it. Batman’s in a little over his head here, but he needs to try and get the book to safety while also looking out for Talia. Although little does he know that Talia can certainly fend for herself as she was already taught much about martial arts when she was a kid.

It’s a fun comic and probably the only time we will see Batman’s parents for a while. Talia was probably the highlight here as it’s a nice look at how she could have been as a hero if not for the guidance of Ra’s. She probably would have been an even better Batgirl than the one we are all used to. Wonder Woman had a pretty easy time mowing down the opposing troops herself. Protecting the kids would probably be the toughest part and even that seemed rather simple for her as well. Even Steve got to contribute a bit.

The middle story has Ra’s make his way to Paradise Island. No man can arrive there without an escort so Batman convinces Catwoman to take them there. The villainess has a rather large role in both the second and third stories as she even gets a redemption arc. Her fans will likely be pleased as she does tend to go back and forth a lot but at the end of the day she always does have a lot of potential for good. Batman is rather skeptical the whole time as he should be, but doesn’t make a scene. He also doesn’t have much choice since she asks for sanctuary on the island and Wonder Woman grants it to her.

There’s not too much to say about this comic as it’s very to the point. The heroes fight with Ra’s and his team. We do get a cameo from Wonder Girl which was cool as she stood up to Ra’s. Naturally the comic does its best to keep Ra’s away from Wonder Woman because he wouldn’t last a second against her in an actual fight. Honestly that’s why Batman’s villains stay back for most of this collection as well. They can give the Dark Knight some trouble, but Wonder Woman? They are of no consequence to her and that’s considering that this isn’t even close to her strongest incarnation.

In the final story we have Wonder Woman head back to Gotham because Ra’s has returned once more. You have to respect the fact that he keeps on coming back for more each time. The guy just never gives up. Unfortunately she finds out that Batman has retired and now Robin is the only fighter left. Wonder Woman can’t accept this and convinces Batman to come out of retirement. Granted, he basically has to make this choice since Ra’s finds out about the Batcave and brings the fight to him. A more serious Bruce Wayne rejoins the fight and it’s a pretty fun climax.

This is the story that ends off the collection and it’s certainly a great pick for it. Aside from the fact that the stories were intentionally chosen in chronological order, it just feels like the most epic adventure from the 3 with the highest stakes. Ra’s is finally taken out of the equation as well so in theory the heroes no longer have to worry about him. That will certainly be a big relief for them.

The characters were all on point as you can probably guess. I’d say that Wonder Woman looks the best here as she looks out for humanity and saves the day many times. Batman isn’t as impressive since he gave up at one point, but did recover quickly and beyond that he looked solid as always. Robin still tries hard whenever he pops up and it was nice to see him as Nightwing. He deserves his share of respect at that point since he is a veteran and the heroes give it to him.

The artwork looks pretty solid throughout the issues. The character models are on point and the action scenes look nice as always. It’s not quite up to par with the mainstream DC adventures but it does a good job of recreating the look of the old shows. The panels all stand out so it’s always easy to see what is happening at a glance. Even though there is quite a lot of pages in this collection, it will all be over very quickly with how solid the writing and pacing are. This will come to no surprise as both individual series were always very good in these two areas though. If anything the writing is why these titles got so big in the first place.

Overall, This collection hits all the right notes. It’s a crossover where both heroes get a lot of tim to shine. It’s definitely interesting to see a more serious Adam West here even if you will miss the light one from the second story. I suppose that is definitely setting him up to play the role of Batman in Justice League as one more people would be familiar with from newer stories. That or since he was re inspired by Wonder Woman, he will go back to his usual style in time. Either way, hopefully we actually do get a Justice League story soon. That would definitely be a lot of fun.