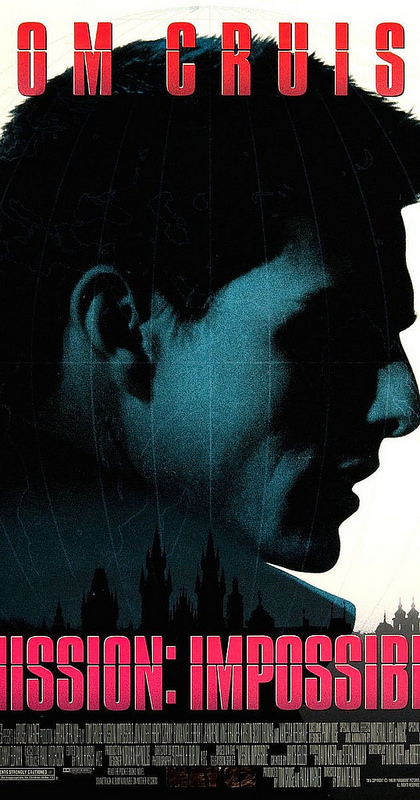 It’s time to take a look at the classic Mission Impossible films. First up is the original one of course. This started the long streak of success for the films and holds up quite well. It’s still a great action film with tight pacing and good writing. It also has the most memorable “Impossible Mission” set up with the heroes trying to break into the room that has so many different sensors.

The film starts with Ethan Hunt and his team heading into a big gala event to stop someone from stealing a list with the names of every operative who is in the field. Unfortunately it seems like the villains were waiting for them as all of Ethan’s friends are murdered one by one. Ethan is now suspected of being a traitor to the cause so he goes dark. Ethan realizes that he will have to infiltrate the villains circle of trust in order to find the guy who framed him. It seems like he will be alone in this mission but Claire shows up later and says that she managed to get out of the car before it blew up. That’s suspicious but Ethan has bigger things to worry about like revenge. He hires two former operatives to help him and the team prepares for their mission.

One of the big ironies here is that to gain the trust of the villains Ethan Hunt actually ends up breaking into the CIA himself to steal the very list he had been trying to defend earlier. Talk about a full reversal of roles here right? It reminds me of how annoying it always is to see the villains pull off a heist like this in films like White House Down or Olympus Has Fallen and naturally you don’t feel the same way when the heroes do it. It just goes to show how important the roles are here although the guards should have known better than to allow the firemen inside. Seems like a very suspicious setup…at least follow them right?

The main Impossible theme is catchy as always. It’s a tune that is easily remembered and has become very iconic over the years. It shows up multiple times here and even gets a remix at the end. Whenever music pops up here it is definitely fitting, but of course this was the highlight. Mission Impossible also has a lot of great visuals in the film like when the explosion propels Hunt onto the train or when he escapes from the restaurant with water exploding behind him. It could easily pass for a 2010 era film.

Ethan is pretty much the ideal main character. He’s a great field commander who always gets the job done. Even when everyone else is getting bumped off he tries to get in on the action to try and at least save someone. It doesn’t quite work out so well though. Then he quickly gathers his wits and moves in to find the real culprit. Unlike many other leads who freeze or start to panic when things go wrong, Ethan never has a moment of weakness like that. Even when he was talking to the CIA commander early on he immediately realized that something was off. It was the same when someone showed up from the grave trying to plead that he was innocent. Most main characters actually buy this for a moment but Ethan didn’t even entertain the notion. He’s certainly not perfect as he doesn’t see through another deception as quickly as he should have. He let his emotions get the better of him there which was unfortunate, but for the most part he made no mistakes. I also liked the masks he wore in this film as I forgot he used to do that.

Claire is the main heroine. She somehow managed to survive the initial sabotage which was certainly nice I suppose. Her character goes through a route that is a little predictable nowadays, but certainly much less so when this film originally came out. She’s a reasonable character I suppose, but one that can seem a bit sketchy at times. Her husband was murdered so you’d think that she would keep her distance from Ethan a little more of give him the cold shoulder. We have to keep this professional right?

Jim was Ethan’s boss before he was murdered. It’s easy to see why he typically wouldn’t be a field agent since the guy is just so old. The moment someone started tailing him you knew that the guy was doomed. He’s a bit of a generic character, but a reasonably good one I guess. He certainly enjoys living in fancy hotels but claims that he hasn’t lost his edge. I wonder about that, but the bosses in these kinds of films don’t typically end up doing all that well.

Luther is one of the two agents that Ethan hires to help him out on this mission. He’s definitely very well equipped to handle the data hacking and I can see why he became a fan favorite character by the end. He’s pretty confident and also has his morals unlike the other guy. Luther wasn’t going to let the villains actually leak out the codenames while Franz didn’t really care. Franz is the more annoying agent who isn’t always great at his job and only cares about the money. He even comes close to actually murdering someone. You’re definitely not meant to root for this guy.

One character who is an antagonist here, but still a fun character is Kittridge. Of course he isn’t correct in his hunch that Ethan is the mole, but at least the guy is trying to get to the bottom of this mystery. He’s fairly intelligent and comes up with a good plan to try and lure Ethan out. He’s also at the ready when he notices suspicious activity during the climax. Cutting a deal at the end may have been morally dubious, but it did seem like the villains would get away otherwise. He’s not exactly a hero, but he’s a very interesting character and a guy who is quite good at his job. If he wasn’t up against Ethan then he may have had a shot here.

Overall, This film was definitely a lot of fun. It’s probably got the biggest stealth aspect to it compared to the sequels as they became a lot more action oriented. Here we even get a lot of mystery aspects as players keep changing sides and you don’t know who to trust. The mystery angle is played quite well and the writing is always engaging. If you haven’t watched this film yet then now is the perfect time to do so since the new film is coming out soon. You’ll want to see for yourself why this is considered the best secret agent film series at the moment.