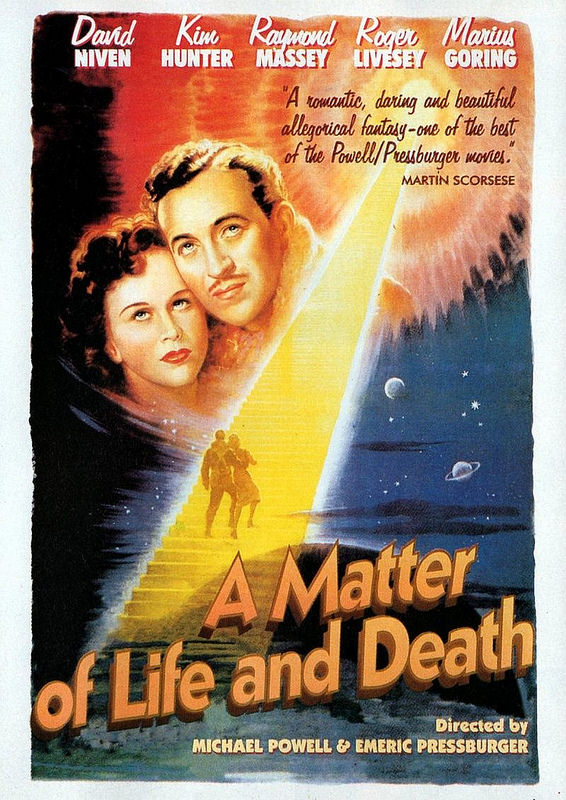 It’s time to look at a really old British film that hit the big time. You have to keep in mind its origin for the court scenes to make sense at the end since they bring up America quite a bit and you have to remember that the protagonists are not from there. It’s a fun film that may drag a little bit at times, but brings along with it quality writing and suspense. I’m always up for a good court case after all.

The film starts with Peter losing a dog fight against a skilled pilot and crashing to his doom. As he is incredibly high up he takes the time to make one last call to command. There he speaks with a lady named June who tells him to man up and not give in so easily. He rejects her advice and makes a big speech before he crashes. Peter wakes up the next day and realizes that the money he paid for the air cushions was well worth it since he survived. He decides to get together with June, but that’s when the advocates of death arrive. Agent 71 explains that Peter should have died and it was simply an administrative error that caused him to live. Peter sues 71 for negligence and so they decide to take this matter up with the cosmic courts. Can Peter prove that he should be allowed to live for a few more decades or will he be booking a one ticket stop to his doom?

I can’t say that I was a big fan of Peter to be honest. The guy just gave up way too easily and seems to be a glass half empty kind of fellow. He was given days to think about who to represent him in the trial and could choose from literally anyone, but he still can’t decide. He’s rather slow on the uptake and while he was confident at first, by the end he is basically begging for mercy. I don’t know what happened to this guy, but he could have handled this situation a whole lot better.

June is a good heroine even if the romance between her and Peter is incredibly rushed. You never really find it all that believable since they fell for each other before even meeting. That’s a bit of a stretch right? June is willing to make the tough calls in order to help Peter and she also decides not to lie to him at the end so that was good. Frank is the local doctor and he handled the situation pretty well. His sci-fi table that lets him see the whole town was a bit of a stretch and at first I thought he was an inside agent but it shows that he is an unparalleled genius. He did a good job defending Peter in the court.

Naturally I am on Peter’s side in this debate. Even if he only kept his life by accident he now should have the power to live it out. Correcting the mistake by destroying him wouldn’t be the right move. The back and forth was pretty interesting in the court although most of it wasn’t actually about this as it devolved into talking about how America keeps messing with everyone and that nobody likes Britain because they are always attacking people. Seeing them fight with the radio and everything else was definitely pretty fun. The other world does seem rather corrupt though so perhaps in a sequel there would be an uprising if it decided to go in as an action film.

As I mentioned the writing is pretty solid. All of the characters sound reasonable and at least they try to back up their points. For the pacing, I think it may actually be towards the end where it drags on a bit. As I mentioned, they tend to diverge on their talking points in the court and as a result they stay off topic for a long time. It may be because there is only so much you can say about the actual case since it’s a pretty black and white yes or no, but I’m sure there are more nuances that could have been brought up.

Slow burner or not, the plot is definitely pretty unique. It’s definitely a fun Utopia for everyone who died since they basically get to do whatever they want. I have to assume that there aren’t too many things to do during the day though judging by how many people attended the trial. Surely most of these guys wouldn’t actually care about something like that as long as they could play their sports or watch TV right? Maybe I’m underestimating these guys.

Overall, A Matter of Life and Death is a fun movie. The main message we can take from this is that you should not throw in the towel so easily. You always gotta try to make the emergency landing even if the odds don’t look great. Meanwhile, the surgeons looked pretty good at the end and so I don’t mind them believing that they are the reason that Peter is still around. What they did likely aided his chances of victory as well and it would have been ironic if he won the case, but then died if they messed up the surgery. Yeah…that would have been pretty dicey! So, I’d recommend checking this film out if you’re in the mood for a fun court case, just be prepared for it to be a long one with a little less fire than some of the other court cases we are used to.