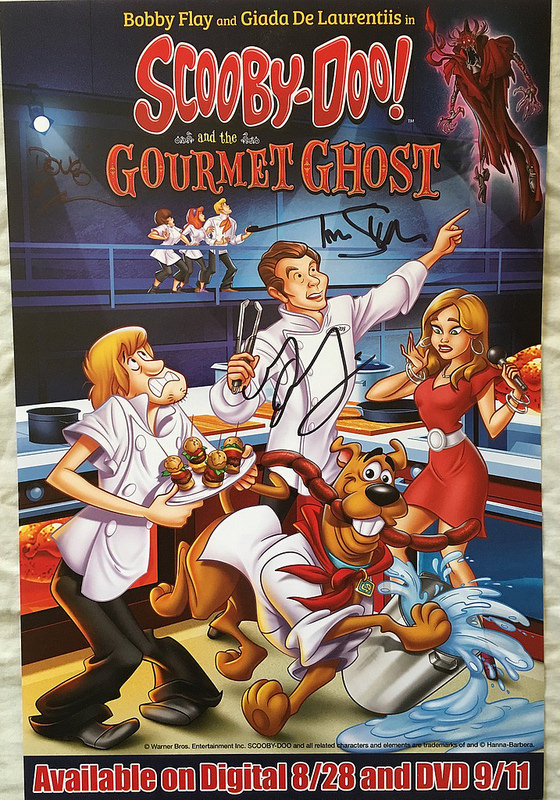 It’s time to look at the recent Scooby Doo film. This series has definitely been a fun one that adapts over time. The first few films took themselves rather seriously with life and death stakes at play. This gradually changed as the films got a little more self aware and decided to play around with the ghosts. Nowadays the series likes to poke fun at itself while heading to the goal. It’s not necessarily a bad thing as the humor tends to work well but I will say that the original films still tend to be the best ones. This one is a solid installment that plays out like you would expect. It’s entertaining even if it’s nothing groundbreaking.

The film starts with the gang getting ready to head over to the manor of Fred’s uncle. He is a famous cook who really knows how to get a nice dish on the fryer. Shaggy and Scooby are glad to finally be somewhere where they can eat to their heart’s content. They’re naturally pretty thrilled, but it turns out that this vacation may not be all fun and games. A local ghost has shown up and is terrorizing the cooks. It looks like the uncle might have to finally sell his place to a very eager real estate agent who has been visiting lately. Fred decides that the gang will have to put an end to this, but how can they possibly compete with a supernatural entity like a ghost?

We’ve got a few suspects on the docket for this film. First off we can probably eliminate the guest stars. I mean, the uncle and the other cook could possibly be the crooks I suppose, but doing that to a celebrity guest star would be pretty surprising. On that note, we’ll start the suspect list off with Noseworthy. His name is pretty memorable so you won’t be forgetting him. He’s a disgruntled guy who manages to fields for the cooks. Unfortunately he has a habit of trying to scare off the guests and always brings up the ghosts. The guy was fired but still lives on the land to prove that he can. His motive is clear and the guy is pretty suspicious. Keep an eye out for this guy.

Then you have the very mean cook who is always throwing knives around. She’s rather obnoxious which is a pretty good reason to be the crook already. I have to mention here that from all of the comedy gags in this film hers was the only one that I thought fell flat. It’s not a very funny subplot with her running around making threats all the time. She comes off as mainly a time filler who doesn’t actually contribute to anything that is happening on screen. Without her the film’s pacing would only get better. Then we have the real estate agent. Naturally he wants to buy the place now that it’s pretty cheap. Pretty convenient timing eh? This kind of character seems to show up in just about every Scooby Doo film, but his presence is appreciated nonetheless. He’s also a fun character to be honest and keeps everyone honest. You need a selfish character like this one to provide a nice contrast to everyone else.

There’s also a big fan of the uncle’s who is also one of the biggest writers out there. He wrote a book about Fred’s ancestor who used to be a great war hero during the Revolutionary war. He has built his life around the guy’s reputation and has a lot to lose if any scandals got out. Maybe he needs the place closed down to save his legacy. The whole reputation business is a big subplot here although it’s one that is almost comical to an extent. So, this ancestor was a double agent who was working for America against the British. This is public knowledge. However, the heroes find a book that suggests he was feeding the enemies intel about Washington and his troops. Now, one assumption might be that he was actually working for the British all along, but I like to think that your first thought would simply be that he was keeping up the act and it was false intel. Why suddenly believe that he was turned all along? It leads to some twists and drama of course, but I think the heroes should have had more confidence in him.

The Mystery Gang is basically the same as always. This time around Velma and Daphne don’t get a whole lot to do since this is Fred’s movie. Shaggy and Scooby have a large role in all of the films regardless of who the focus is on so often times out of the main 5, 2 are left out. Daphne and Velma do good in the scenes that they’re in which is good. Fred’s the standout here as he does his best to keep the villains down while saving the food industry. Shaggy and Scooby also have some pretty meta moments like when they admit that they often pretend to be scared so they can score some grub. Depending how seriously you take this quote it has a lot of serious implications. Well, I suppose that’s why they say it’s always good to have these two in your corner. Scooby still comes across as very petty next to Shaggy though. He’s constantly stealing food from the poor guy even when Shaggy is always careful to share the food equally.

We’ve also got some cats running around who are fun enough. I don’t ultimately think they had much of a purpose being here, but at least Scooby isn’t the only animal running around now right? From the two celebrities, the best one was probably the heroine. She learned self defense and many forms of combat as a hobby which lets her help the team out when the ghost shows up. When you consider the fact that she can fight, you’ll probably just start to wonder why they’re running at all. Surely the group can handle one ghost right? Meanwhile the uncle bakes some mean cookies so that’s something to be admired. I could go for a few homemade chocolate chip cookies myself to be honest.

Overall, The film is pretty fun. The pacing is solid and the adventure goes by very quickly. Aside from the old lady the humor was on point. The characters don’t come across as overly annoying or anything like that. If there was anything else that was a little weak for the film it would be the ghost. It probably has one of the worst designs for a villain that we’ve seen in Scooby Doo. It’s played a little more for laughs than usual and he could have looked a whole lot more intimidating. It is what it is I suppose, but giving the heroes someone to really fear would have gone a long way.