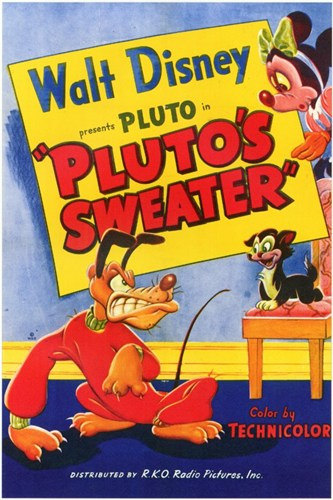 It’s time to look at an old Disney special about Pluto. Pluto typically can’t hold his own special as well as Donald or Mickey but the character always has potential. After all, Snoopy ended up becoming quite the hit in Peanuts even if their circumstances may be a little different. This special is also a lot less tragic than Pluto’s last one which helps quite a bit.

The general premise is that Minnie has made a new sweater for Pluto. The problem is that she’s not the smartest character on the block and made Pluto a pink sweater despite knowing that he wouldn’t want to wear such a thing. She forces it on him and Pluto spends the remainder of the special trying to get it off. It’s tough because the sweater is sentient and wants a host so that it can continue to survive and thrive. Honestly it really isn’t a bad strategy when you think about it. The sweater just wants to live so you may be rooting for it.

Naturally as with most of the Disney special this one is only a few minutes long so it goes by real quick. The pacing is on point and it stays interesting throughout. As I mentioned this special isn’t tragic which is definitely important. There is a cat that mocks Pluto for a while, but eventually the tables are turned and it learns that embracing the sweater ultimately isn’t a choice. You just have to roll with the punches, better now than later. Pluto is now safe once more, until next Christmas.

As far as the animation goes it is just as solid as the rest of the Disney specials. The colors are all pretty vibrant and the characters are on point. Consistency is the key to success and it’s an area where Disney has excelled for years and years. There is always something happening on screen whether it is in the forefront or in the background. Part of what makes the specials a lot of fun is how chaotic and energetic the animation is. It’s something that you simply can’t duplicate with traditional CGI or some of the more low budget hand drawn stuff that you see nowadays.

I do have to say one last time that Minnie wasn’t a great character here though. She is brought to tears way too quickly and basically starts to guilt trip Pluto. Naturally the fact that she didn’t notice how much Pluto didn’t want to wear the sweater is used for comedy, but it doesn’t make you any more likely to take her side. If she had noticed that Pluto didn’t want to wear the sweater then she probably wouldn’t have felt quite as bad about it being shrunk down to size.

Overall, Pluto’s a fun character but I still do think he can’t hold his own specials quite as well as Mickey of Donald. That’s not to say that the special is bad or anything, but the other two just add an extra element through their dialogue that Pluto can’t match. He has to rely on pure animation as a visual medium which is fine, but it just won’t have the same impact as the others. How could it? Dialogue (With good writing) is just too powerful to be matched in most situations. If you haven’t seen this special yet then I would recommend checking it out. You’ll get to see the sweater in action and what could be a greater honor than that?