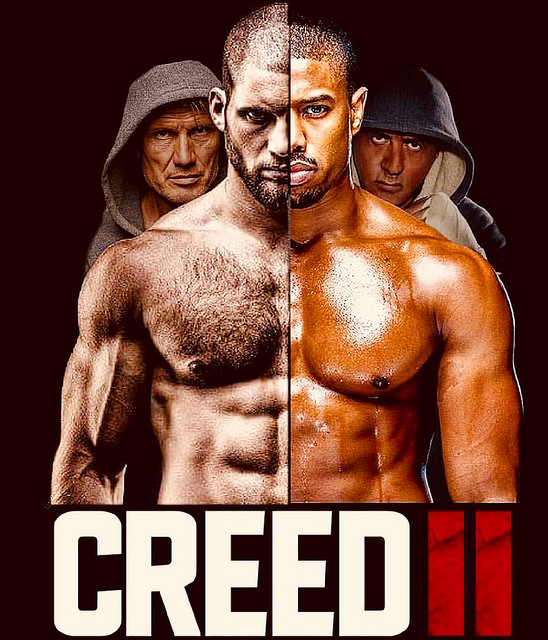 It’s time to look at the new Creed film. While boxing movies may have never become a huge genre, it was always one where you could immediately think of 5 films. That’s because the Rocky series exists. It set a really high bar for the genre so then when it left you couldn’t help but miss it. When the first Creed film came out it worked as a nice sequel to the franchise. Now we could finally see a whole new generation of fights. While I believe the first film holds the slight edge, this movie does a good job of staying on the same level and certainly delivers with the fights.

The movie starts with Adonis claiming the heavyweight title from another guy. He is now the world champ and has begun to settle into his role as a master. He and Bianca are starting a family and things are going well until Viktor shows up. He is the son of Ivan Drago, the guy who murdered Adonis’ father. Naturally Adonis has a hard time trying to refuse Viktor’s challenge and decides to get into the ring once more. The problem is that Adonis is a quick fighter, but his hits don’t land a lot of damage. If he isn’t careful then it’s going to be all over. He has nothing to gain while Viktor has nothing to lose.

From the start of the film’s trailers and plot summaries I was a bit dubious about Adonis’ decision to fight. Of course it’s all very personal to him of course and he brings up the fact that Rocky essentially did the same thing, but it was a little different. In Rocky’s defense, Ivan murdered Apollo right in front of him so he had to get in there and avenge him. In this case, it’s all behind Adonis, but he just wants to prove that he can win where Apollo did not. Adonis can bring honor back into his family name. He trains and everything so it’s not like he walks into the match blind, but I do think it certainly wasn’t a great call on his part. If you gotta take the fight then take it, but don’t block everyone out in the mean time. Adonis even pushes Bianca away for a while during this period.

By the end of the film Adonis has realized once more what is really important and effectively ends his character arc..until the sequel. While he may have had a few rough patches I would still say that he is a pretty solid main character to root for. Meanwhile Bianca has her music plot although it doesn’t get a whole lot of screen time in this installment. From what is shown we can tell that Bianca is doing quite well though. I’m glad the film didn’t try to go for the “Adonis is jealous” route here as that would have been petty. Adonis is certainly not that kind of character. Bianca’s definitely a solid heroine and it looks like her career will keep going on in the next film as well. I don’t know how long the shelf life for a boxer is but there’s a good chance she will outlast him.

Viktor is the main villain here and he definitely looks a lot stronger than the guy from the last film. In fact, the film makes him look so powerful that you may have a tough time believing that Adonis can hold his own at all. The guy is just way too strong and Adonis’ hits don’t have nearly as much weight. There’s not much to Viktor aside from being the villain here, but I’d say that this works pretty well. All you really need to know about Viktor is that he wants to win to please his father so naturally his drive is very strong. At the same time he definitely fights dirty so I don’t think you will be forgetting that he is the villain anytime soon.

Rocky still serves as the main mentor role here and does a good job in it. His fighting days are certainly gone, but he’s still an excellent coach because of his experience both in and out of the ring. Since he overcame the health problems in the first film they aren’t a concern this time around. While it would be nice to see him fight as a homage to the old films it isn’t all that realistic because of how old he is. When Ivan shows up you get the feeling that the guy can still fight, but Rocky is certainly not in a condition to do so. He still gets the good one liners in though. Meanwhile Ivan is a pretty solid villain like Viktor. His only failing I’d say is that the guy puts way too much stock in trying to impress the Russians. He really shouldn’t care after they abandoned him. I suppose his national pride blinded the guy until the end.

Sort of a side note, but it was nice to see Max here. He’s always pretty fun on ESPN First Take so seeing him here was pretty surreal. If anything it made the boxing matches feel a lot more realistic and legit here compared to previous films. The movie does a good job of making you feel every blow. You can instantly tell which shots had glancing damage and which ones really made the character feel it. For the big comeback punches you’ll have the slow-mo feature at the ready. I’m sure that a big reason why you will be watching this film at the end of the day is for the fights so they do deliver.

As for the soundtrack, that one is definitely a step below the classic Rocky films. The new tracks just aren’t nearly as inspirational. They don’t make you feel like it’s time for the hero to take down the opponents and save the day. They may be fast paced tunes, but I can’t say that the lyrics seem all that great. Even the script can be a bit weaker than the old films as it has a bit more language. Nothing too bad, but still just enough that it can be a bit noticeable.

If there is any other weak aspect of the film it is definitely the romance. It did take up quite a bit of time and I think the first film already had that plot completed. The extra drama we got here could feel forced at times. It seems to be resolved though so I’m assuming that for the third film it won’t really be a factor. I’m still wondering what that film will be about, but I’m betting that somebody arrives to challenge Adonis. It would just make sense right?

Overall, Creed II is a solid boxing movie and works as a good sequel to the first Creed. It’s got everything you would want to see in this film. It’s reasonably long with solid pacing so it never feels like it is being dragged out. The main cast of characters are all rather solid. If the film intends to redeem Ivan and Viktor by the end I have to say that they still have a lot of work to do. I still consider both to be villains. While Adonis may not have looked quite as good as in the first film I think he’ll be back at his best for the third film. I hope they get Max to sign on for the third film as well since his insight is always appreciated. Of course, throwing in Skip Bayless or Stephen A. Smith would also be exciting. If you haven’t seen this film yet then I would definitely recommend doing so.